This Defense Contractor's Numbers Are Hiding Something

In early 2013, Edward Snowden made a decision that put him on national news.

While working for the National Security Agency ("NSA"), Snowden leaked classified information to the press. You may have seen one of the countless articles about it... one of the few books... or even the 2016 movie.

Snowden had various job descriptions, depending on who you ask. In any case, his job allowed him access to some of our country's greatest secrets. He decided these were important enough to share with the world... and in March 2013, he leaked them.

The fallout after led to criminal charges against Snowden, which he avoided by fleeing to Russia for asylum. It also led to a deep look into U.S. government secrets, and how we protect them. And it led to a real examination of Snowden's employer.

The company offers various consulting solutions and works closely with the U.S. government. Booz Allen put Snowden in his role that gave him access to state secrets. And as a result of the leaks, Booz Allen faced blowback as well.

So while the Snowden story is the most famous, there are a number of similar stories you may have heard about recently. In 2016, Harold Martin was arrested for stealing government files while working at Booz Allen. And in 2017, an unnamed employee left thousands of sensitive files on an unsecured Internet server.

This gives us a picture of how poorly things have gone for Booz Allen lately. And the company's struggles play out in the numbers. Take a look...

The above chart details the profitability of Booz Allen since 2010, in terms of return on assets ("ROA"). From 2010 through 2014, ROA moved higher pretty consistently. However, after Snowden, improvements have stalled.

Since 2014, ROA has flatlined at 10%. Booz Allen hasn't been able to win the business that would drive expanded profitability.

This makes some sense... After all, Booz Allen has a business based on trust. When its customers' trust starts to waver, earnings can't keep growing. A 10% ROA isn't exactly knocking the cover off the ball.

So, investors could be justifiably confused when looking at Booz Allen's stock performance. The stock has returned more than 280% since early 2014. Meanwhile, the S&P 500 Index has returned about 70% since then. That's more than four times the return of the overall market!

Actually, it's the numbers that are wrong. The as-reported financials don't tell the whole story. Looking at as-reported ROA distorts our view of corporate profits and leads to confusing conclusions.

As you know, we specialize in Uniform Accounting – a more reliable way of looking at companies than the GAAP and IFRS accounting policies that distort the way we think about companies like Booz Allen.

When we apply our Uniform Accounting Framework, we remove distortions like accounting for goodwill, operating leases, and stock options. With these adjustments, we can see that in fact, Booz Allen had a 38% ROA in 2018 – up from 33% in 2014.

The company had a hiccup in 2017 as a result of those issues we mentioned... But it has since bounced back. Booz Allen's strong performance has supported those 280%-plus returns, and now we have a clearer picture... 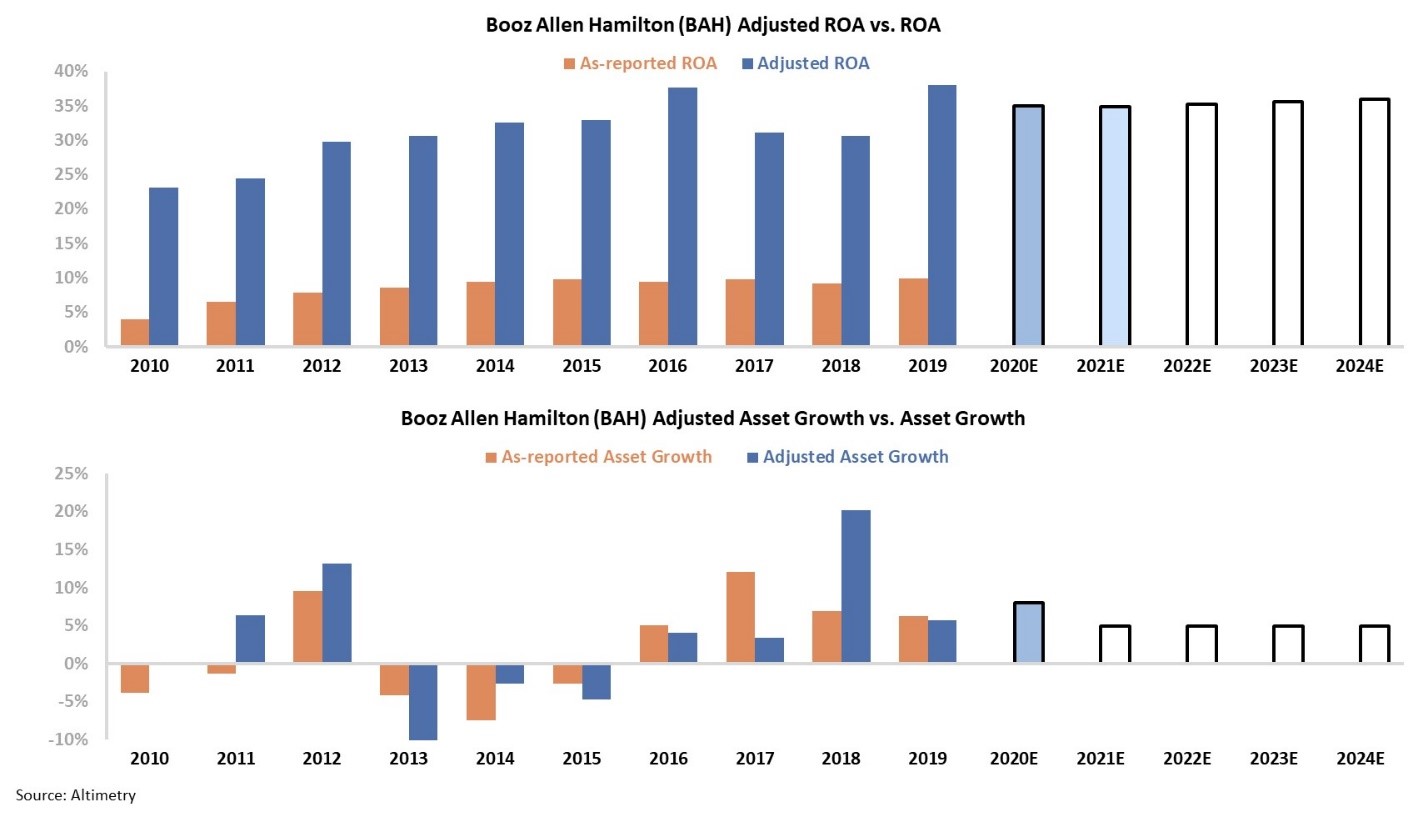 The two panels explain the company's historical corporate performance levels, in terms of ROA and asset growth (dark blue bars) versus what sell-side analysts think the company is going to do in the next two years (light blue bars) and what the market is pricing in at current valuations (white bars).

At Booz Allen's current valuation of 23 times adjusted earnings, the market is expecting the company to keep doing what makes it money (and stop with the leaks) – that's what the white bars show. It makes sense now that valuations are high.

Investors are likely wondering why a stagnant-return business with trust issues gets a high valuation. Why would the stock quadruple the market's return?

As-reported financials are the reason for this confusion. Booz Allen's strong performance since 2014 completely warrants the stock performance. And that's why this isn't the screaming short it initially looks like it is.

When you apply Uniform Accounting standards, you can avoid the confusion and see the real profitability of a company.