When the coronavirus pandemic first spiked in the U.S., the country saw its fastest and most material contraction in a generation.

With folks staying home, fear of a complete spending shutdown had economists worried about a deep, long-lasting recession.

The government quickly put those fears to rest by providing Americans with stimulus checks to bolster bank accounts. Consumers put those funds to use by investing in the market, purchasing home goods to make their at-home experiences more enjoyable, and working on household projects that had fallen by the wayside.

Once the worst of the pandemic was in the rearview mirror and the stimulus checks stopped arriving, economists pointed to a worrying trend in consumer spending... Specifically, credit card spending was rising... and fast.

Consumers were anxious to get back to their normal lives and were putting money to work. Some worried this spending pattern was the result of a "slingshot" effect – consumers had underspent for so long that now they may be spending more than they're able.

Spending on travel, eating out, and purchasing discretionary goods such as clothing ramped up as people sought out social events that had been paused for a couple years.

Luckily, bank accounts aren't struggling to keep up with spending...

Such a rapid rise in credit card spending could look concerning out of context. It could mean, heading into a rising inflation environment, Americans are struggling to pay with cash and are instead kicking the can down the road by putting more goods on their tabs.

Many were worried that this increased spending, combined with lower cash, would mean that individuals were getting riskier. Fortunately, the data show quite the opposite.

Even with consumer spending recovering nicely, credit card balances are still 8% below pre-pandemic highs, and in fact, are still right around 2008 levels.

And to boot, bank account balances remain almost 40% above pre-pandemic levels, even for "higher risk" clients with subprime credit scores.

Individuals with lower credit scores are the most likely to run up charges on their credit cards when they face a cash crunch.

They are also more likely to be hampered by credit card debt, as they are offered the worst interest rates and oftentimes have jobs that are the first to go in tough times.

But having high balances in their bank accounts just proves that even as the government avoided dishing out additional stimulus checks to U.S. consumers, liquidity remains high.

The data back up the eye test...

For those keeping an eye out for potential recessionary concerns, this should also come as a big sign of confidence in the economy.

Consumer spending constitutes nearly 70% of total gross domestic product ("GDP") production and is crucial for the health of the economy.

That's why concerns about customers tightening their wallets on discretionary purchases is often the first sign of troubled times.

In this case, continued spending growth in the U.S. should only fuel further growth in the economy. And in the process, it should calm concerns about how much money the typical consumer can afford to spend.

There is still significant capacity for consumers to fuel growth because consumer balance sheets remain healthy.

Not only are credit card balances still below pre-pandemic highs and bank accounts are more flush, but we also see consumers continuing to make good decisions with their credit accounts. 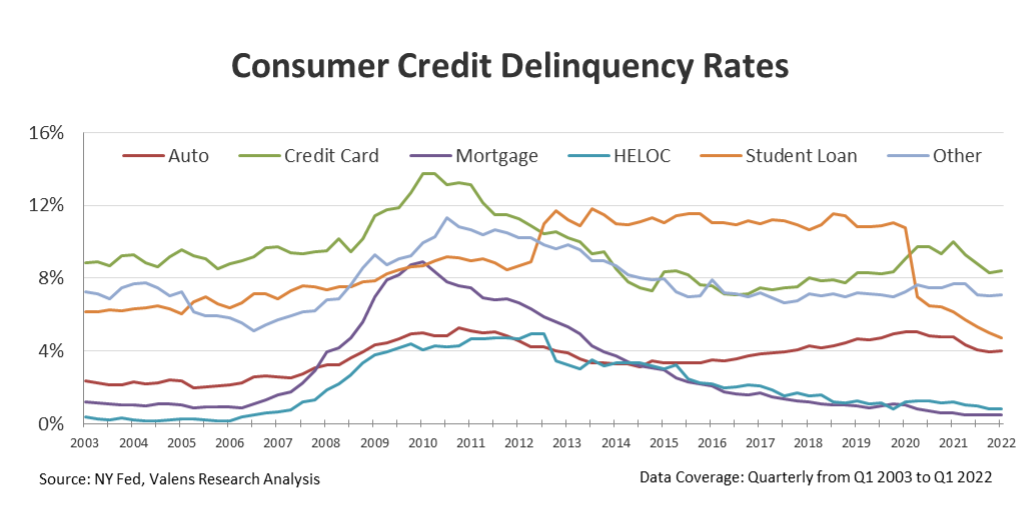 Every credit category has trended safer in the last few years... They are all already down, and they continue to fall to even safer levels.

While some of these rates are buoyed by government pauses, such as student loan payments, other delinquency rates are down without legislative action.

Taken together, it's a great signal that consumer balance sheets remain not just healthy, but also have room to spend to continue to fuel economic growth.

Sleep Your Way to a Better Portfolio

The Texas Power Failure Was Just the Beginning

None of Us Is Homo Economicus