All eyes are on the war in Ukraine...

The world can't seem to look away as Russia, unquestionably a global superpower, is met with fierce resistance in what was previously thought to be an easy conquest.

Much of the world believed that Russia's overwhelming forces would take Kyiv within a week – and that Ukraine would be just the beginning.

But six months later, a different narrative is forming. It looks like, against all odds, Ukraine might actually win this conflict. The country has been on the front foot in recent weeks, reclaiming thousands of square miles of land.

It's clear that Russia was much less prepared for this war than the West believed, especially when Ukraine was handsomely aided by its allies.

Spectators have learned a lot from the events in Ukraine. Now, analysts are turning their attention to East Asia to see if the same lesson applies.

One of the world's other superpowers may be looking to flex its military might in the region... China. The country has repeatedly expressed its desire to invade the island nation of Taiwan.

Based on what's happening in Ukraine, you might think China would have second thoughts about making a move. But defense analysts warn otherwise.

A conflict between China and Taiwan could play out differently than the events in Ukraine...

China wields a much stronger military than Russia. And European countries would likely provide less aid to Taiwan than they did to Ukraine.

Some people speculate that the U.S. won't want to stand up to China in the wake of the Russia-Ukraine war. They worry that by helping Ukraine, we've hurt ourselves by severely depleting our munitions reserves.

China is building its war machine and has already converted its factories to produce more warships and ammo. Meanwhile, the U.S. military hasn't similarly ramped up production.

A recent Bloomberg article claimed that if we were to enter into conflict with China, our arsenal wouldn't be able to keep up... and the results could be catastrophic.

But I believe this theory misses the mark completely.

As I discussed in a recent interview with Daniela Cambone of our corporate affiliate Stansberry Research, China should be concerned – not the U.S.

The U.S. has the largest military production capacity in the world...

Remember, America turned the tide of World War II largely by outproducing the Axis powers. The U.S. came out on top by converting virtually all factories into military suppliers.

The Bloomberg article touched on this idea, and it stated the U.S. would be unable to replicate that feat... But that's because the article failed to understand how the U.S. outproduced the rest of the world.

We recently wrote about how the U.S.'s superior innovation has propelled its economy well ahead of China. But if the two countries go to war, taxes could be the differentiating factor.

You can't fund a government (or a military) on hot air and rhetoric, as much as pundits for Russia and China want you to believe. You need cold, hard cash.

And any government's main way to get cash is through taxes.

Not only does China's ability to innovate fall behind the U.S... its tax base is far smaller, too.

A government can't tax gross domestic product or revenue. If a company's profits are negative, thanks to taxes, it won't be around for long. That's why a government can only tax profits. And no other country produces profits like the United States. 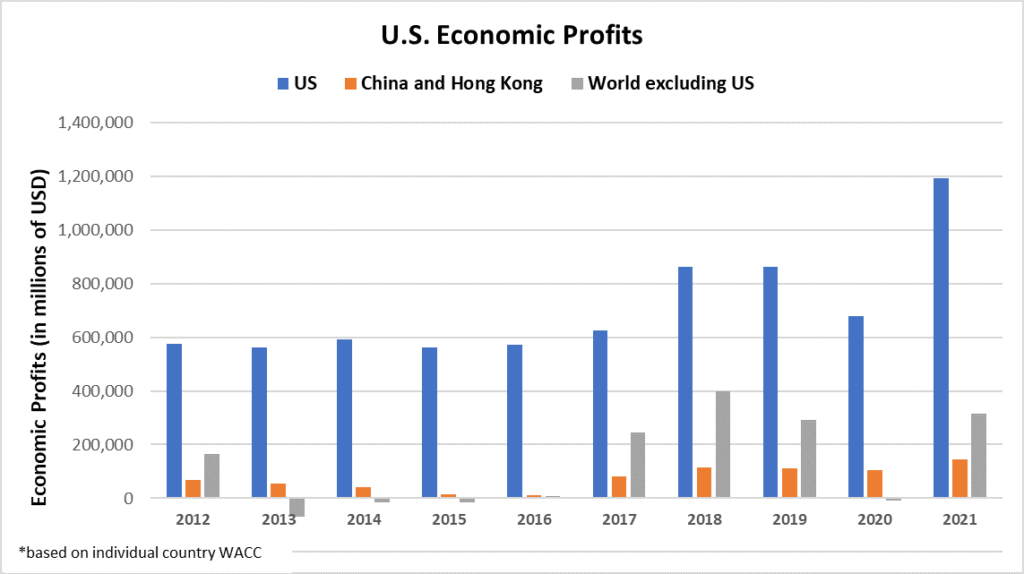 China has a smaller pool of profits. And that means it has a much smaller tax base to pull from to fund its military. That's the first of two main factors used in determining how much tax a country collects.

The second factor is the tax rate. If economic profits represent an entire pie, then a country's tax rate is how big of a slice it takes out of that pie.

Countries must also be careful when determining individual and corporate tax rates.

If rates are too low, the government won't be able to fund projects. But if rates are too high, they become prohibitive to the economy. That stifles innovation and growth, restricting economic expansion and causing profits to stagnate. That means a smaller total pie for the government to take from.

Only one country can afford a full-blown war...

Not only does China have a smaller tax base than the U.S., but it also wouldn't be able to raise taxes to extract more from its economy.

The U.S., on the other hand, can comfortably ramp up military spending, thanks to its unrivaled tax revenue. In 2020, the U.S. generated $3.42 trillion through taxes. China brought in $2.36 trillion in the same year.

That should leave no doubt that in a war between the U.S. and China, the U.S. wouldn't only match China's military production... It would surpass it.

And that's yet another reason why we believe the U.S. will be the dominant global force for the next 40 to 100 years.

P.S. Between the ongoing war in Ukraine... the looming war between China and Taiwan... and the worst year for stocks in 50 years... I get why most investors may feel a little nervous right now. This is exactly why I just joined forces with Marc Chaikin – founder of Chaikin Analytics and a 50-year Wall Street veteran – to answer the hard questions about what's coming next for stocks... and to share our No. 1 recommendation for protecting (and growing) your wealth during these turbulent times.

For a limited time, you can still watch a replay of our online discussion right here.