I remember as a kid reading the works of Howard Ruff, a financial adviser who discussed the dangers of inflation...

The quote that stuck with me the most was, "Calling rising prices inflation would be like calling a hurricane falling trees."

Ruff wrote an investing newsletter and multiple books about investment strategy during the 1970s. Due to rising oil prices and insufficient monetary policy, the U.S. economy suffered from stagflation, which is where prices rise during a period of economic slowdown.

Before the '70s, economists believed there was a direct relationship between inflation and growth... As the economy heated up, more money chased fewer goods – which meant that money lost value. However, economist Milton Friedman argued that inflation was tied closer to monetary policy.

While Friedman's thesis eventually helped to lead the U.S. out of stagflation into the 1980s, financial advisers like Ruff were telling their listeners to avoid stock and bonds and to invest in precious metals instead.

This is because during periods of high inflation, stock market returns are directly impacted. Inflation reached as high as 15% in 1980. And while the Dow Jones was up 15% that year, investors only took home a "real" (meaning inflation-adjusted) return of 3% due to their money losing its worth from inflation.

If investors need to make significantly more in "nominal" (meaning including inflation) returns to get to the same real return in the stock market, how can they get a higher nominal return? They will not be willing to pay as much for stocks. Price-to-earnings ("P/E") ratios will fall, so expected returns will rise.

In October, we talked about how the tax rate can impact the average P/E ratio for the stock market. Taxes and inflation are two incredibly important macroeconomic factors to understand because the valuation of the stock market is directly impacted by these. 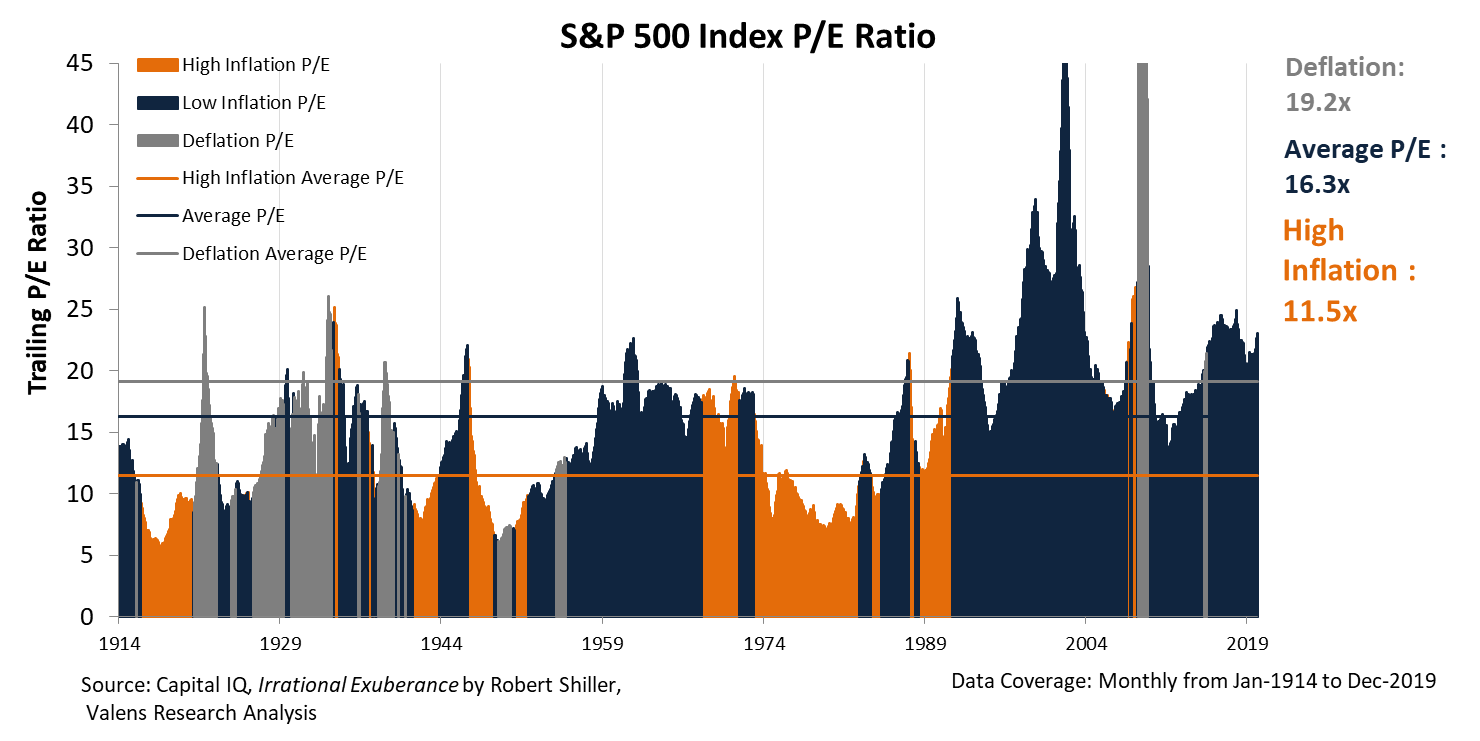 And in the table below, we can see the same information distilled down into low and high inflation environments. In times where inflation is over 4%, average P/E ratios are between 11.2 and 14.4... while during periods with moderate inflation, these ratios range between 16.3 and 20.1. 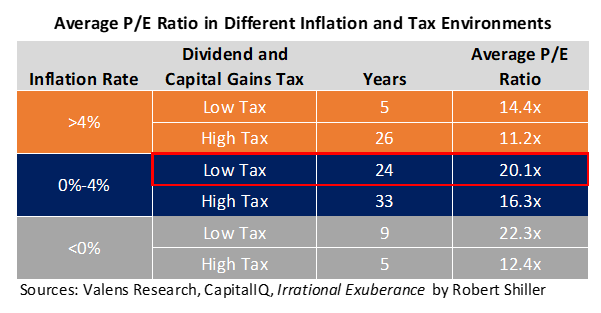 Today, the U.S. is in the low end of the moderate inflationary environment band. Due to tax rates at the lower end of historical averages, P/E ratios are trending to the higher end of the inflation bracket. With inflation below 2% for most of the past five years, an appropriate average P/E ratio for the market should be slightly more than 20.1.

The market's current average trailing earnings multiple is 22.3, which is above median averages. Some analysts would therefore say that the market is overvalued and that we would be near a correction.

To understand if the economy is currently overpriced, it's relevant to use a forward P/E ratio – as the market is priced on what it will do in the future, not what it has done in the past. The market's forward P/E ratio is 19.1, which assumes that earnings growth will continue.

At this level, the market is currently trading below the average P/E ratio for the surrounding macroeconomic environment. Looking at only historical averages, it would be easy to mistake this market as overpriced because of previous inflationary periods depressing P/E ratios.

By taking the current P/E ratio in its correct context, we can see that with continued earnings growth, there's still upside remaining in the current market.

Last week, I visited one of our top universities in the Philippines for recruiting new hires...

It's not enough that the professionals of tomorrow have great analytical and critical thinking skills... All that is naught if you can't write, speak, and convey the results of your work.

I hope you continue to enjoy our communications as we strive to better relay complex issues in finance, accounting, valuation, and strategic analysis.