The Market Is Hinting at an Important Signal... It May Be Time to Listen

Sometimes, the power of the market is just in waiting...

This can be difficult for investors, but doing nothing can be the best move to make.

As legendary trader Jesse Livermore once said, "It never was my thinking that made the big money for me. It always was my sitting." This is coming from the man who shorted the market prior to the Wall Street Crash in 1929 – it's often regarded as one of the greatest trades in U.S. history.

The truth is that an individual doesn't always need to be a genius to be a great investor... he simply needs to know when to be patient. Investors need to wait, and observe when the market is changing in a way no one expects to be priced in.

And anyone following the market over the past two weeks could tell from watching the various inconsistent headlines day to day that no one understood what was causing the market to really sell off.

At a certain point, all an investor has to do is trade with the market. To quote Livermore again, "Never argue with the tape."

Right now, several market experts and strategists are highlighting an interesting signal that no one else seems to be watching. However, it may be starting to show up in the market... and it could be a reason to re-think investing strategies. It may even be part of the actual reason the market has been so rocky the past few weeks.

The interesting signal is the return of inflation... which the market appears to be starting to price in. The U.S. Federal Reserve planned for this, but as Bloomberg highlighted late last month, bond investors in particular should be very concerned...

As we recently explained, inflation has a direct and tangible effect on corporate valuations...

High inflation leads to lower price-to-earnings (P/E) ratios. These lower corporate valuations make sense because higher inflation means the difference between nominal and real gains will widen. Nominal gains aren't adjusted for inflation, while real ones are. This means that as inflation rises, any gains made have less future buying power.

For example, if inflation is at 2% and an investor's portfolio yields a 2% nominal return in a year, that investor's real return is 0%.

During late 2017 and early 2018, inflation expectations were rising above 2% levels. The rise meant that inflation was trending towards levels that could begin to put negative pressure on P/E ratios, thus suppressing stock prices. That was exactly what happened next...

Right now, inflation is well below the levels seen in 2017 and 2018 based on a number of metrics. The 10-year breakeven rate is at 1.63%, the five-year forward inflation expectation is at 1.76%, and the Cleveland Federal Reserve estimate is even lower at 1.34%.

These three metrics are some of the most accurate long-term inflation expectations, and all are saying inflation is relatively low.

Even the Cleveland Federal Reserve's estimate of the one-year inflation rate – which historically has stuck close to 2% – is at 1.55%. Take a look... 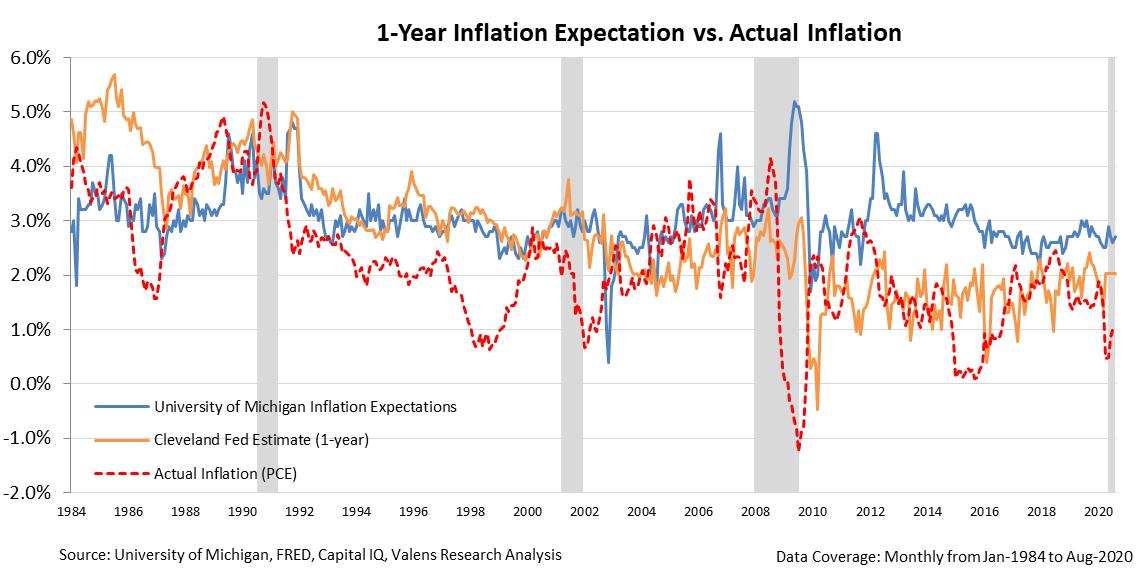 All these low expectations for inflation are allowing the market to sustain current valuations.

Today, the current market Uniform P/E ratio is 24.3. As the chart below shows, the ratio is at its highest level since 2001 (excluding recent high P/E ratios from a forward-looking 2019 basis, due to low earnings for 2020).

Current inflation rates cause little concern... But there are reasons to believe the rate could increase.

First, the Fed has made it clear that it wants to continue to help the economy recover. In doing so, the central bank is fine with inflation rising above 2% in the short run. This is a big change from the policy in recent years, when the Fed has tried to sustain inflation at 2%.

Additionally, the breakeven rate – a market-based measure of inflation – has signaled worrying trends. After the 10-year breakeven rate plummeted to a low of 0.47% in March as the coronavirus pandemic escalated, it has since shot back up to its current level of 1.63%. If the trend from recent months continues, this rate could very well rise above 2%.

Finally, the market isn't used to seeing elevated inflation for any prolonged period of time. The Fed hasn't embraced the idea of a higher rate ever since Paul Volcker became chairman in 1979 and announced new measures aimed at reining in inflation.

At this point, the market has seen nearly 30 years of annual inflation holding steady below 3%. Investors may still be bullish now... but it looks like some markets are starting to realize the shift.

For example, financial-services giant Bank of America (BAC) noted that over the past three months, a record $1 billion has flowed into inflationary-protected U.S. Treasury funds.

As such, investors need to be patient and carefully consider the effect inflation could have on their portfolios. The last thing an investor wants to do now is get caught by surprise if inflation rises further. This is a trend we'll be keeping a close eye on here at Altimetry Daily Authority... stay tuned.