This Medical-Devices Maker Is Providing an Alternative to Opioids... And That Means Big Returns

Thanks to OxyContin, one family has continually been in the news over the past few years…

The Sacklers are the controlling family of Purdue Pharma, the maker of the well-known, addictive drug OxyContin. This is the drug that has been at the center of the prescription painkiller opioid crisis plaguing the U.S. for more than a decade. And last year, more than 130 people were dying daily due to opioid overdoses.

It’s been bad press for the Sacklers… but long before the family took center stage as the villains of the crisis, they saw the writing on the wall. As Bloomberg recently reported, the Sacklers used shell companies to move Purdue’s money away from the risk of the U.S. legal system.

From 2008 to 2017, $10.8 billion flowed out of Purdue through hundreds of transactions. The money was sent to various trusts in Luxembourg, the British Virgin Islands, and Delaware. Nearly $570 million was sent to the Sacklers’ global pharmaceutical arm, which may sell for upwards of $5 billion.

The opioid crisis hasn’t just tragically ruined millions of lives… it has also highlighted the ways a deceptive management team and controlling family can play accounting games. The Sackler family has proposed a settlement worth billions of dollars, but much of the money will never be recovered. The funds have likely been used to fund multimillion-dollar real estate transactions around the globe, and likely more unknown cash-protecting transactions.

And in the meantime, the crisis has raged on.

Many alternatives exist, ranging from over-the-counter offerings to alternative drugs. These include taking products like Tylenol, Aspirin, or steroids. These drugs are much less addictive than opioids, but also generally produce less desirable results for pain relief.

Other more time-consuming methods include going through physical therapy. Even further, more invasive options include surgery, injections, or nerve blocks to try and dull the pain.

However, one company that Altimetry Daily Authority reader Fredrik asked us to look at is pursuing another path…

Zynex (ZYXI) uses electrotherapy for pain management. Its NexWave, NeuroMove, and InWave medical devices are used to treat pain in a noninvasive and non-addictive fashion – sending controlled electric shocks to targeted parts of the body. The company is small… It has a market cap of just around $550 million, and its 2020 revenues are forecast between $80 million and $85 million.

While electrotherapy hasn’t yet gained widespread usage like Tylenol has, the treatment has seen increased acceptance as a viable method – its market has grown to more than $1 billion worldwide. Zynex appeared to be taking advantage of these trends, as its returns inflected higher in 2017. This was when the opioid crisis came into more widespread focus and people began to seek alternatives.

Zynex’s as-reported return on assets (“ROA”) had jumped from 10% in 2016 to more than 80% in 2017. However, the jump appeared to be short-lived, as people continued to use traditional methods for pain relief. The company’s as-reported ROA collapsed all the way to 29% in 2019 – portraying Zynex as a firm with crumbling returns. 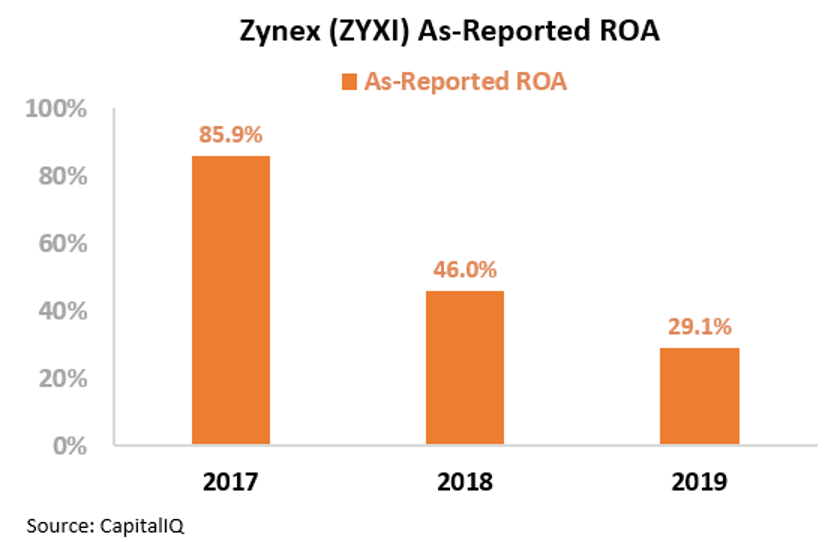 However, this picture of Zynex’s performance doesn’t accurately capture the extent of the company’s success. This is due to distortions in as-reported accounting, including the GAAP treatment of excess cash. This means the market has missed how well Zynex has been able to capitalize on shifting preferences in the wake of the opioid crisis.

Zynex’s Uniform ROA didn’t fall off a cliff after 2017, but actually saw growth. Last year, the company’s real returns were 79%, not the 29% as-reported figure. 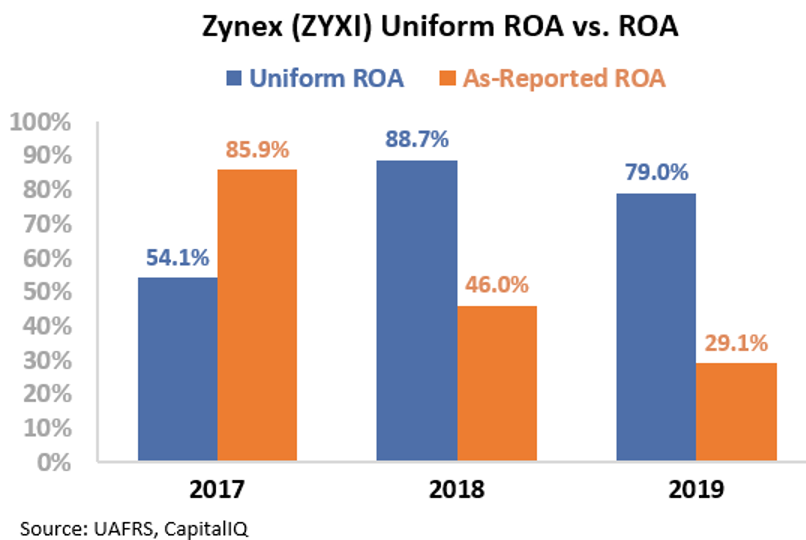 Zynex has been able to successfully create an alternative in the pain management space.

However, understanding how strong its historical returns have been doesn’t explain if the stock is undervalued or overvalued.

To see if Zynex can continue to create value for shareholders, we can use the Embedded Expectations Framework to take a look at market valuations.

The chart below explains the company’s historical corporate performance levels, in terms of ROA (dark blue bars) versus what sell-side analysts think the company is going to do in the next two years (light blue bars) and what the market is pricing in at current valuations (white bars). As you can see, while analysts forecast a slight pullback in Zynex’s returns, the market expects returns to grow well beyond current levels and jump to 108% by 2024.

While Zynex has been able to grow its ROA in the wake of the opioid crisis, expecting such pronounced growth may be unsustainable. Unless the company can fundamentally and continually grow the market size for electrotherapy, it may struggle to match these valuations.

Without Uniform Accounting, investors would miss the high profitability of this innovative electrotherapy provider. They might think Zynex is a firm with declining profitability after an initial jump in 2017… when in reality, they’re really looking at a firm that has maintained its strong returns.

However, barring industrywide shifts in the status quo for pain treatment, Zynex’s sky-high market expectations may make it difficult for the company to justify further stock growth.