As Cyberattacks Become a Part of Online Life, One Company Offers a Two-Pronged Defense

As the world continues to move online, the threat of cyberattacks also becomes more prevalent…

The issue affects almost every facet of our society… and it’s hard to go a year without hearing about a high-profile incident. Just in recent years, attacks on Adobe (ADBE), eBay (EBAY), and Equifax (EFX) released information on more than 100 million clients each.

Ransomware and cyberattacks also affect municipalities. Hackers hold small towns’ data hostage and refuse to return information unless a ransom is paid. These attacks can cost municipalities millions of dollars… and they’re on the rise. According to a report by online-security trainer KnowBe4, attacks on local governments rose 59% between 2018 and 2019.

These attacks have become so prevalent that municipal bond issuances usually mention them in their official statement as a risk. Investors must now weigh the perceived cyberattack risk in municipal bonds – something that was never considered by folks only a decade ago.

And the risk isn’t just at the local level. The federal government also faces the constant threat of cyberattacks. Just last month, Russia carried out one of the largest cyberattacks on the U.S. government in history.

In mid-December, cybersecurity firm FireEye (FEYE) confirmed that Russia-backed groups hacked into its systems. It immediately reported the issue and discovered that it was widespread.

The hackers were able to gain access to FireEye, other companies, and the government through software firm SolarWinds (SWI). They targeted SolarWinds because it does business with most Fortune 500 companies and many branches of government.

As SolarWinds was updating its system, the hackers gained access. In doing so, they were able to collect data on as many as 18,000 customers. They also gained access to the Department of Homeland Security, as well as the Treasury and Commerce departments.

Now, multiple national governments and firms like FireEye are trying to pick up the pieces and limit the damage.

Given the immense cost cyberattacks can pose, companies and governments often have multiple layers of security…

These include both hardware and software solutions. The two-pronged approach can reduce the risk of an attack crippling a specific entity, as well as reduce the damage if an attack does occur.

Fortinet (FTNT) is one company that offers bundled hardware and software cybersecurity solutions. The firm has several different offerings, including antivirus software, e-mail encryption, and its FortiGate suite of products.

The FortiGate product family has a wide array of capabilities and allows clients to protect their respective companies from external threats. These offerings include intrusion protection and wide areas network (“WAN”) acceleration.

Fortinet works with many different clients across various business sizes and industries. It also partners with school districts, municipalities, and the federal government. Some of its larger clients include financial-services firm Edward Jones and even the NFL’s Pittsburgh Steelers.

And yet, looking at its as-reported profitability, Fortinet has largely been a below-cost-of-capital firm. Since 2014, the company’s as-reported return on assets (“ROA”) has only ranged between 1% and 6%.

However, this profitability depiction isn’t accurate. Due to its treatment of income taxes and other current liabilities – among other distortions – GAAP is misrepresenting the Fortinet’s returns.

Uniform Accounting shows that Fortinet’s ROA is above cost-of-capital levels and is improving. This is due to industry tailwinds and strong product performance.

As the threat of cyberattacks increases, most companies in the cybersecurity industry have benefited. Additionally, Fortinet’s products have fantastic ratings and have been shown to have a strong track record.

Thanks to these tailwinds, Fortinet is investing in its business. In recent years, the company has had robust asset growth – since 2014, the company’s Uniform Asset growth has been positive every year and has regularly been above 20%. 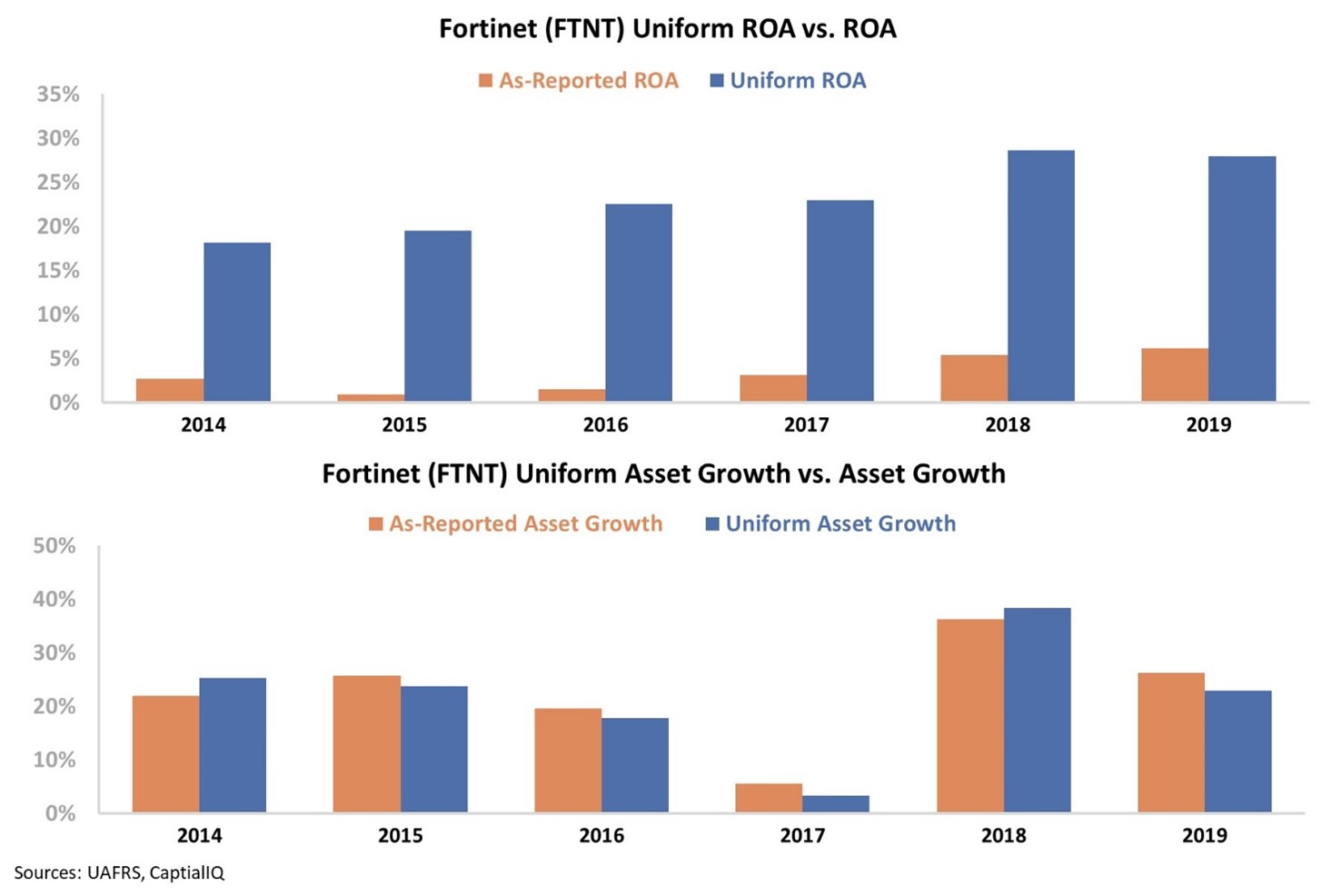 Thanks to the power of Uniform Accounting, we can see how successful Fortinet is. Since 2014, the company’s performance has improved greatly. Additionally, Fortinet isn’t only improving returns… It has also been expanding its asset base.

As the threat of cyberattacks continues to loom over companies and governments, the industry will see increased demand for years to come. Given Fortinet’s product offerings and position in a growing industry, it may be a stock to keep an eye on as the market comes to its senses regarding the real story behind Fortinet’s financials.

Here's the Company Primed to Prosper With New Year's Resolutions

Despite Big Demand, Rating Agencies Are Treating This Homebuilding Supplier Like It's 2008

Management's Outlook Gives Us a Secret View Into the Market's Direction