Don't Throw the Baby out With the Bathwater

Occasionally, a market event happens that's so big it's impossible to ignore. And not just impossible for investors to ignore, but everybody.

The housing bubble and Great Recession are obvious ones, but several others in recent memory come to mind.

The dot-com bubble of the late 1990s to early 2000s shook the public's perception of tech and Internet firms.

The pharmaceutical industry came under pressure during each of the last few election cycles, raising questions about the future of drug pricing and health care costs.

One of the most recent instances was the oil glut of the mid-2010s, when oil prices fell from more than $100 per barrel to just $40 per barrel. This was great for car owners, but not so great for investors...

When the market news is so grim that everybody knows about it, it can leave a lasting impression on the industry. These events change the consensus view on big parts of the economy for years to come.

When oil prices were falling, oil companies struggled. Many players in the industry couldn't turn a profit at such low oil prices.

Most oil operations had to shut down, at least temporarily. A few companies went bankrupt, but the vast majority weathered the storm.

Since then, the public has had cold feet toward the oil industry. Despite oil prices stabilizing in the $50 range over the past few years, most investors have kept their backs turned. They are missing out on an opportunity to invest in the rebound.

While there are many companies in the space, we find Viper Energy Partners (VNOM) particularly interesting...

Viper isn't your typical oil company. It doesn't pump oil out of the ground... It doesn't own and operate rigs... It doesn't build pipelines... And it isn't a refining and distribution operation. Viper makes money from mineral interests.

Mineral interests give the owner royalty fees for any resources extracted from a piece of land. But Viper never has to spend a dollar to extract any resources. If a business – likely Viper's former parent company Diamondback Energy (FANG) – extracts oil or natural gas from the land it owns, Viper gets paid a percentage of the revenue.

Viper owns mineral interests on nearly 15,000 acres of land in two of the richest landmasses in the country: the Permian Basin and Eagle Ford Shale.

These two oil fields are the highest-volume producers in the country, so this is great news for a company which gets paid based on the amount of oil produced on its land.

Viper has no variable cost, since it doesn't actually drill for oil. So when oil prices and production rise, the company makes more money.

During an oil glut, Viper's profitability will get punished significantly – as both production and prices fall – but it will rebound strongly when those trends reverse.

When tracking Viper's as-reported financial data, return on assets ("ROA") over the last five years is uninspiring. Many oil companies have bounced back, but Viper has not seen as robust of a recovery.

From 2014 to 2016, the company's ROA was in the 3% to 5% range, which is below long-term corporate averages. Since then, as more oil production has come online, Viper's ROA has improved modestly to 9% to 10% levels.

This isn't bad, but the company is not blowing away the rest of the industry.

But once we apply our Uniform Accounting metrics, the distortions from as-reported accounting statements are removed...

The chart below explains the company's historical corporate performance levels in terms of ROA and asset growth (dark blue bars) versus what sell-side analysts think the company is going to do in the next two years (light blue bars) and what the market is pricing in at current valuations (white bars). Take a look... 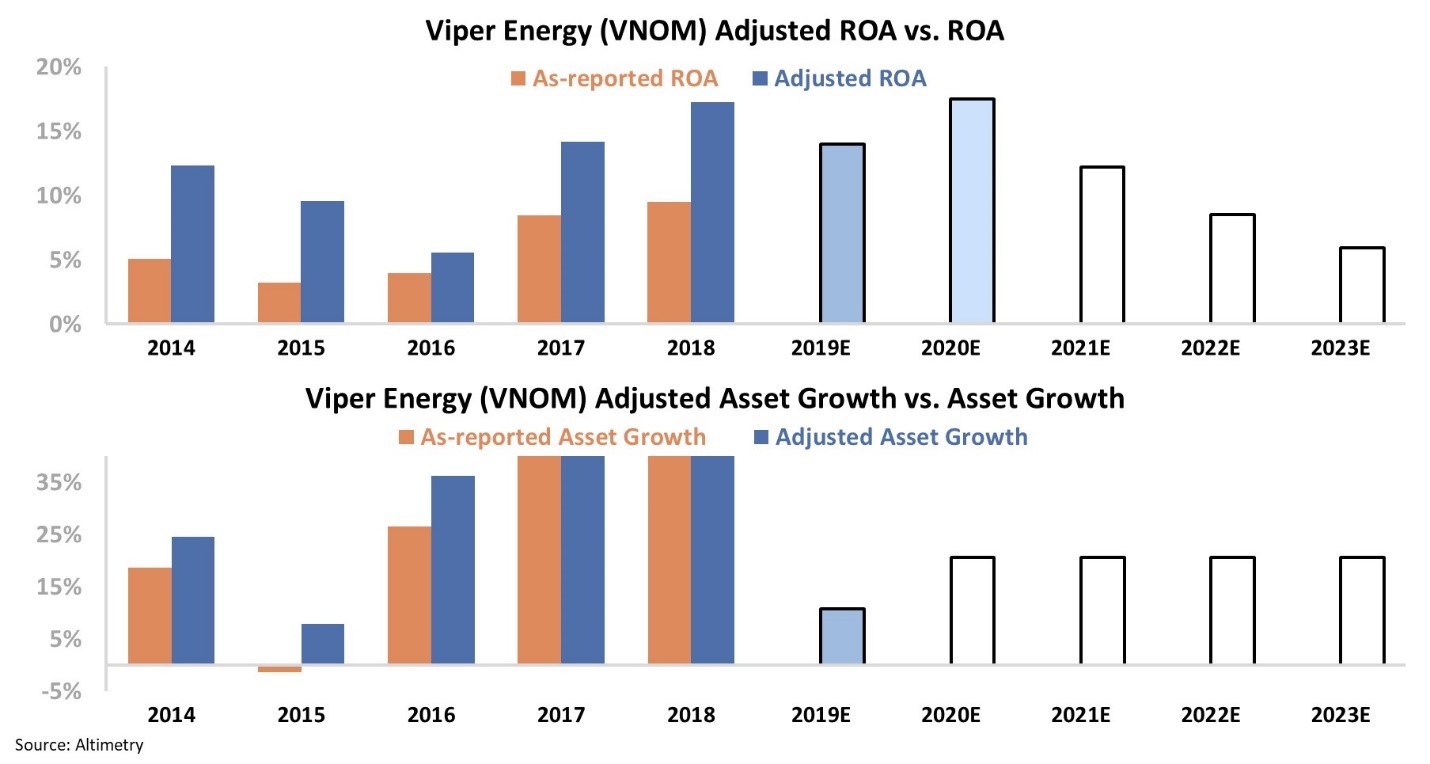 When looking at the Viper's adjusted ROA, we can see the benefits of owning mineral interests. Throughout the entire oil glut, the company's ROA remained above the long-term corporate average levels of 6%, not the distorted levels below 5% that GAAP shows.

As production has rebounded in the last two years, the Viper has begun minting money, most recently reaching a 17% ROA last year.

After looking at the Uniform numbers, the company's stock rise since late 2017 starts to make more sense...

The corporate-average P/E ratio is around 20, so companies with a P/E ratio above 20 tend to look "expensive" and companies below this level look cheap.

If you looked at Viper with as-reported metrics, you'd think it was generating average returns... and about twice as expensive as the average company. You'd be looking at a business with mediocre returns and a premium valuation.

In reality, Viper's P/E ratio is just 13.2 – cheap for a company with such high (and improving) returns... 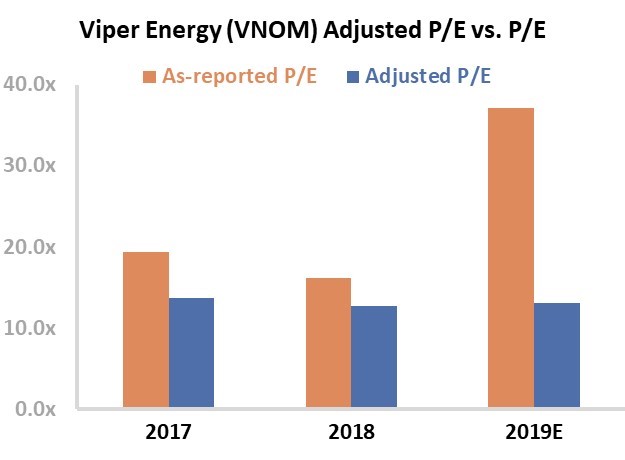 Great investors don't turn their backs on beaten-down industries. They wait for the right time to step in before the market comes to its senses. With Uniform Accounting, it's possible to see these signals before it's too late and the opportunity passes.