Growth Investing Through the Indexes

Last month, I kicked off the CFA Institute's Equity Research and Valuation Conference...

I opened the talk by citing two of legendary investor Benjamin Graham's most seminal works: The Intelligent Investor and Security Analysis. Graham is known as the "Father of Value Investing," and investors often regard these two works as the greatest books on the subject.

The term "earning power," is mentioned a whopping 150-plus times across these two tomes. The importance of a company's "power to earn" is paramount to its valuation.

Throughout our daily emails, publications, and our online Altimeter database, we refer to Uniform return on assets ("ROA") often. Word for word, we probably mention "ROA" as frequently as Graham mentions "earning power." That's not by chance... It's simply staying true to one of the foundations of great value investing.

Financial statements have become unbelievably more complicated than in the mid-20th century. However, the concept of measuring earnings and earnings rates remains as important as ever.

One of our students caused us to think deeper about the impact of passive investing...

One of the courses we teach regularly at business schools is called "Strategic Valuation." It always features a lecture titled "How to Beat the Market."

It's always interesting to see how students react to this lecture. Some seem to expect a list of five companies that are "sure" to beat the market (as if it's that easy!), while others take ample notes on the investing advice from the beginning.

"How to Beat the Market" is a lesson on the mindset of the greatest investors ever. It's a study on how titans like Warren Buffett, Seth Klarman, and David Einhorn use information to their advantage.

In November, we were just wrapping up this lecture section at a class in Boston when a student asked a very thoughtful question that inspired this article.

Buffett often recommends investing in index funds. With the massive growth of passive investing and index investing, is it more difficult to beat the market?

He was right – passive investing has grown massively since 2000, from nearly 0% of the market to a number rapidly approaching 50% of all assets under management ("AUM") in U.S. equities.

As index funds continue growing, many researchers and academics have pondered a similar question – does passive investing impact market efficiency? If half of the market is simply investing in the overall market, won't it become harder to outperform?

This is a worthwhile intellectual debate – but not what today's issue is about. What caught my eye in particular was the staggering growth in index investing and how that might lead to an investing opportunity.

You see, all of the big funds providing passive investments and exchange-traded funds ("ETFs") don't come up with the indexes themselves. There are companies whose business models revolve around creating the indexes that now control nearly half of all investment dollars.

There are a few big index providers, but the top two dominate the market. You're probably familiar with S&P Global (SPGI) – the creator of the S&P 500, the S&P 1000, and many of the most well-known indexes in the world.

The other major player in the index-provider space is MSCI (MSCI). While the S&P 500 tracks the 500 largest U.S. companies, some of MSCI's best-known indexes have a global focus – including MSCI World and MSCI Europe, Australasia, and Far East ("EAFE").

Much like the wisdom of "selling pickaxes during the Gold Rush," it may make more sense to invest in the index providers than in the indexes themselves.

During this massive surge in passive investing, MSCI has seen an incredible stock performance. In just over the past two years, the company's shares have more than doubled...

After this huge run higher, it may seem like the market has already priced in the incredible growth of index investing.

When looking at MSCI's price-to-earnings ("P/E") ratio, the company looks expensive, with a ratio of 38 – nearly twice market averages.

While a high valuation doesn't always mean "don't buy," it does mean we need to look at two things: profitability and growth. For a company to justify expensive valuations, it needs to see a lot of growth and have strong returns.

After making several adjustments to MSCI's financial statements – accounting for mistreatment of items like goodwill, research and development (R&D), and stock option expense – we can see the company's true profitability and potential...

The chart below highlights MSCI's historical corporate performance levels in terms of ROA and asset growth (dark blue bars) versus what sell-side analysts think the company is going to do this full year and next year (light blue bars) and what the market is pricing in at current valuations (white bars). 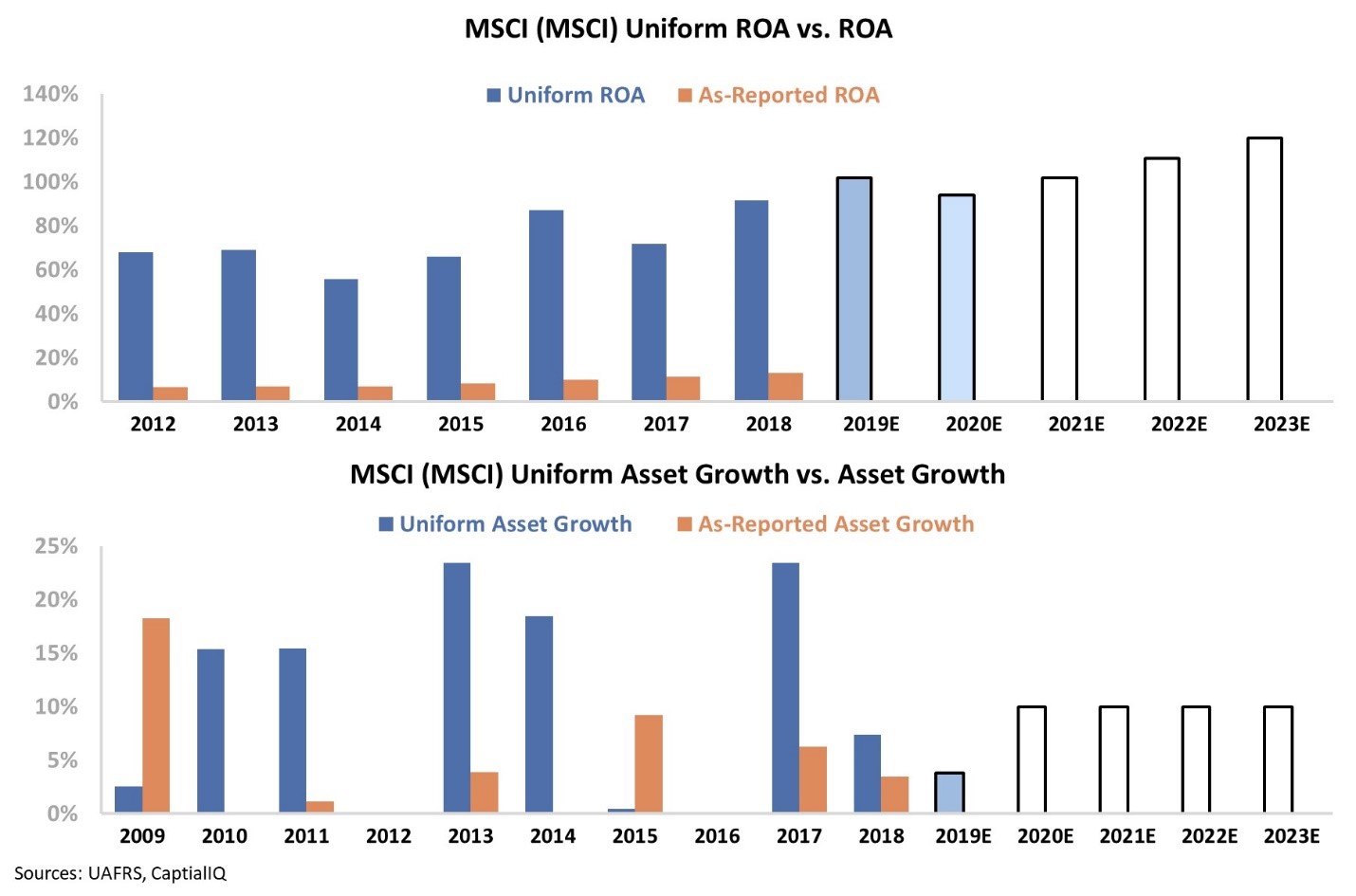 While MSCI's as-reported ROA has only recently reached market-average levels, its Uniform ROA is nearly 10 times as profitable as the average U.S. corporation.

Not only is the company far more profitable than as-reported metrics suggest, but it has seen significant ROA expansion from 55% in 2014 to 92% in 2018 – nearly doubling over the past five years as passive investing has taken off.

And MSCI has seen positive growth in eight of the past 10 years and five years of 15%-plus growth.

Once we apply Uniform Accounting, we can see that while still high, valuations are not as expensive as they may seem...

MSCI trades at 32 times Uniform earnings. Though still above market averages, it's below the as-reported ratio of 38... and current ROA expansion and asset growth justify these valuations.

If MSCI can maintain recent ROA expansion rates, it might even have room to reach higher valuations.

Under as-reported accounting, this looks like an average company at an above-average price... But we can see the true power of passive investing once we've made the correct Uniform adjustments.