The nature of the job hunt is changing...

Unlike in the days of one-page resumes and face-to-face interviews, for many folks on the job hunt in 2021, there may be a faster avenue toward getting a job.

As the New York Times recently explained, that new method may be via TikTok – the Chinese-owned video-sharing app that has members of Gen Z glued to their screens.

LinkedIn networking and a well-timed, well-placed résumé used to be all that was needed to get a foot in the door. But today, more young people are now using TikTok as a networking tool.

This allows them to leverage TikTok's massive platform – which boasts more than 680 million monthly actively users – to advertise their skills and find new jobs.

In fact, there's even a website called TikTokresumes.com where many companies – including Chipotle Mexican Grill (CMG), Target (TGT), and Sweetgreen, to name a few – review video "pitches" of applicants explaining why they should be hired.

In a strange labor market where it's both incredibly hard for employers to find labor and the unemployment rate remains well above its pre-pandemic level, this is an interesting look into how the world of employment is changing.

Innovations in how businesses hire workers could help drive more Americans back into the labor force...

Perhaps this dislocation between where people are posting their skills and where employers traditionally search for new hires is one of the reasons for the strange conditions we currently see in the labor market.

While we're in the middle of an impressive economic recovery, the country continues to struggle with a high unemployment rate... even while employers are crying out for qualified employees. The unemployment rate is implicitly linked to another, less talked about measure.

The labor force participation rate – the percentage of the working-age population that's working or trying to work – is down to levels we haven't seen since the early 1970s, when women were still in the early stages of making progress toward moving into the workforce.

This marked a time when an increasing number of Americans began entering the labor market – driving greater output for the economy as a whole and contributing to sharp declines in unemployment.

Yet, in the aftermath of the Great Recession– when the unemployment rate in the U.S. reached nearly 10% – a weak economic recovery and an aging workforce contributed to a steady decline in labor force participation from more than 65% in 2008 to around 63% by the beginning of 2020.

This slow exodus stands in stark contrast to the pandemic-driven recession, during which the unemployment rate briefly spiked to around 15% – levels last seen during the Great Depression – along with a much steeper decline in labor force participation.

By now, the unemployment rate has made an impressive recovery from the depths of lockdowns – dropping from around 15% to less than 6%. However, it remains elevated compared to the 3% levels seen pre-pandemic, just as the labor force participation rate continues to remain suppressed. 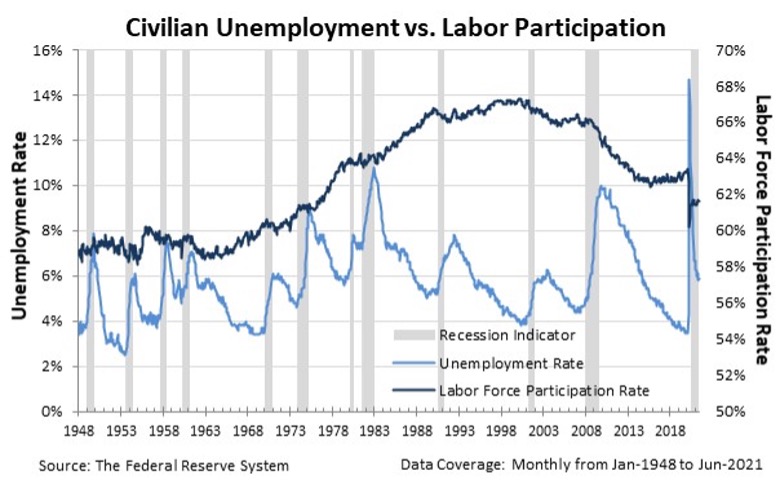 While some folks might be concerned about these numbers, the reality is that this is promising for future growth...

It means that even though the statistics show economic activity having impressively recovered – with U.S. gross domestic product ("GDP") hitting a new high in the first quarter of 2021 – there's ample room for more people to re-enter the workforce and keep that growth accelerating.

That's because many of the factors specific to the pandemic that are holding people back from working are largely temporary – from child care-related issues and concerns over catching the coronavirus, to generous extended unemployment benefits.

With school districts across the U.S. preparing to fully reopen and many extended government benefits set to expire in the fall, along with wide availability of vaccines throughout the country, opportunities for people to return to work are increasing by the day... thus providing a tailwind for economic growth to continue recovering.