Not only do indexes enable investors to easily quantify market performance, but they also allow for passive investing through exchange-traded funds (“ETFs”) that track an index’s performance. Think of the S&P 500 Index – it serves as a benchmark for the overall market.

However, stock indexes can also be useful for active investors. Some of these folks try to identify and buy companies the S&P 500 may add in the future. These investors anticipate a rally in those names after joining the index.

As an index adds companies, passive investors in essence buy the stock through ETFs and mutual funds – as the funds have to buy the stock to continue to track the index. Active investors thus bet on these stocks rising… as these names would now be included in a big wave of funds.

Between 1997 and 2007, active investors were able to profit from this strategy – with stocks realizing a large price bump upon the news of inclusion. However, between 2008 and 2017, this strategy appeared to run out of steam.

Today, stocks see a small upward trend when the index announces their inclusion. However, this bump is short-lived… After only a matter of weeks, the absolute return turns negative.

As The Economist discussed last month, one theory as to why a sustained rise has disappeared is that the emergence of ETFs and mutual funds has led managers and boards to be less concerned that they’ll be under more scrutiny upon S&P 500 inclusion. Since passive investors won’t hold managers’ feet to the fire, executives need to worry less about disappointing investors.

Another reason may be the “index ownership bump” now occurs much earlier in a company’s life than in the past. Passive holders exist in multiple types of stock indexes, including the popular small-cap Russell 2000. This means that by the time a stock reaches the S&P 500, a large portion of passive investment may have already taken place. At that point, S&P 500 inclusion is just a re-shuffling between funds at the same passive fund groups.

Additionally, when a company is added to the S&P 500, it may be the “end of the road.” The only other index that’s more exclusive is the more than 100-year-old blue-chip Dow Jones Industrial Average. With only 30 stocks in the index, it’s difficult for any company to gain a spot.

As such, reaching the S&P 500 often implies that a company has scaled as far as it’s able to do. Therefore, it may be easy for the newly added firm to actually underperform the index after an initial bump… as investors recognize the business has started to mature.

Although a company’s addition may be a positive milestone for companies and investors alike, it appears the addition to the S&P 500 may now be more of a curse than a blessing.

However, many investors still pay a lot of attention to which stocks make it into the S&P 500…

Companies need to meet a handful of qualifications in order to join the index. These include being listed on the Nasdaq or New York Stock Exchange, having a market cap of more than $8.2 billion, and having four consecutive quarters of positive earnings. Companies who qualify for the index are then selected through a committee.

Right now, the committee is deliberating adding electric-car maker Tesla (TLSA) to the index. TSLA shares have soared in recent months, and it’s now one of the largest public companies in the country. Tesla has recently qualified with its fourth consecutive quarter of positive net income – the one metric that had been holding it out.

However, the committee has yet to include the stock in the S&P 500, partially due to Tesla’s size – it would cause a large rebalancing of the index. Tesla investors are still hoping the company gets added, as they believe inclusion will help the share price.

However, as we said earlier, history shows an inclusion to the S&P 500 may not actually help push a name higher as many bulls hope. Investors don’t need to look far in the past to find a stock that didn’t see a benefit from its inclusion to the index…

Even before Steris joined the S&P 500, the equipment company’s share price was stuck moving sideways. Last September, STE shares traded for $152. By the time the company was added to the S&P 500, shares were $0.50 lower. And since Steris’ inclusion, the stock has continued to stagnate… Today, STE shares are only trading for slightly less than $160.

However, the stock has consistently outperformed the S&P 500 over the prior 10 years, with significant stock appreciation driving the initial inclusion in 2019. Over the past decade, the S&P 500 returned 223%… while Steris returned 441% during the same period. 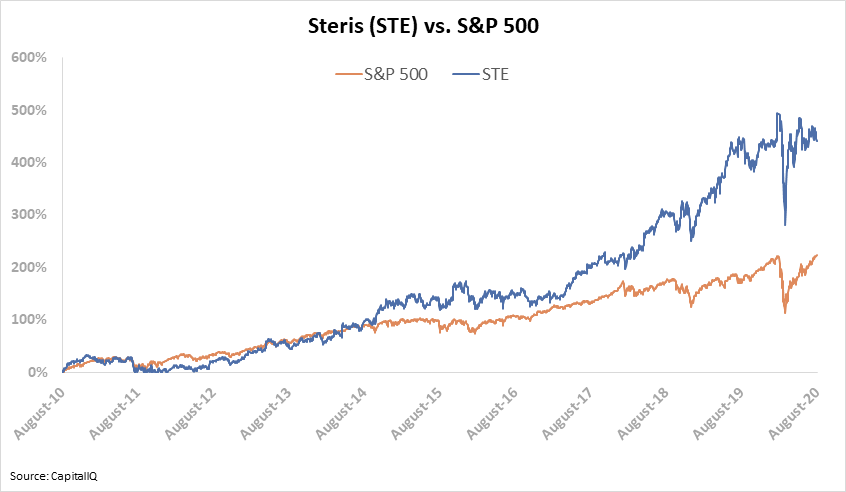 This consistent appreciation might make little sense to investors, as Steris’ as-reported return on assets (“ROA”) has been mostly declining since 2012. From 2012 to 2020, the company’s GAAP returns have fallen from 10% to 7% – hardly justifying such impressive performance.

However, Steris has realized sizable stock appreciation in the face of low returns due to the fact that GAAP accounting has clouded investors’ understanding of the company. Distortions in goodwill and intangibles, among other adjustments, have greatly altered Steris’ asset base. These distortions are artificially lowering the company’s Uniform ROA.

In reality, Steris has justified its impressive rise in the years before it joined the S&P 500… Its Uniform ROA has steadily improved from 6% in 2011 to 18% this year.

That said, to understand whether Steris can break out of its rut since joining the S&P 500, simply seeing that its returns are strong isn’t enough. We need to drill down into the market’s expectations.

The Embedded Expectations Framework allows us to quickly understand the market’s assumptions for profitability at the current price… and perhaps understand why Steris has been trading sideways.

The chart below shows the company’s historical corporate performance levels, in terms of ROA (dark blue bars) versus what sell-side analysts think the company is going to do in the next two years (light blue bars), and what the market is pricing in at current valuations (white bars).

Steris has seen consistent Uniform ROA growth over the past decade, and analysts see the trend continuing in the years ahead. The market is also pricing in continued growth. Therefore, Steris needs to continue expanding to simply justify its share price. Clearly, investors’ significant bullishness was what got the company added to the S&P 500 in the first place.

However, past performance is no guarantee of future results. This is because a company is priced not by what it has done in the past, but by investors’ expectations for its future. Without the power of Uniform Accounting, investors would be in the dark as to why Steris has seen great success in the past… and also why investors’ high expectations may prevent it from continuing its multiyear rally.

A Big Manufacturing Shift Could Be Looming... Here's What It Means for One Construction Firm

This Medical-Devices Maker Is Providing an Alternative to Opioids... And That Means Big Returns

The Market Is Hinting at an Important Signal... It May Be Time to Listen

Thanks to 'Digital Nomads,' One Cruise Line Operator Is Poised for Big Upside as the Pandemic Recedes

This Former 'Unicorn' Actually Knows How to Make Money