Here's Why You Should Avoid This Popular Pot Stock

Over the past few years, the investing world has been abuzz about the market potential from the potential legalization of cannabis across the U.S...

Speculators and investors are looking to model the potential market size for legal cannabis, with analysts forecasting demand and potential revenues against the alcohol market or foreign cannabis markets. It's the "gold rush" of the 21st century and an unmapped industry for many investors.

There's a huge opportunity for wealth creation as the industry goes from a black market to a legal one. From the jobs created growing and selling cannabis to tax revenue, there are many economic winners. And the growing market is creating big opportunities for investors.

Furthermore, as Brookings highlighted in a recent thought piece, there's another potentially more powerful effect of the legalization of cannabis – specifically, how it affects the justice system. In many states, such as New York, as cannabis is legalized, folks jailed for recreational cannabis should see the charges expunged from their records.

Such actions lighten the criminal justice system's load and help level the playing field for job applicants in the labor market. This also reduces the risk of people ending up in jail for petty crimes, which could lead to worse ones. For folks who are on the fence about the economic benefits, this might be a further catalyst to support legalization.

These changes will not only make people's lives better but have a measurable positive effect on society and our economy.

It's a complex patchwork of cannabis legalization...

With cannabis reform in its early phases, investors still have a significant opportunity to buy into the space today.

With the patchwork of legality in the U.S., domestic growers have many challenging roadblocks. They have to pay taxes on revenue, not on profits, which depresses earnings potential. And domestic growers can't list their shares on major U.S. exchanges, which limits liquidity.

This is partly why large Canadian growers looking to supply U.S. cannabis consumers hold an advantage. Canopy Growth (CGC) is a popular stock for investors looking to speculate on legalization and deregulation.

But for all the roadblocks, the local U.S. growers – also known as "multistate operators" ("MSOs") – hold a few advantages to the Canadian growers, such as established local stores and supply chains.

Canopy may face a tough road to breaking into the U.S. market, as state and regional regulations also limit the potential for Canadian imports. Furthermore, it's likely that once cannabis is legal everywhere, the U.S. MSOs will be able to supply their entire market handily.

So, to better understand where Canopy stands today and if it's a relevant name to play this big theme, we need to crunch the numbers...

To look beyond the financial 'noise,' let's see what The Altimeter shows...

Using the power of Uniform Accounting – which removes the distortions in as-reported financial metrics – The Altimeter shows users easily digestible grades to rank stocks based on their real financials.

After we clean up the numbers, we can see that Canopy has struggled historically to turn a profit, with analysts forecasting 2021 to be no different. With a negative 17% return on assets ("ROA"), Canopy gets an "F" for Earning Power.

On the other hand, despite these abysmal numbers, earnings have at least mostly been heading in the right direction... which means Canopy earns a "C" for Earning Power Trend.

Putting it all together, Canopy earns an overall "C" for Performance. Despite recent improvements, anyone betting on Canopy's setup to make money is missing out on reality. 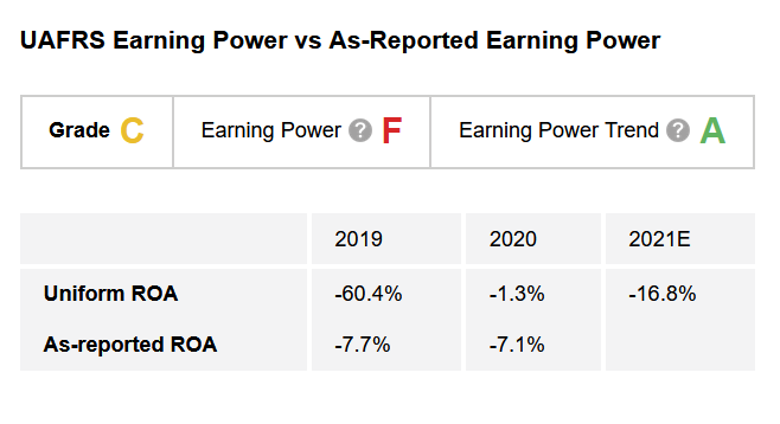 Canopy might not be poised to win... But other names in the sector are primed for big upside.

In Altimetry's High Alpha, we recently found two companies poised to be the winners in this new and massively growing market opportunity... because we've found the people who are focusing on the winning strategy of owning the distribution and the customers first.

This approach will turn them into big winners and allow them to grow faster than the market realizes – creating big upside for investors. To learn more about High Alpha – and find out how to gain instant access to these recommendations – click here.