How to Avoid the 'Winner's Curse'

It's a simple idea. When you're the highest bidder, you almost always overpay. Winning means you had the most optimistic view of an asset's value.

That is, unless you know something that everyone else is missing.

It shows up in online auctions on eBay. It happens in bidding wars for paintings and sculptures. And it's even common with massive merger and acquisition ("M&A") deals.

We've seen thousands of these M&A deals end in disaster. And our Uniform Accounting adjustments show how bad accounting can make the deals even worse.

And most Wall Street analysts expect billions of dollars in value destruction in the second-biggest M&A deal of the year...

These products provide a strong and stable franchise, with high margins and limited exposure to normal drug business risks like patents and reimbursement. AbbVie's legacy business is heavily exposed to those issues, especially the dreaded two words for pharma companies, the "patent cliff."

A patent cliff is when a drug comes off patent and generic pharmaceutical companies can offer alternatives. In the biopharma space, they are called biosimilars. Those are a bit tougher to create, but they serve the same purpose.

When a drug comes off patent, generics enter the market. Prices plunge and margins collapse.

AbbVie's biggest breadwinner, arthritis drug Humira, is starting to come under attack globally. The clock is ticking until 2023, when patents in the U.S. start to expire, opening competition. AbbVie looked desperate to diversify its business from Humira in particular, and the branded drug business overall.

An investor could easily look at this acquisition and see desperation and a management team lighting money on fire.

After all, AbbVie was desperate for the business, and no one offered to pay more for Allergan. The market appears to be telling us they've fallen for the winner's curse. On the day the deal was announced, AbbVie shares dropped from $78 to $66, and they're still around those levels.

The market hates the deal. Allergan hasn't generated positive earnings, excluding special items, since 2012. The company hasn't had a double-digit return on assets ("ROA") since the 1990s.

How can a company with negative net income be accretive at any valuation, let alone at a 20% premium to valuation pre-announcement?

However, after some digging to figure out the real numbers, we can see what the market has overlooked.

When we apply our Uniform Accounting metrics, the distortions from as-reported accounting statements are removed, including issues around research and development ("R&D") expensing, accounting for special items, and acquisition distortions. Using Uniform Accounting, we can immediately see that Allergan is actually a business with ROA that is over six times cost-of-capital levels. 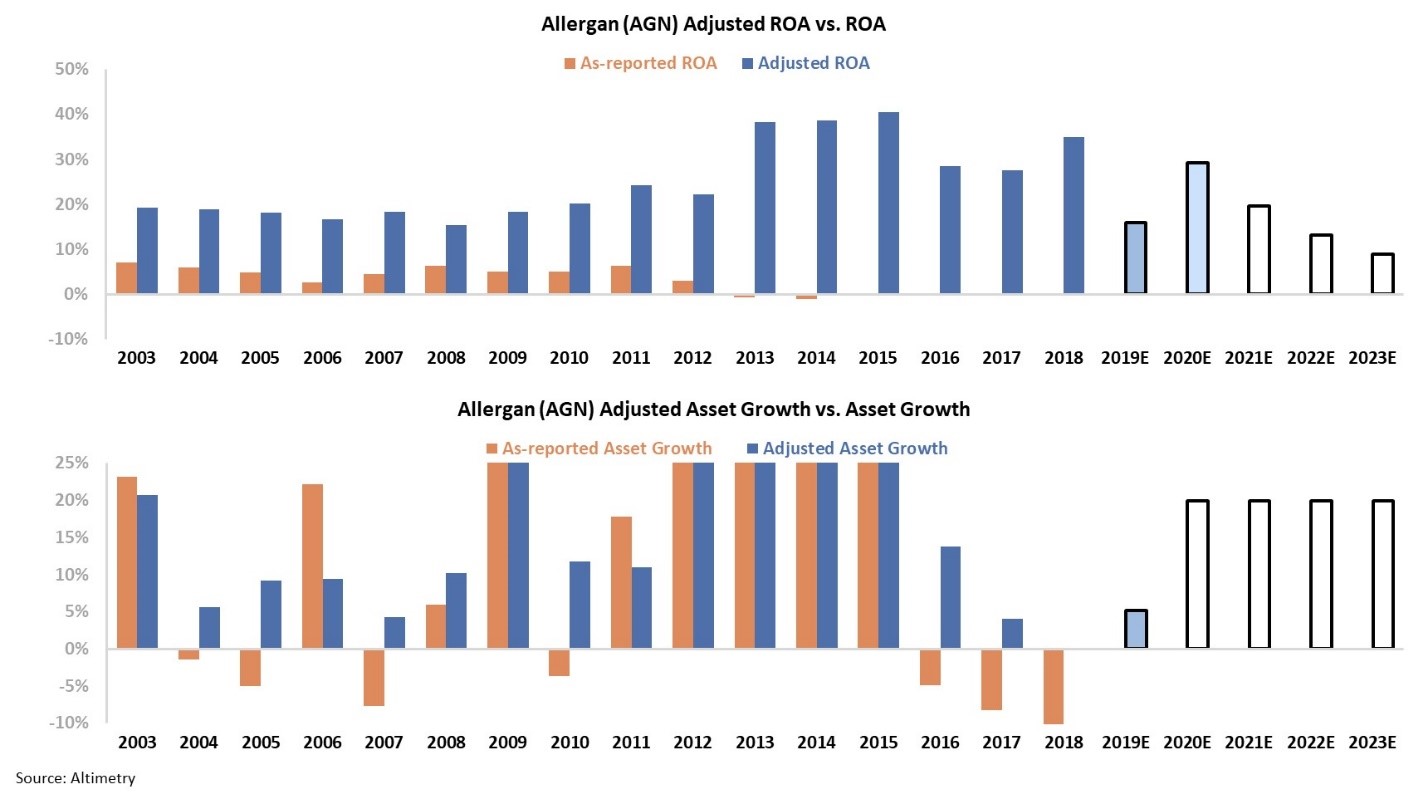 The two panels above explain Allergan's historical corporate performance levels in terms of ROA and asset growth (dark blue bars) versus what sell-side analysts think the company is going to do over the next two years (light blue bars) and what ABBV is pricing in at current takeover prices (white bars).

Not only has Allergan had positive ROA since 2013 (something as-reported financials fail to show), it actually has an ROA near all-time highs, at 35%. The firm has also been investing heavily, with adjusted asset growth consistently above 10% prior to 2017. And even in 2017 and 2018, growth ranged from 0% to 5%, not deeply negative levels. And it has been able to maintain its strong profitability even while investing.

That brings us back to AbbVie. Based on the recent stock drop, investors clearly think AbbVie is destroying value.

Maybe AbbVie isn't a strong enough business to effectively integrate such a massive acquisition. Maybe AbbVie has poor returns and Allergan is actually doomed to see returns compress, too. In any case, if Allergan isn't the problem, maybe AbbVie is. 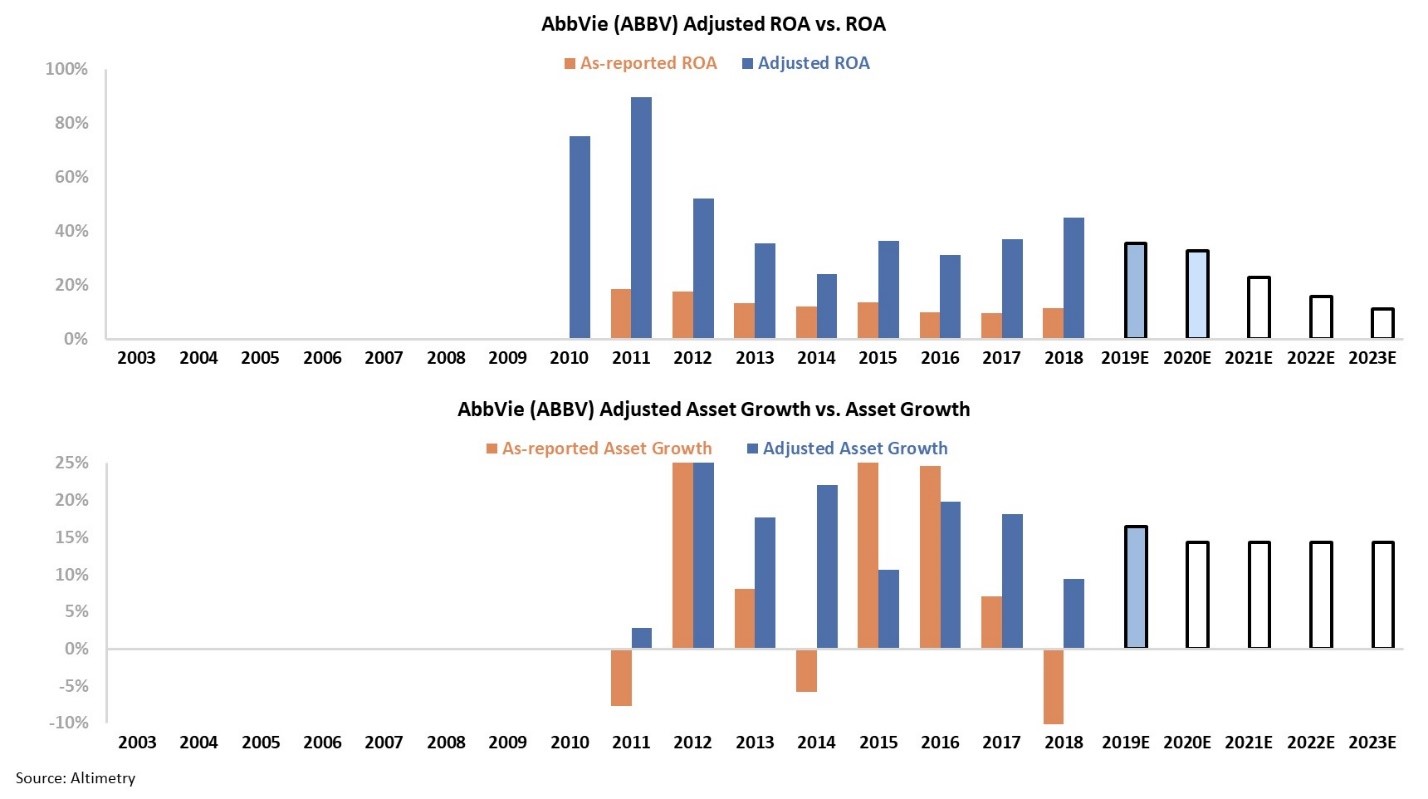 Using the same lens through which we view every company, AbbVie is actually an even better business than Allergan.

After seeing adjusted ROA bottom at 24% in 2014, ABBV has improved ROA to 45% since then. As-reported ROA has declined from 12% to 11% over that timeframe, giving an inaccurate perception of the firm's strength to investors and leading to wildly inaccurate valuations.

At current valuations, the market (white bars) is expecting AbbVie to see returns reach all-time lows and continue growing a dying business. Maybe investors are still worried about Humira or worried this acquisition is the beginning of the end. But ABBV is trading at only 8.7 times adjusted earnings!

These are levels generally reserved for awful businesses – not one of the largest, most profitable, innovative firms in health care.

This is yet another example of why you can't rely on so-called standard accounting practices...