Adoption cycles are picking up speed...

It took 68 years for 50% of U.S. households to own a landline after it was invented. It took about 11 years for half of American households to have Internet access. Smartphones took less than a decade.

And as my colleague and Altimetry founder Joel Litman discussed last week, personal use of artificial intelligence ("AI") looks like it's going to blow those figures out of the water.

The revolutionary chatbot ChatGPT reached 1 million users in five days... and within two months, the company behind it was worth $29 billion.

This trend isn't going anywhere. It's highly probable that new technologies will get adopted at increasingly blistering speeds.

Tech adoption rates are so fast, I wouldn't blame you for feeling left behind.

Today, I'll explain how best to keep up with the rapid pace of tech innovations. New technologies are changing how we live our lives... and, critically, who's going to win in the stock market.

This theory was developed by sociology professor Everett Rogers in 1962. It can help you know when to pay attention to new technology.

At the forefront are the innovators and the early adopters. These users make up roughly 16% of the population. They're comfortable playing around with new and incomplete technology.

When these users rapidly jump on board, it can feel like you're about to be left in the dust. In reality, you usually have time before the tech or product blows up.

The chasm is the split between the early market and the mainstream market. Users who adopt before the chasm are comfortable testing technology that isn't fully finished... or ready for mass adoption.

The next two groups are the early majority and late majority. They won't start adopting until the product is basically finalized. 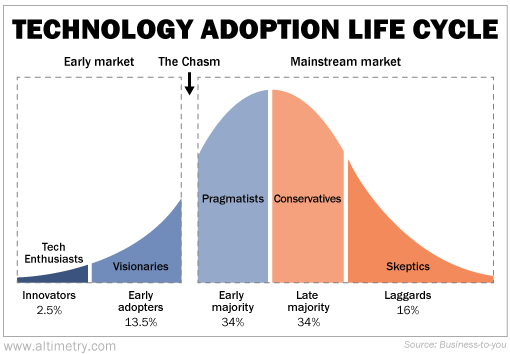 The chasm used to take years to cross... sometimes even decades. Now, it's starting to compress. That's why technology adoption seems to be getting so much faster.

With the crossing of the chasm happening faster, investors need to change tactics...

It's less about finding an investment that will win from new innovation like ChatGPT. The winners will often be private companies or those that are tough to identify in a fast-moving industry.

Instead, focus on the bigger risk – disruption.

The innovation-adoption curve works well to describe the population. It also applies to companies. Some companies are bound to lead the pack in terms of adopting new technologies. Others are bound to fall behind.

Historically, innovative companies cannot rest on their laurels. With the rise of AI chatbots like ChatGPT, Alphabet (GOOGL) CEO Sundar Pichai recently issued a "code red" alert to his team.

Alphabet claims to have top-tier AI. So it's telling that Pichai is pushing Google leadership to quickly define its AI strategy.

Google has long been the best search engine. Now, the whole concept of a search engine is under pressure. It goes to show that no company is safe.

And that makes our jobs as investors tougher.

Each innovation cycle keeps getting faster. Investors need to constantly monitor whether companies are still being innovative... or if their models are being disrupted before our eyes.

Dominant car companies had decades without being disrupted. Early Internet companies had 10 or 20 years without much competition. Companies exposed to new technology like AI won't have that much time.

Here's what you can do as an investor today...

Do your best to "cross the chasm," as management consultant Geoffrey Moore would say. As new technologies like AI start popping up, do what you can to understand them.

Figure out which companies (especially public companies) are pushing those technologies forward. Find the ones at risk of being ruined by new tech. And when the products are available for individual use, give them a try.

You may be surprised by what you come up with... and how innovations can also improve your process.

To use last week's example of ChatGPT, it has some serious advantages over Google. If you were to Google "How does ChatGPT work?" you'd get various links to search through.

Most of those explanations are full of jargon like "large language models" and "reinforcement learning from human feedback."

You could try asking ChatGPT how it works... and you can even tell it to "explain it like you're talking to a 5th grader."

You could do the same for any company you're researching. A lot of companies fail to explain their business models or technology well.

The companies and investment processes that succeeded even five or 10 years ago are not guaranteed to succeed in the future.

The faster you start understanding new tools – and the sooner you begin testing them and learning to adapt – the higher your chances of success.