It's window-dressing season in hedge-fund land...

The start of the new year is usually a time for funds to take a victory lap. Those that did well in the previous year will use it to their advantage. It's a good chance to get their names out there... recruit new clients... and even cement their legacies as investors.

Not many hedge funds are eager to share their performances this time around, though. The S&P 500 fell 19% last year. Around the world, economies struggled. Most traditional hedge funds that invested in stocks and bonds lost money.

Even so, some niche funds are coming out of the woodwork with big gains for 2022. It seems like it was the year of the macro hedge fund.

Rather than making bets on specific companies or industries, macro hedge funds predict how the economy will move. For instance, they position themselves for or against certain currencies... or bet on where inflation will go.

Some macro funds locked in seemingly impressive gains last year. As I'll explain today, you shouldn't abandon your investing strategy to follow what these folks are saying. Just because a fund made a lot of money doesn't mean it knows what it's doing.

Even a broken clock is right twice a day...

Macro hedge fund Odey Asset Management is a prime example of a firm that got it right – sort of.

Odey, which is based in London, made a big bet that inflation and political turmoil would hurt England's economy. It was right.

The fund's huge short positions on U.K. government bonds led to a record 152% return last year. That was more than double its second-best performance, which was in 1993. And it helped the fund recoup its losses from 2015 to 2020.

A 152% return sounds impressive. However, that's only half the story...

You see, like many other macro funds, Odey has been betting on inflation for years. And until now, it has been wrong.

Since the Great Recession, many macro funds have expected high inflation and a financial collapse as a result of government stimulus. They believe that increasing the money supply only hinders the economy.

These bets never paid off, though... because monetary policy isn't what caused inflation to surge. That credit goes to supply-chain shortages and a historic spike in consumer demand.

The firm was happy to announce its strong recent performance. It neglected to mention one important detail...

Odey – and other funds like it – did well for the wrong reasons...

Macro investors were right that inflation would rise in 2022. It just had nothing to do with their hypothesis.

As we discussed in August, the root cause of inflation was the supply-chain crisis. Huge demand coupled with limited supply meant the price of goods soared.

Importantly, this wasn't about monetary policy like macro funds expected. So while they ended up being right about inflation (eventually), it was mostly a lucky guess.

However, those hedge funds that bet big on rising inflation last year likely won't be as lucky in the months ahead. The economic landscape they were basing their predictions on is changing.

We can see this through the consumer price index ("CPI"). It tracks the change in prices of consumer goods.

The CPI peaked at 9.1% last June... and has been steadily declining since then. It came in at 6.5% in December. 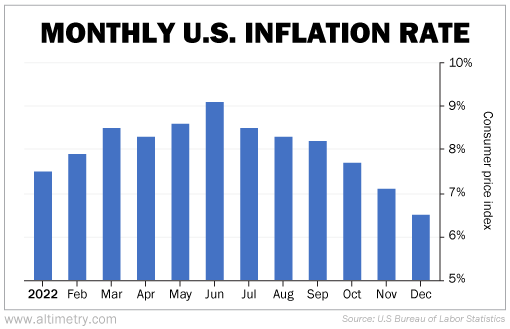 It's a similar situation for U.K. investors. While U.S. inflation peaked in June, U.K. inflation seems to have peaked in October.

Inflation was at record highs last year. Now, it looks like things are calming down. Funds that keep betting on higher inflation will likely be disappointed.

Don't get distracted by big wins from macro funds...

Investors are often tempted to zero in on the funds that did well in the previous year.

Oftentimes, they'll either hand over their money and become clients... or change investment strategies to follow these funds.

Some firms made a lot of money in 2022. That doesn't mean they were using solid analysis. It may just mean they got lucky. You should be skeptical about these macro funds' future performances.

While economic conditions are changing, our advice is the same as it has always been... Stick to good fundamental research. Back up your analysis with a holistic picture of the macroeconomy.

It takes a lot more than luck to keep being successful in today's environment.