Maybe the CEO Was on to Something...

It's rare that I laugh out loud when I'm listening to an earnings call...

In general, these quarterly calls are dull affairs. For every time you catch something like the Lehman Brothers CFO swearing on the company's third-quarter earnings call in 2008 – and management having to re-edit the audio afterward to remove the profanity – you get thousands that will put you to sleep.

So I perked up when I was listening to audio of the Cleveland-Cliffs (CLF) third-quarter earnings call last October...

You guys should resign for your lack of knowledge of things.

This is how the CEO of Cleveland-Cliffs answered a question during the call. And he didn't stop there...

You are a disaster. You are an embarrassment to your banks.

There was more, but you get the picture... CEO Lourenco Goncalves was on the attack against the Wall Street analysts covering his company. He was angry with analysts who he believed had an inaccurate perception of Cleveland-Cliffs. He was convinced their analysis led to inaccurate conclusions.

His rant eventually ended up all over the news. This story is still on Google search results when you look up just his name. Not the most professional behavior from the CFO of a $2 billion company...

But what if we told you he was right?

At least, he was right when he said, "You don't understand our business." We don't want to say those analysts should resign. We aren't saying they are an embarrassment. We are saying sell-side analysts definitely still don't understand the Cleveland-Cliffs business.

This is because those analysts are using as-reported financials. GAAP has a host of distortions embedded in it, including around things like excess cash, stock option expense, and replacement costs for property, plant, and equipment ("PP&E"). As you know, we specialize in Uniform Accounting – a more reliable way of looking at companies than the GAAP and IFRS accounting policies that distort the way we think about companies like Cleveland-Cliffs.

Once we make the appropriate adjustments, it's clear that the sell-side analysts don't know what they're looking at.

The only problem for Goncalves is they aren't too negative – they're too positive! Take a look... 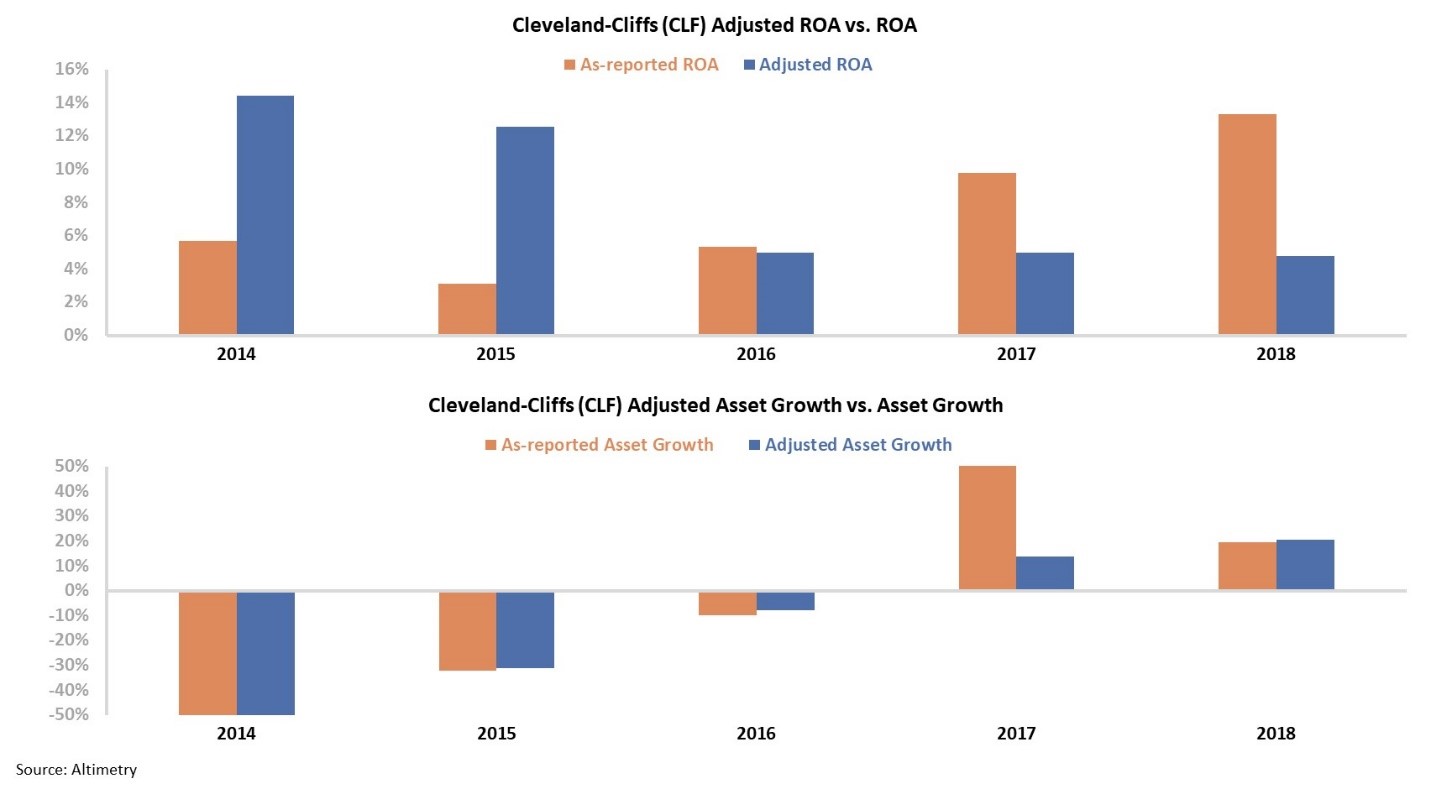 The two panels above explain Cleveland-Cliffs' historical corporate performance levels in terms of return on assets ("ROA") and asset growth. We're focused on the blue bars – which are the real numbers – compared to the as-reported numbers in orange.

Looking at this, Goncalves was right... in a way. Analysts using as-reported data have no idea how badly Cleveland-Cliffs has done recently.

Specifically, these investors who are an "embarrassment" might have thought Cleveland-Cliffs was seeing improving profitability from 2016 through 2018. As-reported ROA rose to 13% in 2018, up from lows of 3% in 2015. However, the real numbers show something different... Adjusted ROA is actually down since 2015, from 13% to 5%. It's been around 5% since 2016.

Because of the accounting, investors really didn't understand how bad Cleveland-Cliffs was performing. But since Goncalves' explosion last year, investors appear to have caught on... The stock is down more than 25% since the date of the call.

Cleveland-Cliffs might not be done falling, though... because GAAP numbers aren't just getting the returns wrong for the business – they're also getting valuations wrong.

Based on a GAAP price-to-earnings ("P/E") ratio of just 4.7, investors may think this company has finally fallen so far it can't fall further.

But when you clean up the accounting and look at the real numbers, the adjusted P/E ratio is actually at 13.1 right now. CLF is about 170% more expensive than investors realize! The chart below shows that this isn't a new phenomenon, either...

Goncalves was right – investors don't understand his company. But with Uniform Accounting, the insights start to become clear.

When GAAP has the power to mislead those in charge to think they have a good, cheap business, how is the average investor supposed to keep up?