Emotions like fear, greed, and excitement can cloud our better judgement of a situation and lead to suboptimal decisions. Behavioral economics is the analysis of how factors other than rational economic frameworks drive real-life human decisions.

You see this play out all the time in the markets. Just as a sector is finding a bottom, investors get scared and pull their money out for a loss. When an exciting young company like Beyond Meat (BYND) holds an initial public offering ("IPO"), investors buy shares at any price for fear of missing out... regardless of what the business' financials are.

Normally when news comes out, the market reacts in lockstep.

Just look at Netflix (NFLX)... The streaming giant saw its stock fall more than 10% when it announced its U.S. subscriber base shrunk for the first time in eight years.

But sometimes behavioral economics takes over. Sometimes the market reacts in unpredictable ways.

Take Skechers (SKX), for example. After the footwear retailer announced its second-quarter results on July 18, investors reacted as expected. Management announced an earnings beat and raised its guidance. The stock rose 13% the following day.

But since then, SKX shares have fallen more than 20% on no news.

The company had positive results in just about every category. Its sales grew 11% year over year. It continues to grow and dominate internationally. The company's margins improved, and it grew its e-commerce business. The only real negative was a minor drop in its U.S. wholesale business.

Following a successful quarter and improved guidance, excitement about the company blew over quickly. Why?

Investors appear to have a problem with paying for a company with below-average profitability. Despite recent momentum, Skechers remains a high-single-digit return on asset ("ROA") business when using as-reported data. The company's earnings may have grown, but it isn't improving the business.

However... the as-reported numbers are wrong. And investors are missing some huge potential upside... 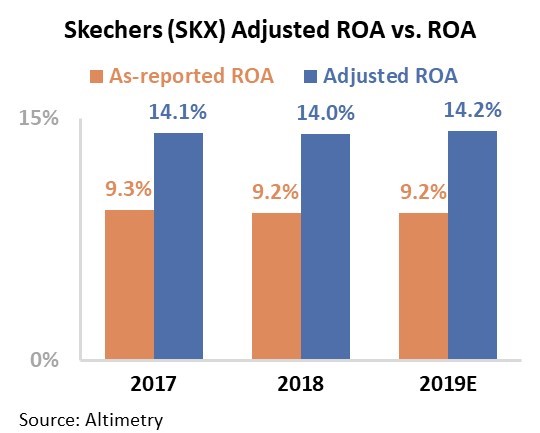 And when we apply our Uniform Accounting metrics, the distortions from as-reported accounting statements are removed – including excess cash distortions, operating lease capitalization versus expensing, and non-operating investment distortions – and we can immediately see that Skechers has significantly stronger ROA and earnings potential than the market realizes.

This is highlighted even further when looking at a longer-term comparison between the two sets of data.

The chart below reflects the real economic performance measures of Skechers after making many major adjustments to the as-reported financials... 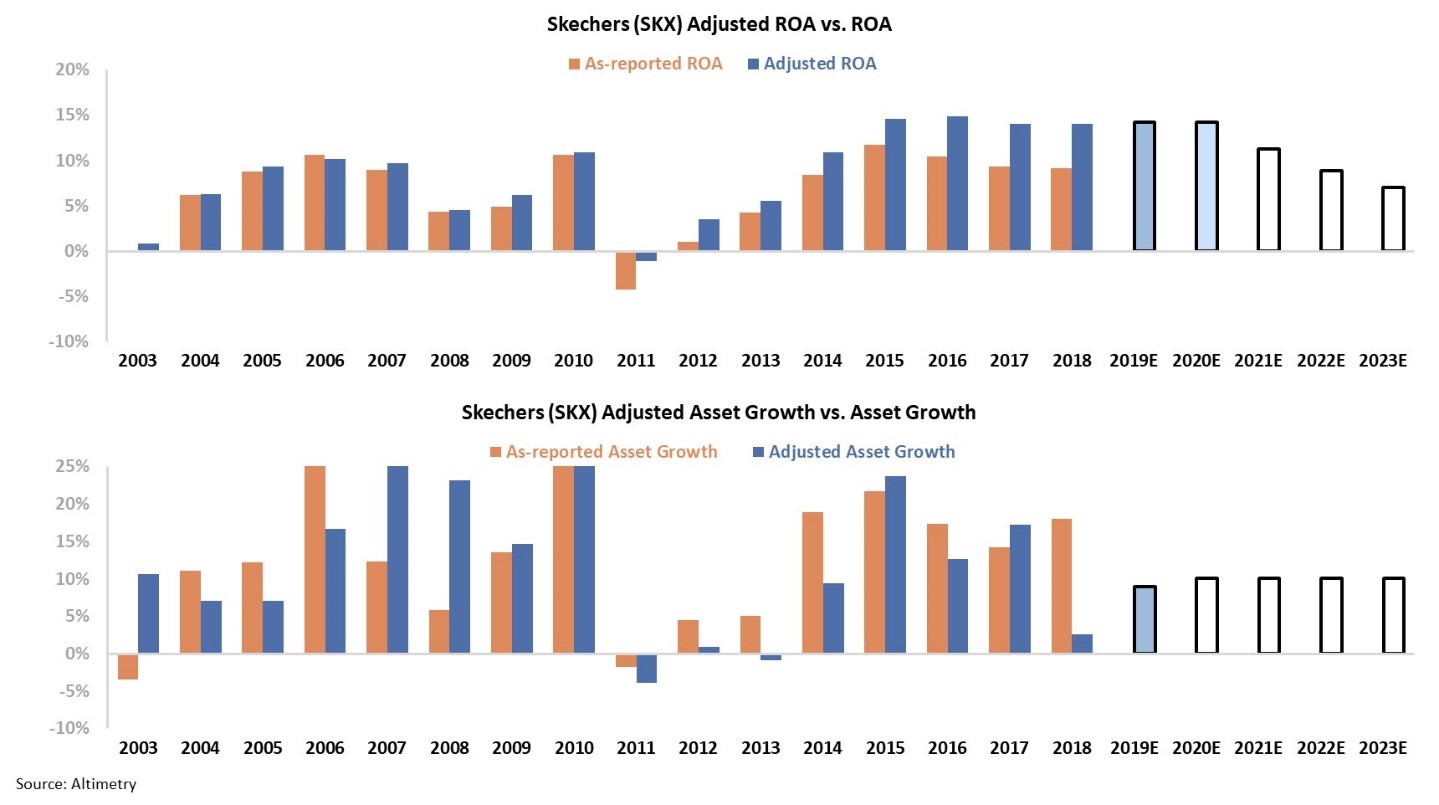 The two panels explain the company's historical corporate performance levels in terms of ROA and asset growth (dark blue bars) versus what sell-side analysts think the company is going to do in the next two years (light blue bars) and what the market is pricing in at current valuations (white bars).

When looking at as-reported data, Skechers has seen its ROA decline each year since 2015. Meanwhile, Uniform ROA has remained historically high at 14% to 15% over the same time frame.

At current valuations, the market (white bars) – using as-reported metrics – is expecting Skechers to see its ROA continue to decline.

Investors haven't acted irrationally and sold the stock out of fear... but rather because of bad data. With such a pessimistic market view, Skechers doesn't need to do much right for it to be undervalued.

Markets are pessimistic about Skechers because history indicates it is not a strong business, and these fears will continue in the years ahead. In reality, the company has maintained historically high profitability since 2015, and if management's most recent guidance is any indication, this is likely to stay the case.

This is yet another example of why you can't rely on so-called "standard" accounting practices.