The Dark Horse in the Sportswear Market

When Bill Bowerman and Phil Knight founded Blue Ribbon Sports in 1964, they had no idea what they were about to start...

Before Nike started making athletic shoes, there was very little progress in the market.

It's hard to picture a world without innovative sportswear. Imagine LeBron James running up and down a basketball court in a pair of Converse All Stars.

Nike has managed to stay ahead of the curve with its shoes. In the 1970s it was the Cortez. The '80s brought the Air Force 1 and the Air Jordan. To this day, Nike has continued to release signature shoe after signature shoe.

And the sportswear revolution isn't limited to shoes... Every time Michael Jordan would show up in a new warmup outfit, fans would line up to buy the full look.

Athletic clothes are becoming more popular – and acceptable to wear – off the field. In 2016, the term "athleisure" finally joined the dictionary. The sportswear revolution is here to stay.

I try to live by the "health is wealth" doctrine. And I believe you can't have a strong mind without a healthy body. Despite a sometimes hectic travel schedule, I try to get to the gym whenever time permits, at whatever hotel fitness center might be around.

Visiting so many different gyms, I do notice some trends in sportswear. Several watershed moments leading up to the current athleisure trend come to mind for me...

In the mid-90s, a former college football player named Kevin Plank took the moisture wicking material from his compression shorts and fashioned it into an undershirt for football players. The style was a hit... and apparel maker Under Armour (UAA) was born.

Under Armour gained quick popularity with football players... But Nike and Adidas were close behind.

However, having the best athletes doesn't mean you have the best company...

Under Armour announced its second-quarter results in July, and the numbers did not look good. The company missed on its earnings and revenue targets, and management guided expectations down for the rest of the year.

This news added to concerns about the company's ability to execute. Under Armour has historically lagged its competitors in efficiency, advertising, and innovation.

The stock fell 15% in the hours following the announcement. Worse yet, shares are down more than 20% since their July 29 peak.

But things are not as bad as they seem. Take a look... 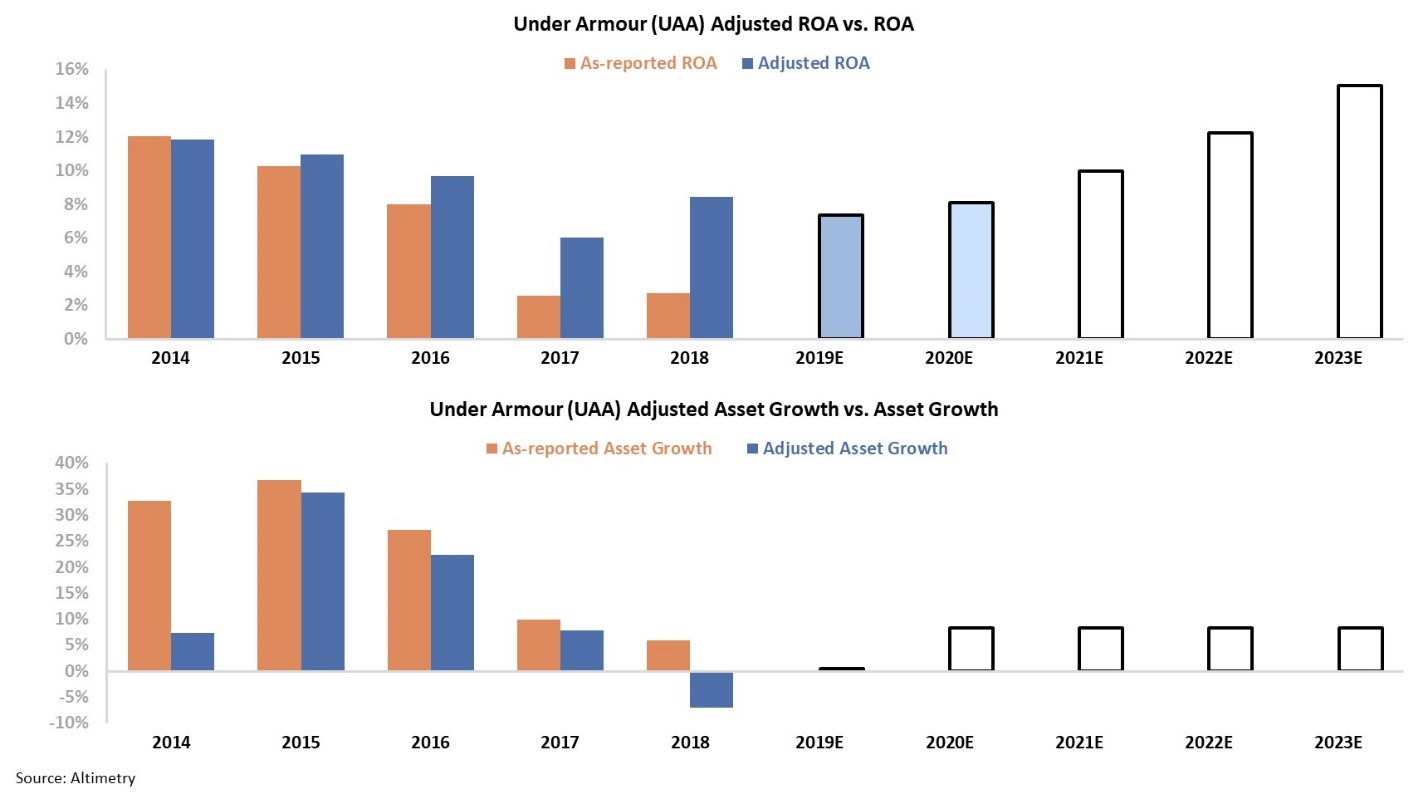 Investors fear Under Armour is failing. When looking at the company's recent return on assets ("ROA"), it seems like they're right... Under Armour's ROA fell below its cost-of-capital in 2017, and it has remained at 3% since.

Luckily for Under Armour, this does not tell the right story.

When we apply our Uniform Accounting metrics, the distortions from as-reported accounting statements are removed – including lease capitalization versus expensing, treatment of goodwill, and excess cash – and we can see that there is hope for Under Armour...

The two panels in the above chart explain the company's historical corporate performance levels in terms of ROA and asset growth (dark blue bars) versus what sell-side analysts think the company is going to do in the next two years (light blue bars) and what the market is pricing in at current valuations (white bars).

Traditional accounting metrics (orange bars) can distort how investors view a stock. Without understanding a company's true profitability, it's impossible to properly analyze its stock. 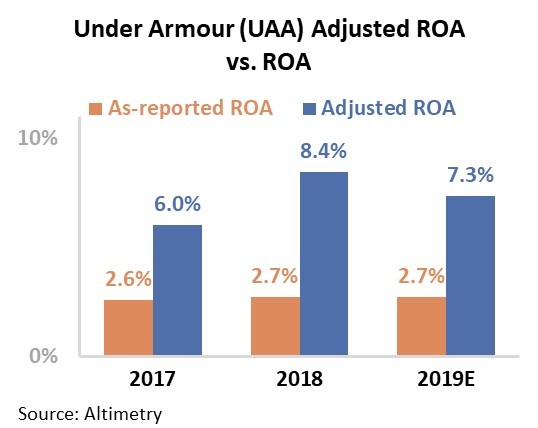 Looking at the most recent years, Under Armour is more profitable than investors think... ROA actually bottomed out at 6% in 2017, and improved to 8% last year, and is forecast to be around 7% this year.

Investors were concerned Under Armour wouldn't be able to improve ROA above its cost-of-capital.

But as it turns out, the company's ROA never fell below cost-of-capital.

The market punished Under Armour without good reason. Investors thought their fears were coming true, but it was just unclear accounting.

Investors missed out on signals that the company is already rebounding, and performance was never as bad as expected to begin with.

Standard accounting metrics once again misled investors and created too much noise in the market.