This Company Is Glad to Be a Middleman

You've heard about it in the news...

After the two accidents, aviation administrations around the world jumped into action. Within a few days of the second crash, the global 737 MAX fleet was grounded.

Airlines were left scrambling to fill their routes. They simply had fewer planes to work with.

And it may have even affected you. Our Director of Research almost had a flight to Glasgow canceled before the airline scrambled to find a substitute plane to make the flight.

Our company airline of choice is American Airlines... which has the third-largest fleet of 737 MAX aircraft in the world. I've noticed fewer – and fuller – flights on my regular rounds meeting our clients up and down the Northeast since the grounding.

Massive flight delays, canceled routes, and an aircraft shortage have taken their toll on airline companies.

These horrific crashes were disastrous for Boeing (BA).... After the first accident, the company's stock fell as much as 25% from its highs. It moved higher by March, but collapsed again after the second accident. Shares are still down roughly 15% from pre-grounding levels.

Meanwhile, one group of companies benefited from the sudden aircraft shortage.

It's not aircraft manufacturers... and it's not other airlines.

It's the middlemen: aircraft leasing companies.

Aircraft leasing companies are fairly simple. They purchase planes from manufacturers and lease them to airlines.

But the value they provide is massive... They provide a steady source of income to the manufacturers.

Additionally, leasing tends to make financial sense for airlines. It allows airlines to stretch their costs over many years. Leasing companies also give airlines the chance to quickly grow their fleet. This is important...

With the recent aircraft shortage, aircraft leasing companies are poised to succeed.

The company is one of the world's largest aircraft leasing businesses. It owns roughly 1,000 planes from Airbus, Boeing, and others.

In the wake of the 737 MAX groundings, AerCap had one of its best quarters ever – record earnings per share, revenue growth, and almost 100% fleet utilization in the second quarter of 2019.

As airlines have grounded their 737 MAX fleets, they have scrambled to AerCap for replacements.

On top of this, AerCap's stock looks cheap. As you can see below, its price-to-earnings ("P/E") ratio is currently around 7 – well below the market average of about 20.

But even though AerCap benefits from the MAX groundings, its stock is down slightly over the last year, and flat since management announced the record-setting earnings this past quarter.

It seems like investors should be rewarding the company for its performance. So what gives?

The problem is that investors already have been paying up for the company's earnings.

Traditional accounting metrics tend to be unclear or misleading for investors. The way GAAP and IFRS are designed can distort financial metrics and lead to faulty analyses.

That's why we use "Uniform Accounting" metrics to simplify and standardize financial analysis. With Uniform Accounting, distortions and discrepancies like treatment of goodwill and interest expenses are removed.

With a "Uniform" view of AerCap, we can immediately see why its stock has barely moved in the last year...

The dark blue bars in the above chart represent AerCap's Uniform P/E. Instead of trading at a ratio of about 7, as traditional metrics would have you believe, we can see the company actually trades at a ratio of roughly 18. This is much closer to corporate averages.

The market already understands how valuable AerCap's business is.

At these levels, the company does not look cheap – but rather fairly valued. And when looking at AerCap's performance, we see a similar pattern... 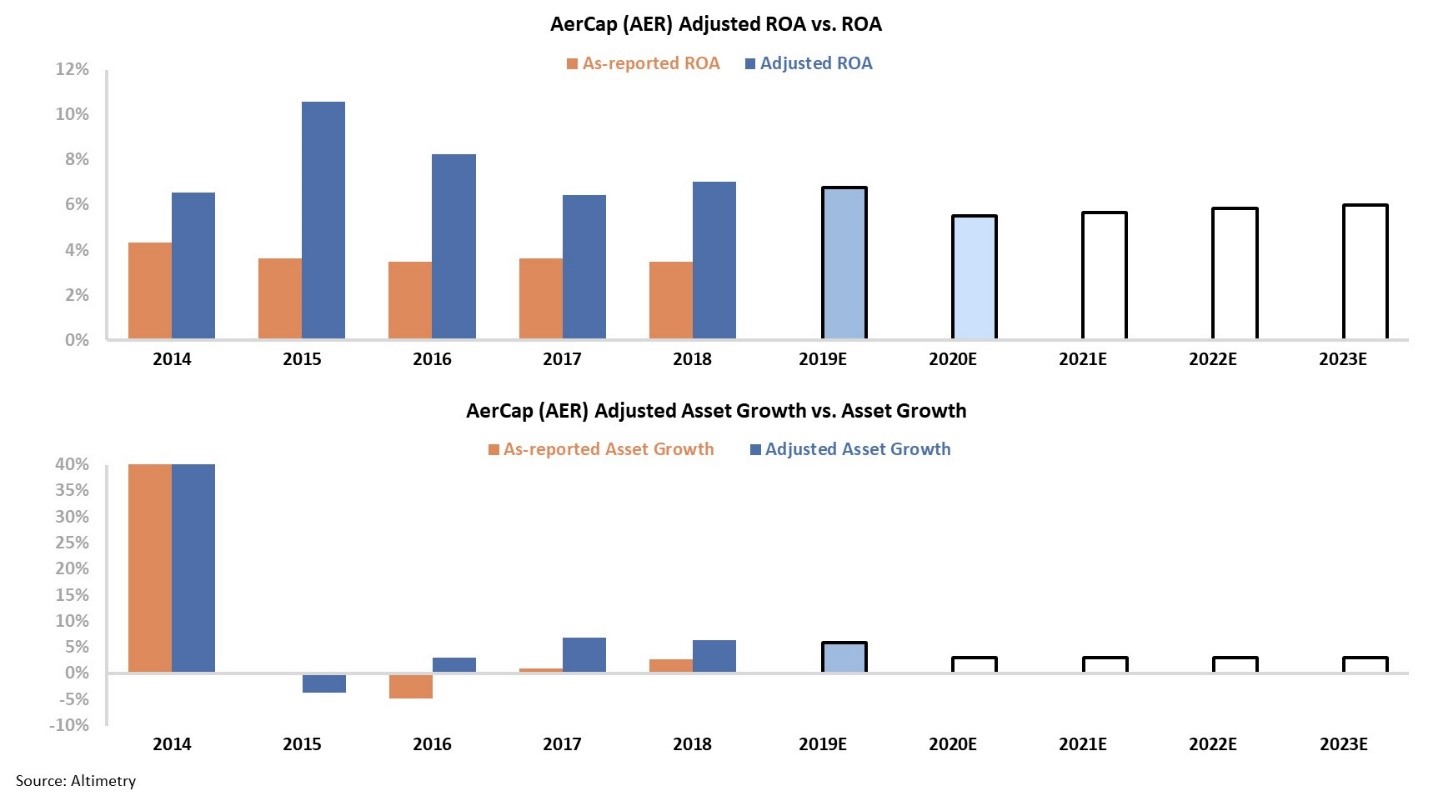 The two panels above explain the company's historical corporate performance levels, in terms of return on assets ("ROA") and asset growth (dark blue bars), versus what sell-side analysts think the company is going to do in the next two years (light blue bars), and what the market is pricing in at current valuations (white bars).

At current valuations, the market (white bars) is expecting AerCap to see its ROA slide slightly after a good year in 2019, then remain around 6% levels.

The market already recognizes AerCap's strong performance. It also realizes the recent rise in AerCap's performance from the 737 MAX is a great short-term boost. But this is not sustainable...

When you look at the company through the Uniform Accounting lens, you can see it is expected to continue performing in line with the last few years. At a roughly 18 P/E ratio, AerCap is not a cheap stock.

This is why the stock hasn't done anything since AerCap's earnings release. The market already understood reality.

AerCap is not the screaming buy that as-reported metrics might imply... It's more likely to be dead money than a three-bagger.

When you can't trust as-reported financials to value a company, what can you trust them for?