This Company Owns the Cashless Society

On September 18, 1958, the "Fresno Drop" completely changed the banking and payments industry...

While the exact history of the credit card is a bit hazy, the original cards can be traced back to early single-store "charge cards" in the 1920s and '30s. These allowed trustworthy customers to pay their bills on a monthly basis. In 1950, the Diners Club card became the first charge card accepted at multiple stores. Then, on September 18, 1958, the "Fresno Drop" whisked in the payment revolution...

In a promotional stunt, Bank of America (BAC) mailed 60,000 ready-to-use BankAmericards to unsuspecting Fresno residents. This was the first universally accepted credit card with a revolving balance, meaning people could carry the balance from month to month.

You'd think a mass credit-card mailing like that would be illegal. But it wasn't... The promotion was wildly successful with customers.

Bank of America ultimately lost between $10 million and $20 million in delinquent credit and PR costs on the Fresno Drop. That doesn't seem like a very good return on investment, but the stunt kicked off American credit-card mania.

With Bank of America's success, the other big banks scrambled to catch up. In order to make up for lost time, they banded together on a common card-processing system first known as the Interbank Card Association. The brand quickly shifted to the "Master Charge" name, and eventually became what we know as Mastercard (MA).

Meanwhile, BankAmericard and its partners rebranded as Visa (V) in 1976. Visa and Mastercard effectively owned the credit-card processing industry, and were hugely profitable as a result. The more credit-card transactions, the better.

However, the industry is changing... We're entering the era of digital payments.

In recent years, digital-payment companies like Square (SQ) and PayPal (PYPL) and tech juggernaut Apple's (AAPL) Apple Pay have established the "contactless exchange" as the new norm. With the explosion of cashless-transaction technology, it's becoming easier and easier for small businesses to accept digital payments.

Thirty years ago, businesses that didn't want to pay credit-card transaction fees would simply operate as "cash only." Today, that's not really an option. Consumers around the world are carrying less cash than ever before...

And this has great implications for one section of the digital-payments ecosystem: payment-processing companies like Visa and Mastercard.

That's right... the businesses that are winning from this transition are not one of the cutting-edge technology companies or new payment-system firms. The winners are the same two companies that supported the credit-card movement in the 20th century.

Even as transactions move from physical credit cards to contactless and digital payments, the processing companies provide most of the back end to this technology.

Mastercard in particular is booming with these new technologies. The Apple Pay card, PayPal's Venmo payment system, and Square's business debit card are all backed by Mastercard.

However, investors might be misinterpreting the impact the digital-payment revolution has on the processing industry. Below are Mastercard's as-reported return on assets ("ROA") since 2014. This is obviously a profitable company, but since the digital-payment explosion, ROA has remained flat at 21% to 22% levels.

However, when looking at as-reported financial data, companies like Mastercard look far weaker than economic reality would highlight. If we apply our Uniform Accounting metrics – adjusting for items such as goodwill and stock option expenses – we can immediately see a different picture...

The chart below shows the company's historical corporate performance levels in terms of ROA and asset growth (dark blue bars) versus what sell-side analysts think the company is going to do in the next two years (light blue bars) and what the market is pricing in at current valuations (white bars). Not only is Mastercard far more profitable than the as-reported ROA highlights, but its ROA is improving rapidly. 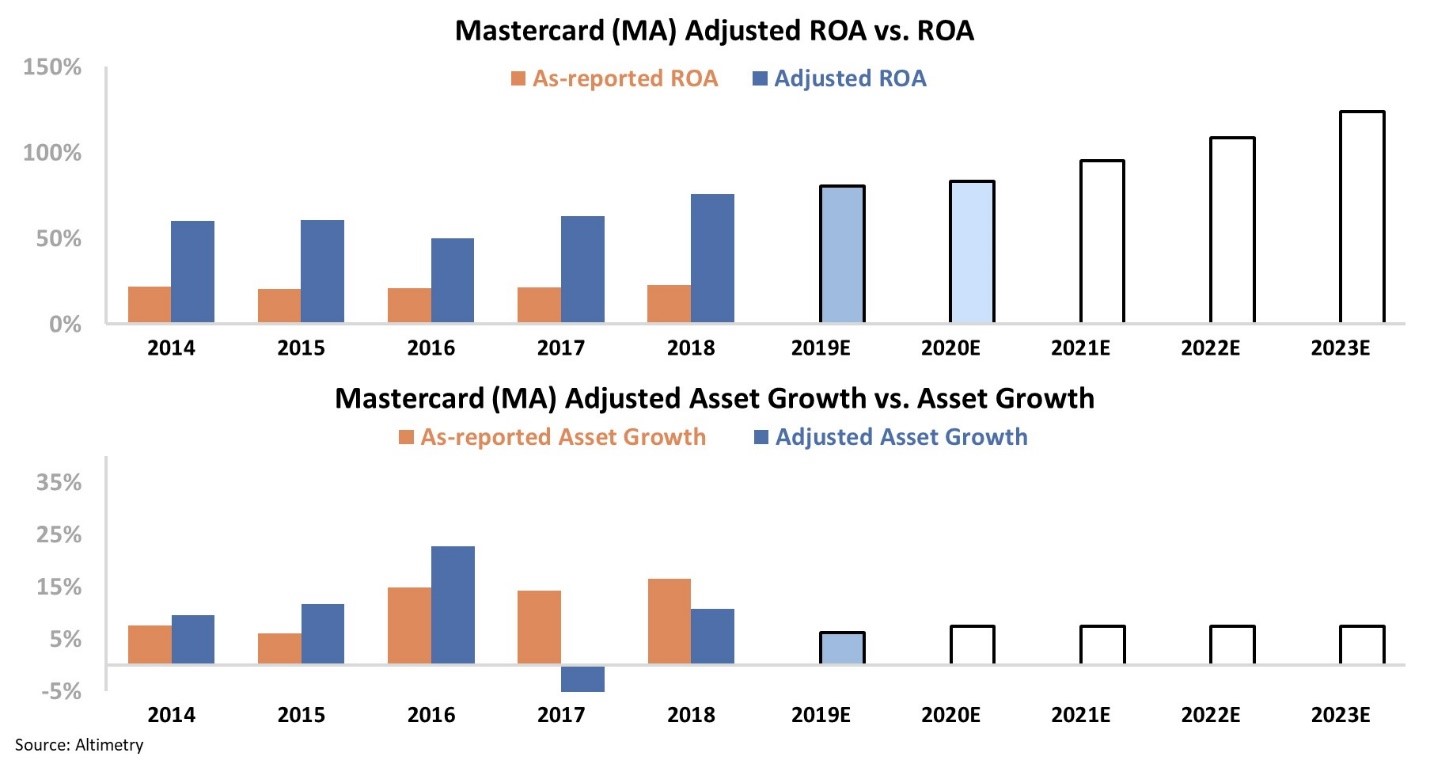 From 2016 to 2018, the company's ROA expanded from 50% to a staggering 76%. Analysts expect this trend to continue in the coming years as digital payments gain increasing popularity.

Investors may find themselves weary of Mastercard's valuations. Currently, the company's price-to-earnings ("P/E") ratio is around 32, well above the corporate average ratio of 20.

However, just because a company is trading above market averages does not mean it is expensive... In the context of Mastercard's true ROA expansion, the current P/E levels are easily justified.

As-reported metrics might make you think that Mastercard is a short. It looks like a company with high valuations and stagnant returns.

Mastercard is anything but that... The company is the winner in the shift to digital payments, and it is printing money because of this growing transition.

It's easy to miss out on market trends when you're looking at as-reported data. Uniform Accounting allows you to see trends in real time... before it's too late.