Wall Street is famous for having a good memory...

When a company makes a mistake, the "pros" rarely forget it.

Hundreds of companies have wound up on Wall Street's Blacklist as a result. This could be thanks to things like corporate-governance shortcomings, lawsuits, or past bankruptcies.

When a company is designated to the Blacklist, its fate is basically sealed. The largest investment firms rarely backtrack on the decision.

Most blacklisted businesses deserve their place. But Wall Street's draconic methods mean that plenty of strong companies get ignored because of one or two blips in their histories.

So when a company is wrongly put on the Blacklist, it can be a huge moneymaking opportunity...

Here's where everything went south for LHC...

The company had enjoyed healthy growth from its founding in 1994 through 2010. But in 2011, LHC came into the spotlight for all the wrong reasons.

Medicare filed a lawsuit against the company for violations of the False Claims Act. The lawsuit claimed that LHC had been improperly billing customers for unnecessary services. The company was fined $65 million.

The market swiftly punished LHC. Its stock price fell more than 50% over the course of 2011.

LHC addressed these issues and cleaned up its reporting. But Wall Street was loath to ignore the blemish on its reputation. That's due to as-reported financials and the distortions caused by generally accepted accounting principles ("GAAP").

When you look at LHC's GAAP numbers, it seems like the 2011 lawsuit is still holding it back.

Considering that the corporate average ROA is 12%, you can see why Wall Street kept LHC on its Blacklist for so long...

Thankfully, we have Uniform Accounting to clear up these distortions...

When looking at LHC through this lens, the story becomes clearer.

The company's returns did take a dive in 2011. However, it has consistently been improving since fixing its practices. Despite the downturn, Uniform ROA has never fallen below the corporate average. LHC even earned an impressive 31% return in 2021.

Based on Uniform ROA, we can see that LHC has earned a second chance. After cleaning up its business in 2013 and 2014, Wall Street was slow to pull the company off its Blacklist. That created a huge opportunity for savvy investors... 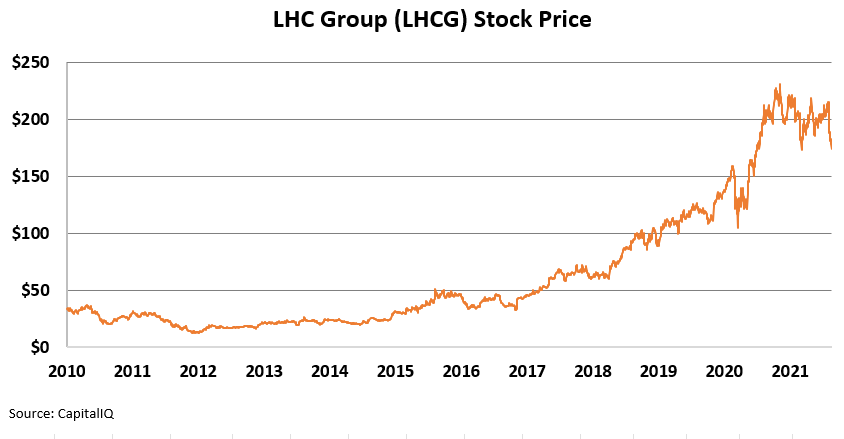 LHC is once again focusing on its customers... and riding the at-home health care trend to success. But many investors missed their chance because the company was still stuck on Wall Street's Blacklist.

Editor's note: Most of the companies on Wall Street's Blacklist deserve to be there. But sometimes, the experts punish the wrong stock – and in-the-know investors can make a fortune when they correct their mistake. Now, Joel believes his system has detected another of these rare moneymaking setups...

According to Joel, as Wall Street prepares to take one massively undervalued business off the Blacklist, shares could spike significantly higher virtually overnight. He's issuing the "mother of all buy alerts" to help you take advantage... Plus, he explains why this story goes much deeper than a single ticker. Click here for the full details.