Why Crashing Oil Prices Won't Cause an Economic Recession

Regular Altimetry Daily Authority readers know we’ve been consistently saying that while the current environment is going to be volatile, it’s a time of opportunity.

Two gurus we listen to have been saying the same thing… and just last week, they both explained why.

Empire Financial Research’s Whitney Tilson – who’s had his finger on the pulse of all things coronavirus over the past few weeks – hosted a special online event on Tuesday. During it, he highlighted both the insights he’s gathered from all the investors and experts he’s connected with regarding the coronavirus. He also explained why he’s incredibly bullish about the market, and told attendees about two of his favorite stocks right now.

You can watch a full replay of the event for free right here.

Also, Porter Stansberry from Stansberry Research – our partner in starting Altimetry – hosted a separate event on Thursday, similarly highlighting his own thoughts on the market and when he’s looking to jump in with his own money. He also addressed something big that he and a small team have been working on behind the scenes for the past few weeks.

Click here to see the replay of his event… it’s also free to watch.

Keep in mind that going forward, volatility is still likely to continue. But it’s useful to hear how some of the big investing minds – who come from different directions in terms of data and analysis – are all seeing reasons to be optimistic.

We highly recommend you listen to both these events, and stay tuned to the Daily Authority to see what’s really going on in the markets.

And we don’t blame them.

It’s hard not to be concerned when you heard a few weeks ago that oil prices had their worst day in nearly 30 years… or that the stock market had its worst week since the week of Black Monday in 1987.

We aren’t going to rebuff those claims – they’re absolutely true.

That said, here at Altimetry, we don’t look at those two data points as “similar” or compounding on one another. In fact, today’s essay may be a reversal of what you’ve heard about oil markets…

As you’ve probably seen in the news, oil prices have been struggling in line with the stock market.

This has really been driven by two separate issues.

First, the coronavirus outbreak has made investors worried about lower-than-expected demand for oil in the coming months.

As, if not more important, some of the major oil producers around the world – including OPEC and Russia – have basically refused to come up with a production cut plan that everybody is happy with.

These two factors have sent crude oil prices off by more than 30%, and have kept them low since.

Not only that, but there’s a lot of bearish sentiment coming from Wall Street and the oil industry. Some analysts and executives have been quoted saying they expect oil prices to fall as low as $10 this year.

Many people think that this is a sure sign of a bad recession.

While that would be a bad sign for the oil industry, it’s not as certain as a recession indicator…

Looking back through history, we can see there’s basically no relationship between sharp falls in oil prices and economic recessions.

The chart below from the Federal Reserve Bank of St. Louis shows the past 34 years of oil prices – as measured by West Texas Intermediate (“WTI”) crude – overlaid with the past three recessions. Take a look… 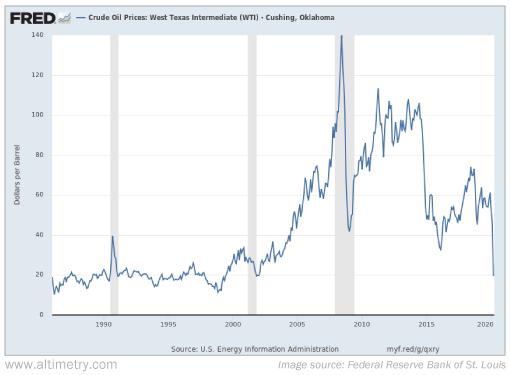 As you can see, each of these recessions has had a different relationship with oil prices.

The early 1990s recession was minor… And we actually saw higher oil prices after it ended. While there was a minor price spike and subsequent fall, that happened within the recession period.

Compare this to the dot-com bubble, where oil prices fell modestly before recovering within a few months.

Additionally, oil prices actually reached an all-time high in July 2008, which was right in the middle of the Great Recession (from 2007 to 2009). Prices did fall, but still remained well above historical averages for the next several years.

This takes us to 2014, which was the start of a multiyear oil glut that sent prices tumbling to 10-year lows by 2016.

We remember having a similar discussion with clients and investors then like we’re having today – many thought that was a surefire indicator that we were entering a recession.

You see, outside the oil industry, low oil prices can be an economic stimulant.

Thinking logically, just about every consumer and corporation needs to pay for fuel. Lower fuel costs translate to more free capital, meaning corporations have cash to invest in growth and investors have more money to spend and stimulate the economy.

Additionally, when everybody was worried about oil prices in 2014, we took it as a signal that oil was going to help support the bull market. Five years later, our thesis appears to have worked out nicely.

Coming back to today, we won’t be certain of the full impact of coronavirus for at least a few months. We also may see our first recession that isn’t driven by a credit crisis if enough businesses stay closed.

That said, the important takeaway to remember is current oil prices won’t force us into a recession. Rather, current low prices are actually their own stimulus for the economy going forward… and a reason for optimism for a stronger recovery after this slowdown.