Despite its numerous advancements, Tesla suffers from the same troubles as any car company...

Tesla (TSLA) bulls rejoiced last year as the company delivered 936,000 cars, an 87% increase from the prior year.

While Tesla shareholders may tout 2021's high returns, Whitney Tilson at our sister research company Empire Financial Research highlights a statistic that should send shivers down the spines of any Tesla holder.

More competitors are entering the electric-vehicle ("EV") space. In aggregate, Tesla's market share of EV sales dropped year over year, and Tesla's large lead is being lost to names like Ford Motor (F) and Volkswagen (VOW3.DE).

Tesla has also been quietly dealing with multiple safety issues with its vehicles over the past year.

An issue opening and closing the trunk damaging the rearview camera resulted in more than 350,000 Model 3 sedans being recalled. Nearly 120,000 Model S sedans were recalled because of a misaligned latch that opened the front hood unexpectedly.

One of Tesla's defining features is its autopilot system, but even that has proven faulty. The National Highway Traffic Safety Administration investigated 11 cases where the autopilot failed to recognize parked emergency vehicles, one of which resulted in a death.

Pressure from the safety agency resulted in a hesitant recall from Tesla for vehicles in October 2021.

Recalls are a common way to see returns flatline in the auto industry...

While necessary to keep drivers safe, recalls, unfortunately, come with a cost that automobile makers must incur.

Tesla's high valuations appear to assume it will never incur these costs. But the recent recalls prove that Tesla is not immune from faults and suffers from the same problems all other automakers do.

Current valuations also assume Tesla will continue to dominate the EV market, even though recent data shows the company losing share to competitors. Tesla is already losing to other smaller EV manufacturers, and this is before major auto companies launch new EVs, like Ford's F-150 Lightning electric truck.

Recently, Tesla has been valued as a tech company instead of a car company. But if it wants to continue to hold its share within the EV market, Tesla will have to position itself more like a traditional auto company.

This shift will come with traditional auto company profitability, which typically sits at around 5% to 10% return on asset ("ROA") levels.

To justify Tesla's current valuations, it can't look too much like an auto company.

Investors are expecting one of two scenarios...

By utilizing our Embedded Expectations Analysis ("EEA") framework, we can see what investors expect Tesla to do at its current stock price.

Stock valuations are typically determined using a discounted cash flow ("DCF") model, which makes assumptions about the future and produces the "intrinsic value" of the stock.

But here at Altimetry, we know models with garbage-in assumptions based on distorted GAAP metrics only come out as garbage. Therefore, we use the current stock price with our EEA framework to determine what returns and asset growth the market expects.

One of these two scenarios would need to be true for Tesla to be worth its current value of slightly more than $1,000 per share.

The first is that Tesla will keep growing at 90% a year for the next five years and see ROA level out at 14%. This would be above the high end of auto profitability, which ranges between 5% to 10%.

In this case, Tesla will sell 23 million vehicles a year, roughly a third of all vehicles sold. This is about two times the amount automobile giants Toyota Motor (TM) and Volkswagen sold in their best years ever. 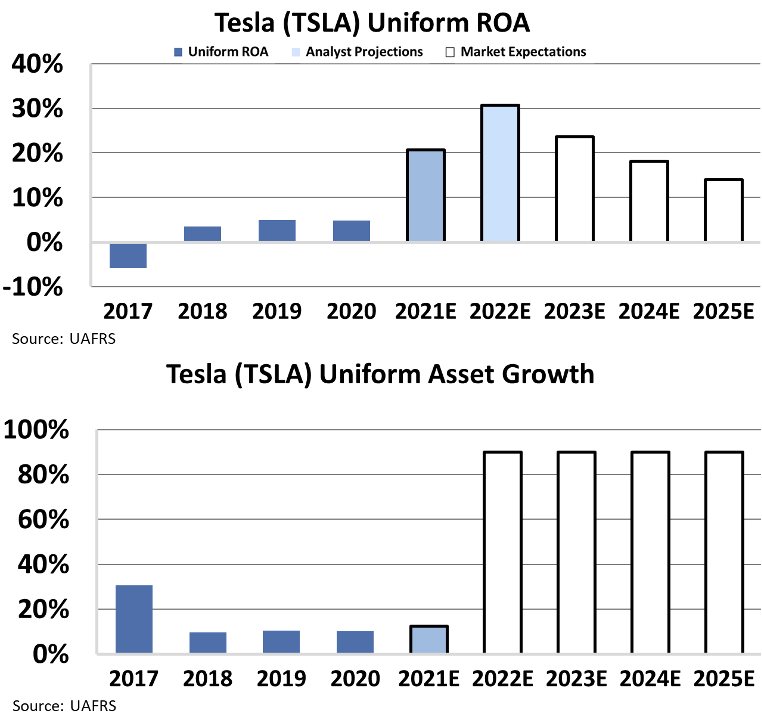 The other scenario still requires Tesla to grow 60% a year, making it as large as Toyota Motor or Volkswagen by 2025.

But this comparatively smaller growth scenario would require ROA to continue expanding to an impressive 29%. This is about 3 times what even the best-in-class car companies can generate. 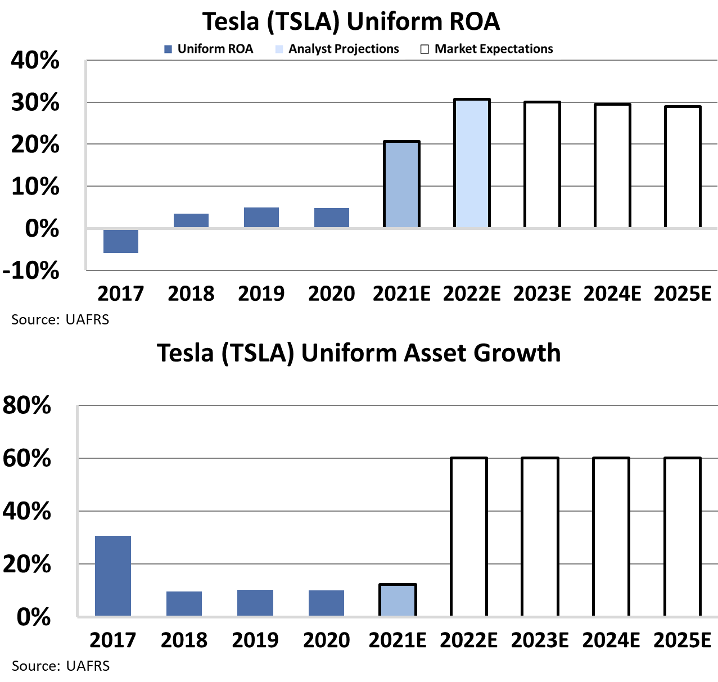 As Tesla aims to compete with a growing number of EV manufacturers, it is destined to start acting more like a traditional auto company, which means a large reduction in growth or returns, each of which spells disaster for valuation.

While investors may be celebrating 2021 manufacturing numbers now, the underlying numbers and data say that Tesla is stuck between two impossible paths to justify its current stock price.

While the EV space is everchanging, so is the demand for other tech-enhanced products. One of the most lucrative themes in the stock market right now is Software as a Service ("SaaS").

We found that 72 of 75 companies using the SaaS model posted huge gains in a recent backtest. Among these 75 SaaS companies, the average return netted 75% a year.

And these stocks are dwarfing gains from other investing strategies...

That's why I put together a video presentation where I walk you through the powerful SaaS business model and show you how to get the name of the next potential big SaaS winner.

You can watch my presentation right here.

Backed Into the Corner of the Streaming Wars, This Tech Firm Is Playing Its Final Gambit

Mr. Market May Finally Push This Ride-share Company Toward Profitability

Wall Street Has Given Up on This Once-Trendy Fashion Brand

When It Comes to Investing, EQ Matters More Than IQ

Despite the World's Best Efforts, We Just Can't Quit Coal