Why The 'Hot' Housing Market Is Likely to Continue

Many news articles are floating around with sensational headlines about the 30-year mortgage rate "jumping" higher.

Despite the incremental rise in the 30-year mortgage rate, it doesn't mean the housing market will go up in flames.

The "jump" in the 30-year mortgage rates refers to a move higher to around 3%. According to the U.S. Federal Reserve, current figures are still near the lowest mortgage rates in history, with data spanning back to the early 1970s.

Even 30-year jumbo mortgage loans (those above the maximum amount allowed by government-backed lenders Fannie Mae and Freddie Mac) are hovering around 3.1%.

These rates are not exactly levels that are going to discourage buyers from financing a new home purchase. And thanks to these ultralow rates, the housing market is still primed for activity... which could mean another round of tailwinds for home prices.

With housing inventories at all-time lows and structural shifts developing in how we live and work in a post-pandemic world, we expect homebuyers to keep taking advantage of easy credit conditions and continue snapping up properties.

To deal with this heightened demand for mortgages, banks are doing everything in their power to keep the lending spigots open wide...

One of the key macroeconomic metrics we monitor here at Altimetry is the availability of credit, which isn't just the lifeblood of the housing market, but of the financial markets and the entire economy as well.

Credit is incredibly important because it is what drives the economic cycle. If banks and other lenders make it easier for individuals and businesses to take out loans, they are more likely to borrow money and spend on goods and services, driving growth in the broader economy.

If economic conditions mean financial institutions refrain from lending, higher borrowing costs will deter individuals and businesses from spending, pushing the economy in the opposite direction.

An easy way to think about it is to imagine how a single dollar flows through the economy.

When I spend money on a meal at my favorite restaurant, that payment goes to the restaurant owner, who pays their workers' wages and buys more fresh ingredients from suppliers. Those workers then spend their paychecks on various other goods and services, as do the farmers who grew and sold the produce.

In other words, one person's spending is another person's income. When aggregate spending in the economy declines, so does income.

With credit, however, lenders can create an "IOU" that borrowers promise to repay. This allows for more spending to take place in the economy than would otherwise be possible.

If this spending is productive and the returns it generates are sufficient to repay debt, the economy will expand rapidly.

The economy gets into trouble as it did before the Great Recession when the debt taken on by individuals and businesses is excessive and unable to generate the necessary repayments required by lenders.

If this occurs, the banks and other creditors will slow lending, exacerbating the situation and potentially leading to a debt crisis that can impact the entire financial system.

It's a cycle that always has and always will play out because it's driven by human nature and the structure of our economic system.

To understand when the cycle we are currently in might turn, which it inevitably will, we keep our eye on this metric...

The survey is a set of questions sent out by the Fed quarterly asking bank loan officers (who originate loans) to make standards easier, the same, or harder for borrowers.

This provides the central bank and intelligent investors some sense of how banks feel about the economy and where we are in the credit cycle.

Last quarter, we saw one of the most positive in the past 30 years as banks made money easier to access than ever, with the speed of easing at its highest percentage on record. 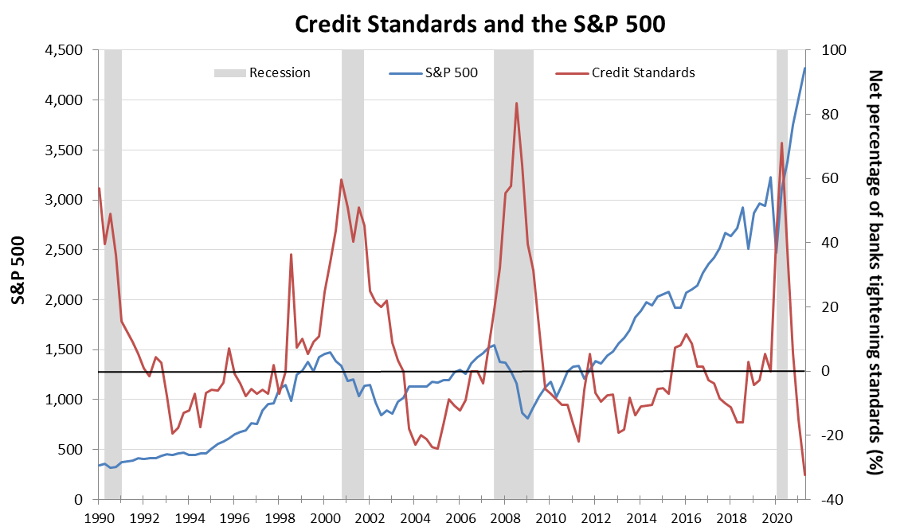 This suggests banks are willing to make loans to almost anyone looking to borrow.

Debt continues to fuel an economy with pristine corporate and individual balance sheets, something we will touch on more in the weeks ahead.

With ample room to borrow before getting into trouble, the debt picture of the economy looks very stable at the moment. That's despite the talk you might be hearing in the financial press.

That's why even though we see some near-term volatility in the market, we don't think there's any risk of a prolonged bear market or recession any time soon. With healthy access to credit, the economy and market have nowhere to go but up over a longer time frame.

If you want to learn more about what drives both the economy and stock market over the long run, subscribe to Altimeter's Hidden Alpha – which includes our Timetable Investor.

Timetable Investor readers get first access to our macro thoughts, insights, and data, along with other market ideas you won't hear anywhere else.

You can get access to it by subscribing to our Altimetry's Hidden Alpha newsletter. Each month you'll receive a monthly large-cap stock pick that is the culmination of our proven research process alongside The Timetable Investor.

To learn more about Hidden Alpha – and how to save 75% off the first year of a subscription – click here.