Why the Labor Market Is Guiding the Federal Reserve's Actions

While Federal Reserve Chairman Jerome Powell largely received good marks for his keynote speech at this year's virtual Jackson Hole meeting, many still have reservations about the Fed's current strategy in dealing with inflation.

For some critics, the central bank's apparent reluctance to acknowledge that "transitory" inflation may be more lasting than their models suggest is a big reason for concern. They think rampant inflation may force the Fed's hand to raise interest rates sooner than expected.

When looking at the numbers last week, we said the risk of inflation is overblown.

We think it might be useful to look back at this year's presentation and Powell's statements on monetary policy in the context of 2020's paradigm-shifting Jackson Hole meeting.

In 2020, Powell laid out a new monetary policy framework based on an idea called "average inflation targeting." This means the central bank will allow inflation to overshoot its 2% annual target to make up for periods when inflation was less than 2%.

Traditionally, monetary policymakers deferred to the idea that decreasing unemployment past a certain threshold, known as the "natural rate" of unemployment, would inevitably lead to higher inflation, a relationship made famous by the Phillips Curve model.

According to this logic, as unemployment declined and more people entered the workforce, demand and spending in the economy would increase, pushing up prices.

As a result, the Fed's historical strategy for a recession recovery was to raise interest rates as unemployment rates grew smaller and smaller. This would cool the economy down and prevent inflation spikes.

However, with more research, the data supporting this model has become shaky, leading Powell and others at the Fed to abandon it in favor of the new framework. By allowing for a period of inflation above 2%, the Fed is focused on getting as many people back to work as possible before raising interest rates, ensuring a smoother recovery.

The Fed's inflation targets have been met... But that's not the case for the labor market...

Looking at the Fed's actions through the context of the new framework, it is pretty clear why Powell is still not overly worried about inflation and is more concerned about the labor market.

Unemployment rates in the U.S. have fallen below 6%, an impressive improvement considering the pandemic-induced recession's severity, which led to unemployment rates above 14% in April 2020.

The lowest wage-earners were benefitting most from a strong economy and labor market in 2019. However, there is still more progress to be made to get unemployment back to the historic pre-pandemic lows of less than 4%. The Fed's policy aims to reverse the damage of the pandemic. 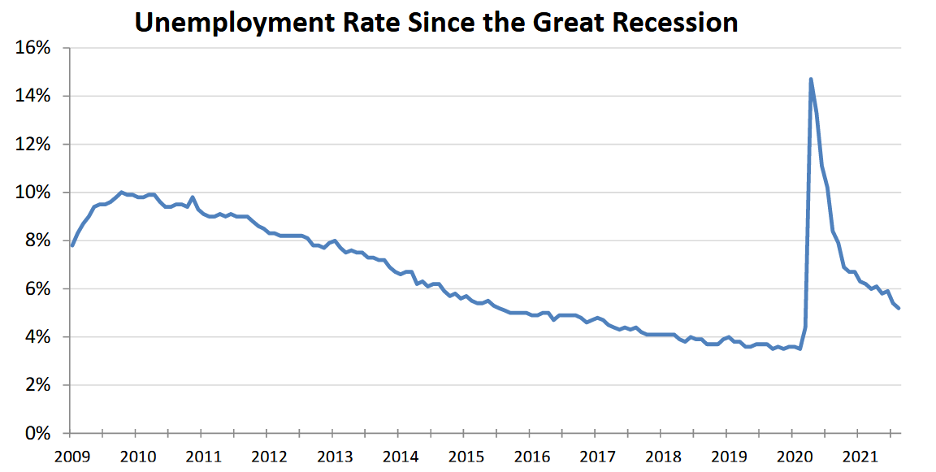 To put it bluntly, Powell feels his work on the labor market side is still far from over.

Much discussion has been made about "help wanted" signs at restaurants and labor shortages at businesses across the U.S. This can be seen in the labor force participation rate remaining depressed at levels lower than at any time since the mid-1970s, as the dark blue line in the chart below shows.

Women entered the workforce en masse in the 1970s, and this depressed labor participation rate is historic when viewed in context.

The slow recovery in labor force participation may have to do with many factors. These include continued fear of catching the coronavirus, elevated savings from generous government assistance, and a massive wave of retirements over the past 18 months.

In any case, the decline has the Fed worried, and for a good reason.

Intuitively, a nation's output, measured by metrics like gross domestic product ("GDP"), is a function of how much "stuff" (goods and services) can be produced with a given amount of capital and labor.

With a lower labor force participation rate, which measures the economy's active workforce, fewer workers are available to create productive output. If the productivity of the remaining workers doesn't make up for this loss, the result will be a slower-growing economy.

All of this means that as Powell fights to get unemployment rates trending lower and participation rates trending higher, monetary policy is likely to stay loose, keeping interest rates historically low and valuations in the stock market high.

Here at Altimetry, we track the factors that drive the economy and stock market over the long run...

When you subscribe to our Altimetry's Hidden Alpha newsletter, you'll not only get access to our monthly large-cap stock picks... but you'll also get the Timetable Investor, which helps you understand the health of the markets and the best places to allocate your money.

So, no matter what stories are dominating headlines and the markets, we find big opportunities for investors using our Uniform Accounting methods... Our analysis pinpoints the market's mispricing of stocks due to distorted metrics around Generally Accepted Accounting Principles ("GAAP").

You can learn more about Hidden Alpha – and how to gain instant access to our latest recommendation – by clicking right here.