A Key Economic Measure Is Flashing 'Red'... Here's Why It's Different This Time

The 'at-home economy' claimed another victim this month, as workers adopt their 'Zoom shirts'...

The retailer that claimed to "dress the president" since Abraham Lincoln was yet another company to fall to the "At-Home Revolution."

Earlier this month, Brooks Brothers filed for bankruptcy. It couldn't survive the lockdowns that closed its stores, nor the lack of demand for its dress clothes with vast numbers of people working from home.

Yet even if Brooks Brothers had survived the shutdowns, it's not clear that would have meant greener pastures on the other side...

As we've regularly discussed, the work-from-home world that has been unlocked isn't going to go away after the pandemic recedes. Of course, employees will go into work more often than they are now – which is not at all... But many have embraced the perks of being able to work from home at least part of the week, and the benefits in terms of productivity and commute time.

Less time spent in the office means less time spent in professional attire, be that a button-down shirt and slacks, or a full three-piece suit and a pocket square. That will directly hit demand for Brooks Brothers' offerings, and for any other stores that seek to dress office workers.

Even when workers find themselves on Zoom video calls, no one would bat an eye if someone wears the same button-down shirt they've worn before. Everyone knows that immediately after that call, you're likely taking that shirt off... Whether you have sweatpants on below the waist or not.

These "Zoom shirts," as they've become called, are replacing the need for a massed professional wardrobe. That's unlikely to change... Because the At-Home Revolution is here to stay.

Over the past six months, traditional metrics have been turned on their head...

As regular Altimetry Daily Authority readers know, every Monday, we discuss how our research can reveal large trends that affect the entire economy. In the December 9 Daily Authority, we talked about a long-term metric for measuring the health of the economy: capacity utilization.

This is a measure of how much of the total infrastructure of an economy is being used. Back in December, the trucking industry was measured at maximum capacity, because almost every driver and truck were on the road making deliveries.

As you can imagine, this number has changed significantly with the pandemic. This is why it's important to revisit this key metric as new data have come in...

Over the past four months, restaurants have been looking for ways to open. Travel companies are unable to make bookings. Brick-and-mortar stores have been forced to limit the capacity of shoppers. And factories across the country have been forced to close as they can't meet social distancing guidelines.

All of this has massively brought down U.S. capacity utilization... and at historic rates.

When measuring capacity utilization, historically, a value above 85% means corporations need significant investment to grow – which can cause inflation. Meanwhile, large dips in capacity utilization are a lagging indicator of a recession. They also signal capital expenditures ("capex") will likely be subdued going forward, as well as lower inflation going forward due to slack in the economy.

While not a surprising drop, this massive decline is a powerful visualization for how much the economy has contracted over the past quarter.

Improving capacity utilization is a great thing for the economy, as it means more people are employed, who then have more money to spend, which in turn employs more people. It also means a need for stronger capex spending from corporations, which leads to a virtuous cycle of spending begetting more spending from this end as well.

Meanwhile, a sharp reduction in utilization brings the opposite effect – a vicious cycle of contraction.

However, the current contraction is different from any other seen in the past 30 years.

Total capacity utilization has been pressured due to social distancing measures rather than structural problems in the wider economy. These measures can be lifted after the quarantine.

This means that as the quarantine restrictions are eased, capacity utilization could rebound aggressively... and far faster than it normally does, assuming there aren't other follow-on issues. Furthermore, if capacity utilization does see a resurgence, that vicious cycle we mentioned above can turn into a new virtuous cycle.

When capacity utilization does recover, it could also lead to a stronger-than-normal recovery in capex.

The next chart measures the age of U.S. business assets, such as factories and machinery. A lower ratio, meaning those assets are more depreciated, means that assets are older.

And right now, the net-to-gross property, plant, and equipment (PP&E) is the oldest it has been in the past 20 years. Take a look... 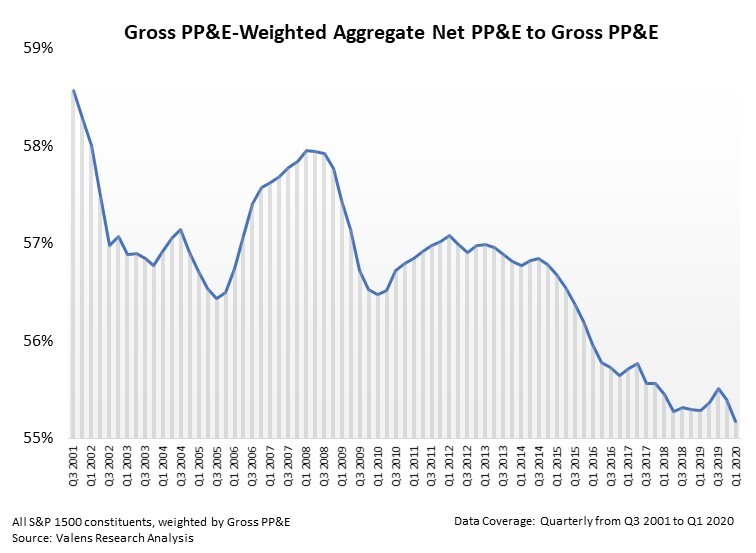 Normally entering a recession – as you can see from the 2001 level at the far left and the bubble in 2007 – net-to-gross PP&E levels are at their peaks. This is because recessions normally happen after a glut of debt and over-excitement about growth opportunities leads to companies with bad financial positions and credit defaults and destruction.

The above chart shows that this time around, things are significantly different.

If capacity rebounds, firms will need to invest in new PP&E to service renewed demand. That means spending could surge even higher than expected through the next few years once there's a strong capacity utilization recovery, as firms build their PP&E back up to historical averages.

It's important to understand how different metrics have been flipped on their head during this year due to unique factors causing this recession. By only looking at one metric in isolation, the story can be lost due to the lack of context. When the pieces are put together, we can sometimes see a different picture.

Traditionally, exceptionally low total capacity utilization is a telltale sign the U.S. has entered a deep and likely long lasting recession, much like in 2008.

And yet, the uniqueness of this pandemic-driven recession – and the position that companies have found themselves in, in terms of investment – mean the recovery could be faster... and could be more amplified by capex spending needs than it has been historically.

That's why Sir John Templeton's four most dangerous words in the world of investing – "this time it's different" – are startlingly accurate for this economic set-up...