Don't Bet Against This Champion of the Franchising Model

One of my mentors just published a new book focused on the corporate lifecycle...

My team and I call him the godfather of adjusted accounting analytics, and it's not said tongue-in-cheek. Bart Madden developed the CFROI framework. It's one of the first methods to focus on something equivalent to what my team and I have also spent years developing: Uniform Accounting.

Bart's new book discusses what he calls the "Pragmatic Theory of the Firm," and focuses on the lifecycle framework and how understanding where a company is in its lifecycle affects valuations for the firm and shareholder value creation.

Daily Authority readers also know the importance we put in research and development (R&D) and other operating intangible investments a company makes under Uniform Accounting. Bart also discusses this in his book in detail, and how important it is to focus on these assets in the modern economy.

I'll always read anything Bart puts together, as my team and I forever think we're learning from his thoughts. I recommend you take a look at his book, which you can order on Amazon.

It's often said that bars and restaurants are some of the worst investments for a budding entrepreneur...

New establishments fail regularly, and even wildly successful ones can have a short half-life. In fact, around 60% of new restaurants fail within the first year.

Compared to the stock market, those are long odds for investors in restaurants.

The issue isn't just the fad nature of these offerings... it's that bars and restaurants are asset-intensive. It's expensive to renovate a location to create a new establishment.

But what if investors could have the upside of a successful bar or restaurant, without having to foot the initial bill? This is what the great franchisors like McDonald's (MCD) or Dunkin' Brands (DNKN) do.

They have franchisees who buy the use of the brand name and take on the capital risk. McDonald's and Dunkin' make money by taking a percentage of revenue and by selling supplies to the franchisee. They don't have to invest in the restaurant at all.

One obvious benefit of this is it means returns are naturally higher, as franchisors don't have as much invested capital tied up.

The other positive is that it actually reduces business volatility. As a significant portion of revenue comes from the supply contract with the franchisee, fluctuations in revenue growth don't directly affect the franchisor.

Another industry taking advantage of this model is the hotel industry. Franchising hotels first began in 1939, when seven motor lodges formed a co-op. Members complied with standards and referred business to each other.

The model quickly spread throughout the U.S.

Hotels with the co-op designation promised adherence to the higher quality standards agreed upon by members. As the franchise model developed, strict standardization in the form of familiar buildings and room rates provided customers with an assurance of consistency.

Furthermore, this gave franchisors the opportunity for rapid expansion, as hotel chains didn't need to spend large amounts of capital on opening a new hotel.

Another innovation that came from these early pioneers of franchising was the idea of market segmentation. Franchisors could introduce brands of different quality under a single overarching umbrella, effectively expanding their potential market.

One of the hotel chains that have best capitalized on these strategies is Marriott (MAR). The company operates chains under the franchising model from the upscale Ritz-Carlton, to the more moderate Fairfield Inn.

Hotel chains like Marriott have been focused on becoming more "asset light," a strategy which should generate higher returns. For instance, Marriott charges fees totaling between 8% to 12% of revenue, effectively licensing out the Marriott name without having to make any investments into hotel infrastructure.

However, as-reported metrics make it look like Marriott isn't executing on this strategy correctly and is poorly managing its hotel franchisees. Marriott's return on assets ("ROA") has settled between 5% and 7%, roughly half the corporate averages. 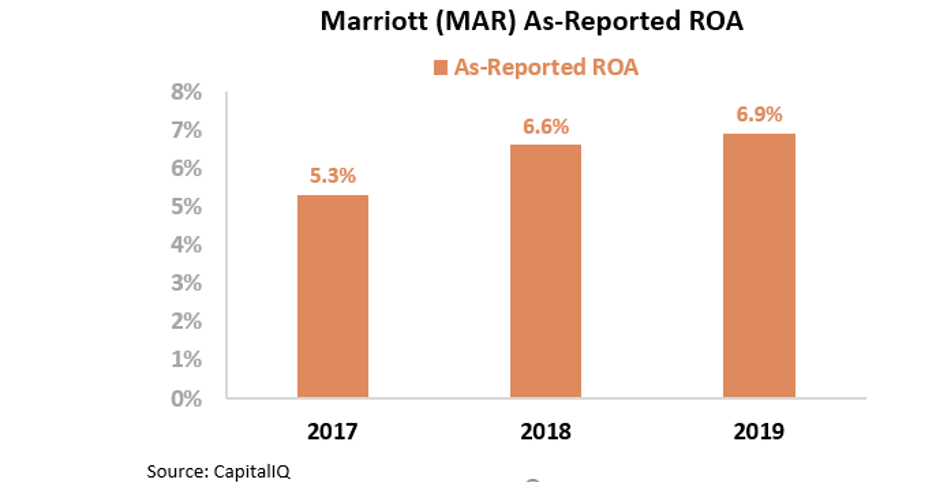 Even with the franchising strategy, it looks like Marriott is running an incredibly low-return business.

However, Wall Street doesn't have the whole story...

Due to the distortions in GAAP accounting and the way this method treats goodwill, among other accounting issues, Marriott has seen its ROA artificially deflated. After we take this distortion into account, we can see the real picture.

Marriott isn't a firm with returns below corporate averages... Rather, its ROA is 77%, albeit shrinking slightly over the past three years in the wake of its merger with Starwood Hotels & Resorts. Take a look...

Marriott's franchise business has led it to impressively high profitability... Just as the model should.

However, Marriott's franchising strategy doesn't appear to have prevented an ROA contraction. As we mentioned, Marriott makes a significant amount of revenue from the percentage of franchisee revenue it takes for the brand license.

Yet even though returns are collapsing in 2020, the market is justifiably seeing through that collapse. We can see this using our Embedded Expectations framework.

The chart below shows Marriott's historical profitability in terms of Uniform ROA (dark blue bars) compared to what analysts expect in the next two years (light blue bars), and what the market is pricing in at current valuations (white bars).

In 2020, Marriott's returns are forecast to fall from 77% to 33% as a result of disruptions in global travel from the pandemic.

However, Marriott is in a strong position to weather the storm, as its franchisees own the potentially problematic assets.

This is why analysts forecast Marriott's Uniform ROA to rebound from 33% to 79% in 2021. Being a franchised business helps make a hotel chain more resilient in a negative cycle.

It's also why the market is pricing Marriott to see returns continue to expand once the pandemic is behind us. The market understands that resiliency.

But investors who are only looking at the as-reported metrics would see Marriott as a struggling firm before the coronavirus struck... And they might think that at these valuations, Marriott would be a prime candidate to sell short.

Fortunately, by looking at Uniform Accounting data, we can see why the company's returns are expected to remain resilient, and avoid making a bad decision betting against one of the best franchisors out there.