U.S. Treasurys serve as an indicator of investor sentiment for the future…

Investing in the U.S. is effectively riskless, so Treasury yields are viewed as a representation of the “risk-free rate.” As this rate rises and falls, it can give investors a view of several important things…

Rates rising signal that investors are worried about inflation or that they’re more bullish about the economy. When rates go down, this is a sign that investors are afraid of hard times and are buying the safest asset they can get their hands on: U.S. government debt.

Back in late January, 10-year U.S. Treasurys fell by around 10% – a sharp contrast to the steady climb over the past six months. This was because Janet Yellen – the U.S. Treasury Secretary and former U.S. Federal Reserve chair – testified to Congress that tax cuts enacted in 2017 for large corporations should be repealed.

This made investors fearful that growth would plateau in the long term, driving down rates.

However, this slide has reversed through February. Rates for 10-year Treasurys climbed to 1.3% late last week, the highest level since February 2020. That was also up from 0.92% to close 2020… It was an impressively fast rally.

This move has been an inverse of the January fall… so investors are starting to grow more concerned about inflationary pressures.

This came to the forefront with the Federal Reserve Open Market Committee (“FOMC”) signaling last week that its members are comfortable with higher inflation for longer, in order to help boost job growth. Along with President Joe Biden’s upcoming $1.9 trillion spending plan, this promises more fuel for the economy.

While inflation may be creeping into investors’ minds, there’s a far more important reason they should monitor Treasury yields…

There isn’t just one yield – there’s a whole curve.

To understand what yields are saying about the economy, we shouldn’t just look at Treasurys that mature at one point in the future. Instead, we can chart out the yield along different time horizons.

Historically, this has been depicted as the “yield curve.” It’s a favorite tool among economists and policymakers because it’s a surefire signal of whether a recession is coming.

As we mentioned, Treasury yields are a good window into market expectations for economic growth in the future. So, looking at yields for different time frames – say, for Treasurys that mature in three months, two years, five years, and 10 years – can give an idea of whether investors expect economic growth to get stronger or weaker over time.

When long-term interest rates are higher than short-term rates, it’s a “positive” yield curve. This signals that investors expect economic growth to build on itself in the future.

On the other hand, an inverted yield curve is a warning sign for investors. This means the market is expecting that at some point in the future, growth is going to slow down significantly… and likely for a while.

Over the past 70 years, an inverted yield curve has always signaled a recession…

That is, if you look at the right yields. Specifically, the three-month and the 10-year Treasury yields.

While it’s not the only reason this signal is so successful, it works because, to some extent, market concerns become self-fulfilling in the real economy.

Banks borrow in the short term and lend in the long term. So, if long-term rates fall to low levels relative to short-term rates, banks don’t make money. Even with the markup they have when they’re lending to others, when adjusted for costs, they can effectively lend at lower rates than they’re borrowing at.

It doesn’t make economic sense for them to be actively making loans. And if some of the people they decline to make loans to need the money to pay back current debt coming due, troubles arise.

We’ve said it many times here at Altimetry Daily Authority: Recessions are sparked by a credit crunch.

As you can see in the chart below, in 2019, the yield curve briefly flipped negative – indicating investors were concerned about a recession. Those concerns proved prescient.

However, as the Fed has injected capital into the economy, the yield curve has grown progressively more positive through late 2020 and into 2021. Take a look… 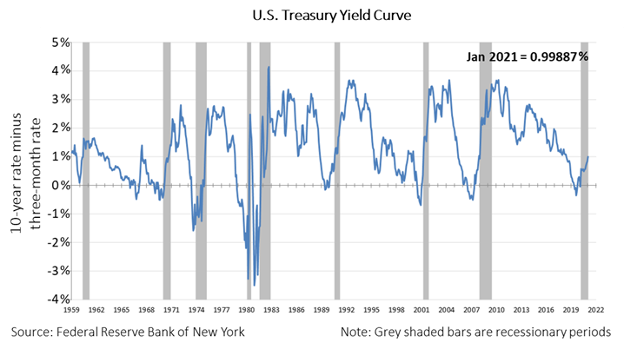 The FOMC has signaled its desire to keep short-term yields low and the yield curve positive. This will help push banks to continue lending and thus help the economy grow.

With a positive yield curve, the spigots of the economy are open, and a positive economic cycle is in the forecast.

A Clever Strategy Has Kept This Airline Alive

The One Rule I Learned From My Consulting Days

A Second 'Roaring Twenties' Could Be Coming... But Ratings Agencies Are Misleading Investors