Here's What to Do in the Wake of the Recent Pullback

The market plunge from late last week into earlier this week certainly has had many folks scrambling to understand what is going on...

This pullback was driven by one simple headline issue, and a few separate underlying problems that have been building over the past two months.

First, let's get to the punchline. This is an opportunity to buy the dip.

We've highlighted how because of issues around overly bullish investor sentiment, along with concerns about near-term corporate growth rates, we were ripe for a pullback. While it could have been for any number of reasons, it was bound to happen eventually.

Our credit work on both corporate and individual access to credit and debt balance health are the reasons we have been telling our readers one simple mantra for when that pullback happens: Buy the dip.

The headlines aren't what matters. Instead, savvy investors look to the underlying fundamental data that drives the market over three months to 10 years.

The data, which we look at daily, are based around deep credit research, a Uniform Accounting understanding of corporate profitability, earnings growth, valuation, government policy, inflation, management and investor sentiment, and many smaller signals.

With such a robust pool of data to build an economic picture, it gives us the confidence to say continue to buy the dip.

Interestingly enough, these are the exact kind of issues that U.S. policy makers are regularly trying to understand. This is why I was recently at the Pentagon, which was a follow-up to the visit I mentioned in August. Here's a picture from my recent visit... 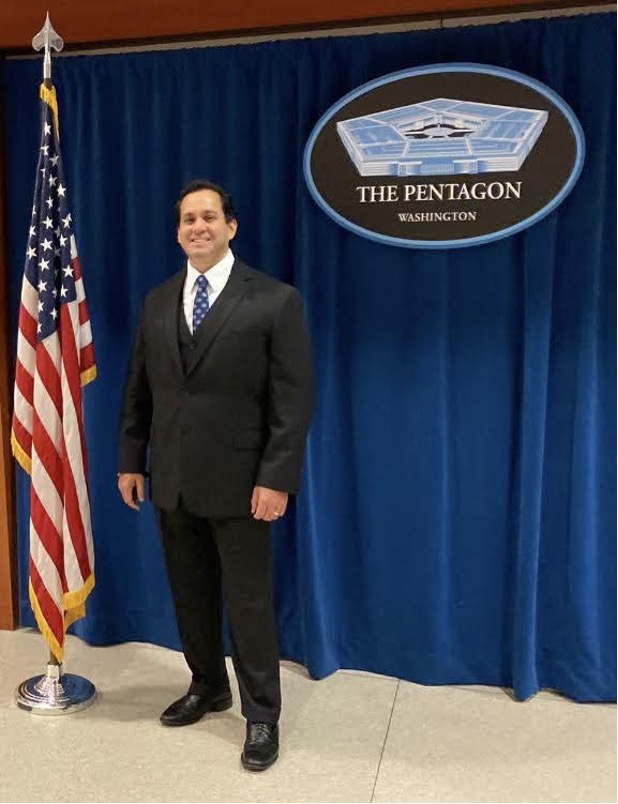 The U.S. government wanted me to come in because policy makers understand, just like the big institutional investors do, the hysteria in the investment media world doesn't even get close to showing the reality of the economic and corporate outlooks.

But I don't blame you for not just taking my word to buy this dip, without talking about the elephant in the room: the headline catalyst for the market drop.

Evergrande (3333.HK), the Chinese property development company with $300 billion in debt, is teetering on the edge of bankruptcy...

Additionally, $80 million in interest payments are coming due. And analysts think that without Chinese government assistance, Evergrande won't be able to survive.

The true chicken littles of the market are saying it might be another Lehman Brothers, so it's no surprise the news has investors panicking.

But this potential issue didn't creep up on investors... The financial media has been talking about the potential for an Evergrande implosion to occur for months, if not even longer.

Here at Altimetry, our Uniform Accounting data have been highlighting the ticking timebomb at Evergrande for some time...

Our Credit Cash Flow Prime ("CCFP") analysis gets to the heart of Evergrande's true credit risk. In the chart below, the stacked bars represent the company's obligations each year for the next five years. We compare these obligations against cash flow (blue line) as well as the cash on hand at the beginning of each period (blue dots) and available cash and undrawn revolver (blue triangles).

Note that the data in the chart are a year old – this is what Evergrande looked like in 2020! The company has consistently been borrowing money in the short-term markets to finance property development that arguably should have been financed with longer-term, stable debt.

This is a classic issue of "maturity mismatching," when a company or individual invests in an asset that has a long payback period – often many years – but borrows debt that matures very soon in order to finance it.

Evergrande was able to get through that massive debt maturity headwall in 2020 not because it had some windfall...

The company had refinanced ¥412 billion in short-term and long-term debt, rolling debt maturities from 2020 into 2021.

With liquidity flush in the system in the midst of the coronavirus pandemic and with few people believing China would ever let Evergrande fail, the company was able to access the credit markets.

Now the narrative has changed... and with it, Evergrande's access to credit markets has evaporated. Lenders are no longer confident that Evergrande has China's backing, or that liquid credit markets mean it can keep on refinancing forever.

And with that backdrop, interest payments coming due this week have brought the issue to a head. As DealBook highlighted earlier this week, Goldman Sachs (GS) strategists think that a collapse could knock $350 billion off of China gross domestic product ("GDP") next year. That's 2% of Chinese GDP.

For folks who remember how interconnected Lehman Brothers was and how the company's default sent shockwaves through the global financial system, it's understandable to be worried.

However, one example from 2008 lines up better with Evergrande than Lehman does...

General Growth Properties ("GGP") was one of the largest mall real estate investment trusts ("REITs") in the U.S. and had a number of prestigious high-quality malls in its portfolio. It had built an impressive set of assets from 1954 through 2008.

In the years coming into 2008, GGP had been financing its organic and acquisitive growth with short-term debt. Even though its properties had decades-long lives, the company was borrowing in the short-term money markets, since it could pay lower interest rates using short-term debt.

Then in 2008, much like right now with Evergrande, with credit markets closed, GGP was caught without a seat when the music stopped. It couldn't refinance its debts that were rapidly maturing. The company went bankrupt, and eventually got picked over by its peers – Brookfield and Simon Property Group (SPG).

But this didn't cause a cataclysmic collapse of the markets like Lehman Brothers did, for a couple reasons...

Now, some folks might say Evergrande is a far bigger issue for China than GGP was for the U.S. GGP had $24 billion in debt compared to Evergrande's $300 billion, and many analysts are calling on Evergrande to be the catalyst for a domino of Chinese real estate repricing – much like the housing crash in the U.S. that led to 2008 global meltdown.

But even if we see a Chinese real estate meltdown, outside of those heavily invested in China, investors don't need to panic...

It's important to remember the context of the economic growth in the 2000s before drawing such a disturbing analogy.

The U.S. consumer fueled global growth in the early 2000s. U.S. personal consumption, a key component of U.S. GDP, rose from roughly $7 trillion in 2001 to $10 trillion in 2008, and that spending powered economic growth across the globe.

Additionally, the U.S. banking system is at the center of the global economy. German Landesbanks, British and Irish lenders, and Japanese bankers all owned massive amount of U.S. mortgage debts... and the global economy relies on the piping that runs through Wall Street, which was at the epicenter of the 2008 crash.

On the other hand, while China is the world's factory, China has also made it a priority over its "economic miracle" for the past several decades to keep as much of its economy off limits from the world as possible.

China is a net lender to the rest of the world, not a net borrower like the U.S. was in 2008, and still is. China also has strong capital controls that limit investor access to its debt and its equity markets. In fact, it was only less than a month ago that BlackRock (BLK), the largest asset manager in the world, was able to launch the first entirely foreign controlled investment fund in China.

Few asset managers have access to China. And global banks that had thought about venturing into China previously have mostly walked away realizing that this was a futile effort.

Even if there is a reckoning in China from Evergrande, the likelihood that it would be a contagion for the rest of the world – and in particular to the U.S. economy and market – is limited.

All the metrics we monitor for U.S. market health continue to be strong. Unlike the metrics for Evergrande and other Chinese companies, U.S. corporate credit health is impeccable, as is consumer credit... and that alone gives us confidence in the trend in the economy in the market.

So, while others may be panicked about Evergrande, by looking at the real data and taking a step back to see the big picture, we can again say with confidence to you... Buy the dip.