Seven Decades of Experience Will Help the Fed Fight Inflation

Check out any financial news, and you'll see the same two critiques directed at the U.S. central bank...

Either the Fed was way too early – or way too late. It's in a lose-lose situation.

But aside from giving Wall Street something new to complain about, this debate raises a key question...

What could the Fed have done differently?

If the Federal Open Market Committee ("FOMC") had raised rates earlier in our economic recovery, we might not have seen such a strong rebound in 2021. It started rate hikes in early 2022, as soon as it recognized inflation wasn't "transitory."

Now, of course, the central bank is hiking rates aggressively. It already raised rates by 1.5%, with at least another 0.75% increase likely this month. It's clearly communicating to the market that it doesn't want current inflation levels to become permanent.

The Fed is trying to thread the needle...

The central bank bided its time until the economy was on firmer footing in 2021. The moment it saw things were working on their own, it got aggressive against inflation.

This environment reminds us of mid-1946, when America experienced similar rampant inflation. Back then, even more so than now, the Fed waited as long as possible to raise rates... until inflation had been burning hot for roughly a year.

As we mentioned last week, when inflation started to pick up, the stock market tanked. But the moment the Fed showed it was interested in fighting inflation, the freefall stopped. Stocks traded mostly sideways for the next year... 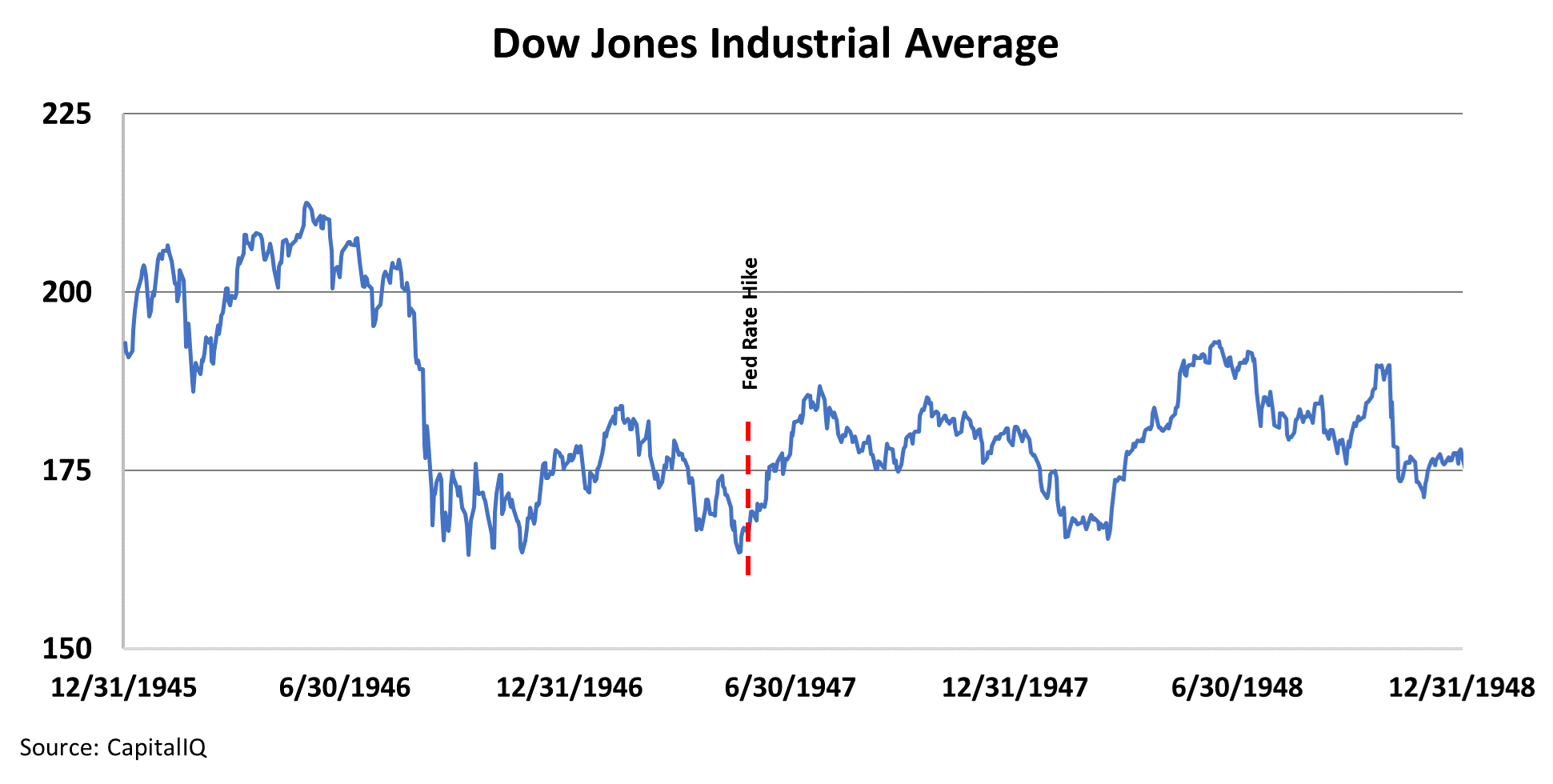 When the Fed finally intervened in 1947, it used a couple of tools...

Three-month U.S. Treasury rates climbed from 0.37% to 1%. The Fed also raised reserve requirements, or the amount of money banks needed to keep with it. That meant banks couldn't lend as much.

The Fed hoped this would be enough to cool things down. And it was right.

Inflation started dropping immediately. The consumer price index fell from 17.7% in June 1947 to less than 9% by that November. A year later, in November 1948, that number was below 5%. The Fed's actions cut inflation by more than two-thirds from its peak. 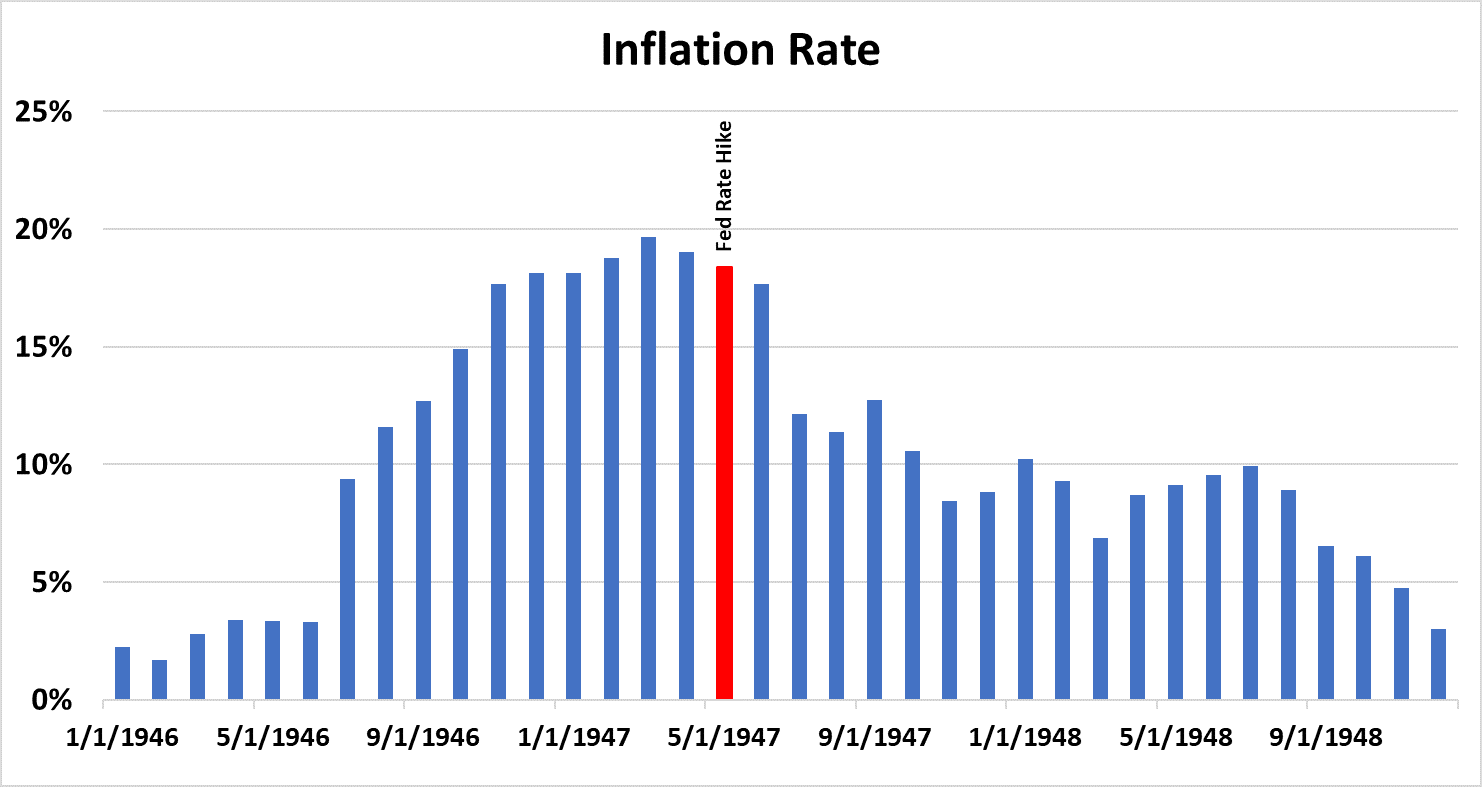 It wasn't just the market that listened to the Fed's moves. Actual realized inflation responded as well.

Now, the Fed is following that playbook again... but faster.

Today's central bank took action just a few quarters after inflation rates hit the mid-single digits. It didn't wait for a year of near-20% inflation.

And similar to last time, it's using both interest rates and another tool in its arsenal...

But rather than adjusting reserve requirements this time, it's using another method. The central bank is no longer buying bonds (also called "quantitative easing") as of March 2022. Instead, it's embracing quantitative tightening.

The Fed isn't just raising rates. It's running down its balance sheet, taking liquidity out of the system.

As the Fed takes action, markets are listening...

The Fed's 75-basis-point bump last month seems to have stabilized things. Two days after that June FOMC meeting, the market put in its low thus far. Since then, it's up roughly 9%.

The market has started to believe that the Fed is serious about stamping out inflation. But it's also wondering if the Fed will be too successful in cooling things down.

Next week, we'll look to history once again to determine what could come next. Check back in next Monday as we discuss what higher rates meant for the economy of the late 1940s.