The Dust Is Starting to Settle... Here's What the Election Means for Your Portfolio

Last week, we discussed how the election could affect taxes and market valuations…

At the time, polling data and statistical analysis were pointing to an easy Democratic win in the House of Representatives, a Joe Biden presidential win, and a likely Democratic Senate. In essence, a “blue wave.”

We highlighted how Biden’s proposed tax plan could affect financial markets. This plan includes raising corporate taxes from 21% to 28% and taxing all capital gains as income for those earning more than $1 million annually.

We received a lot of reader feedback in response… And some folks disagreed with us vehemently. As Jon said…

I think you are totally wrong. Trump wins in a landslide. You must live in a bubble and need to get out in the real world.

Another reader, James from Chicago, highlighted how some of the polls pointed to Trump winning by a small margin. This is absolutely accurate… The range of outcomes wasn’t a certainty, even if most of the data pointed to the “blue wave” scenario being more likely.

Daniel from Tennessee also felt Trump had a greater chance of winning than some of the polls indicated. He stated:

It might be a good idea to talk about Trump winning the election and the effect it would have on the market… it’s a real possibility that he will win reelection.

On the other hand, some of our readers, like Michael, asked if millionaires having to pay more taxes truly “hurts” them, as a higher rate wouldn’t affect their lifestyles too much…

I would like to point out that just because wealthy millionaires must pay more in taxes, it does NOT mean that they are being “hurt” by it. Their lifestyle will not change one iota, so how are they being hurt?

Albert from Reno fairly noted that taxes have plenty of nuances. He also said that broad statements about tax rates for higher earners aren’t totally accurate, which we agree with!

We had one reader so upset we would even write about the possibility of a “blue wave” that he demanded we cancel his subscription. (David, we apologize… We were just doing our best to educate our readers.)

Well, as we write, the “blue wave” appears unlikely. Despite a Biden win and the House of Representatives sustaining its Democratic majority, the Senate will hinge on Georgia alone… and Democrats have a long road to climb to capture both of Georgia’s seats.

Most likely, the Senate will be comprised of more than 50 Republicans and 48 to 49 Democrats. We’ll see a runoff of the top two candidates in each race on January 5. Democrats will need to win both to secure a majority, which may be difficult for the party. Georgia hasn’t elected a Democratic senator since 2000.

This all means that it’s time to reassess the implications of the election. But first, let’s take a deeper look into Michael’s comment on higher taxes for millionaires and whether they “hurt” them…

To be clear, we aren’t making a judgment on whether higher taxes are a positive or negative…

That’s not our job. Instead, we look to understand what higher taxes mean for investors.

One way to think about this is by looking at the Laffer curve, which shows the relationship between the tax rate and how much tax revenue governments collect. At a certain point, people will work less to make more money if the tax rate is too high… since less money ends up in their pockets. 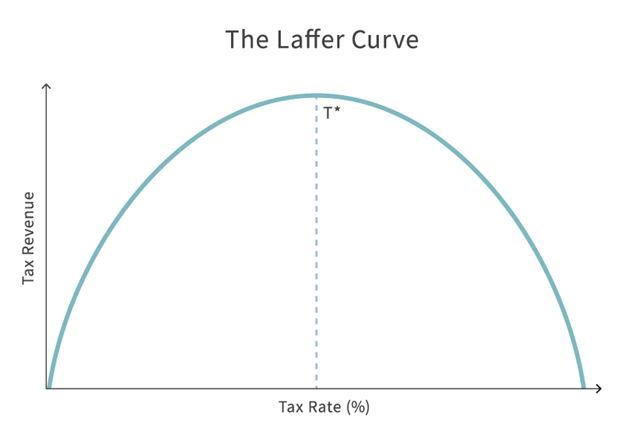 But it’s a bit different when it comes to investment income. Unlike a job, investing is passive. There’s less active “work,” other than the trading and research.

However, investors are still looking for a specific net return, after taxes and inflation. They need these returns to fund retirement, charitable gifts, or other future investments.

When taxes increase, the amount of after-tax income an investor receives declines. To make up the difference, investors need a higher pre-tax return.

The best way to do that is by buying companies at cheaper valuations. By finding stocks trading at lower multiples, investors may be able to garner higher returns.

This is also why we highlighted last week how lower taxes lead to higher realized equity market multiples. A “blue wave” meant an increased probability of higher tax rates, which would cause market price-to-earnings (P/E) ratios to fall. The chart below shows the average P/E ratios in different tax environments. As you can see, the ratio is lower in higher-tax environments… 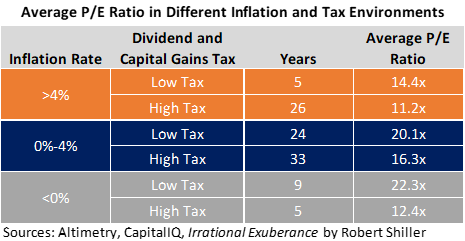 However, this higher-tax scenario isn’t as likely… so the current election implications are good for the markets.

As the old Wall Street adage goes, a split Washington is a good Washington…

This means what we talked about last week, in terms of potential tax changes, is less likely to occur. It also means the potential risk of a one-time tax-driven dip in the market is low.

One of our readers, Joe, agreed with our advice about that dip…

I agree with you that things would remain the same as it has been for the last hundred years, that is, investing for the long-haul is the best picture.

We totally agree with you, Joe: Regardless of the outcome, don’t overreact and rush to hit the “sell” button. Keep the long-term picture in mind. And we can say with confidence that some of the concerns we originally had may no longer be on the table.

P.S. Would you rather we “stay out of politics,” like David clearly would prefer, or continue to inform you when the politics could affect your portfolio? Let us know at [email protected].