This Services Company Is Winning the Complicated 'Green Revolution'

The case for green energy, beyond reaching net zero...

Across the globe, countries are calling for net-zero emissions by making sure they aren't creating more greenhouse gasses than they can remove.

It's an ambitious goal, given that the global economy still mostly depends on fossil fuels. But the vast scientific consensus points to disastrous consequences if humanity as a whole doesn't act quickly to fix the problem of climate change.

Western Europe and China currently lead the pack in setting regulatory examples and funding the necessary research. The U.S., despite being a leader on most other technological fronts, lags behind.

Despite President Joe Biden's focus on addressing climate change, the recent Bipartisan Infrastructure Framework has already received criticism for not only skimping on some infrastructure investments, but also for caving to the oil lobby's obsession with carbon capture technology.

By funding carbon capture, the critics say, Biden is empowering oil companies to protect their core business model. The suggested alternative is to devote those resources to a clean-slate transition in order to achieve a fully renewable economy. Then, the oil giants would pass into history and new companies with no vested interest in fossil fuels would take their place altogether.

If only it were that simple...

Compared to Europe and China, the 'green revolution' faces more headwinds in the U.S. for two major reasons...

First, there's a far greater burden on the raw business case. Without immense government backing as in China and cultural support as in Europe for green technology, green energy companies face a steep uphill battle against a mature oil industry that has spent 150 years perfecting energy generation.

While the cost of wind and solar energy has fallen drastically – and will continue to do so – oil is still phenomenally cheap and consistent. Ignoring the environmental harm, natural gas is still king.

But there's another problem: American political willpower for a transformation is lukewarm at best. Climate change is a deeply political conversation, due in large part to how differently folks interpret climate data. Furthermore, hundreds of thousands of Americans proudly work in the oil business and have a vested interest in their jobs.

Biden's message to oil-friendly regions like the Midwest was that green energy investments will create high-quality, well-paying jobs to offset the oil and gas losses. As it turns out, the picture is bleaker.

Worse yet, a recent New York Times article highlighted that in Midwestern towns like Flint, Michigan, the work offered at solar fields tends not to be the union-quality jobs typical to oil and gas, but low-skill labor earning barely above minimum wage. Solar and wind have a much lower unionization rate... and non-cash benefits are few and far between.

This is because solar and wind installations are so much more operationally efficient. Once installed, they don't demand constant labor like an oil field or a drilling rig might. The limited maintenance required also isn't nearly as dangerous.

The labor breakdown consists of high-paid engineering jobs concentrated in communities more like Silicon Valley than Flint, low-wage and temporary construction jobs, and equipment manufacturing, which tends to be outsourced. This isn't a winning formula for building political willpower.

However, some companies can win despite the difficult situation for green workers...

As bleak as it sounds, the narrative flips on its head when we look at the situation from the corporate perspective.

The same efficiencies that may cause widespread job losses can be valuable for the providers of green infrastructure.

One of those companies is construction and engineering contractor Quanta Services (PWR) – a major builder of clean energy infrastructure. From wind and solar farms to modernizing utility grids, Quanta's projects aim to facilitate the green revolution.

Because Quanta handles the entire process pipeline for its projects, its employees get the sort of wages green energy activists were hoping would show up across the board. For example, reviews on Glassdoor almost all mention the strong compensation.

Quanta is squarely positioned in the sweet spot of the green revolution...

But based on GAAP metrics, the company doesn't seem to be capitalizing on it. Quanta's as-reported return on assets ("ROA") has stagnated around cost-of-capital levels over the past decade... while the green-energy economy began to take off.

However, due to the problems with GAAP accounting, these metrics completely fail to tell the true story.

Instead, let's turn to our Altimeter tool. It condenses our Uniform Accounting research – which removes the GAAP distortions – into easily digestible grades. This lets users quickly and effortlessly see through the as-reported financial "noise."

Quanta gets a "C" for its Earning Power grade due to its mediocre 15% ROA for 2021. However, as green investment in the U.S. has continued, Quanta's trend of improving returns means the company gets an "A" grade for Earning Power Trend. Overall, Quanta earns a "B" Altimeter grade. 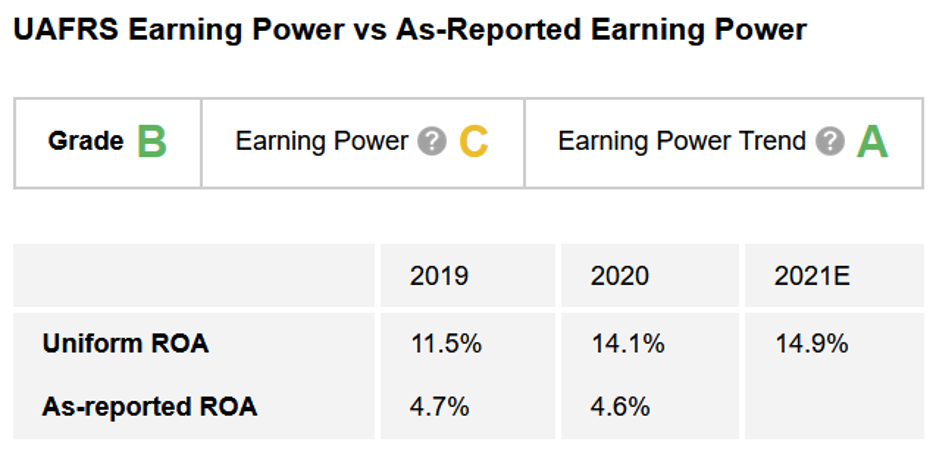 But remember, as we said yesterday when discussing cannabis stocks, just because a company has strong tailwinds doesn't mean its stock is a buy...

If the broad market knows the same thing, those tailwinds could already be baked into the current share price... and big upside ahead could be limited.

Hence, we've also assigned Quanta grades for valuations based on Uniform Accounting. If you're an Altimeter subscriber, click here to see the valuation grades... and whether the market has already figured this one out.

If you aren't a subscriber, don't miss out on the full story based on the real numbers. Learn more about The Altimeter – as well as how to gain access to the full grading for Quanta and more than 4,000 other companies – right here.