This Stock Wins No Matter Who Dominates the 'Streaming Wars'

When the news broke that Disney (DIS) is pulling its content off Netflix (NFLX) – which I touched on yesterday – picking a service became a harder decision.

With names like Apple TV+, Disney+, HBO Max, AT&T TV Now, NBCUniversal, and Discovery, you may soon be paying more than $50 a month just on streaming services.

But there's an equally difficult decision you need to make that you likely haven't considered – one that impacts how you watch all those carefully selected streaming services...

You need to pick a streaming device.

That's right... before you can catch up on the latest episodes of Planet Earth or The Simpsons, you need a device to access your services.

Obviously, you can watch most of these on your phone or computer with no problem. But in order to watch streaming services on your TV, you need to hook it up to a magic little device. Your set-top box won't cut it anymore.

The options are nearly as endless... Besides pricey smart TVs, you can pick from the big-name Amazon Fire Stick, Google Chromecast, or Apple TV, among others.

There's a streaming device for everybody, from the ultra-cheap Chromecast to the top-of-the-line Nvidia Shield.

But when you need something in the middle, the best option is often from Roku (ROKU)...

Roku regularly dominates the "best of" lists from the folks at tech-focused sites like Wired, Wirecutter, and CNet. It offers the Streaming Stick+ that plugs into your TV, a standalone hockey-puck size Ultra model, and even its own smart-TV software.

But when viewed through a traditional accounting lens, Roku looks like a terrible company. Its as-reported return on assets ("ROA") number is negative.

Of course, we specialize in "Uniform Accounting" – a more reliable way of looking at companies than the GAAP and IFRS accounting policies, which are designed to be unclear and misleading.

If we look at Roku's cleaned-up numbers, we can see it is a profitable business. 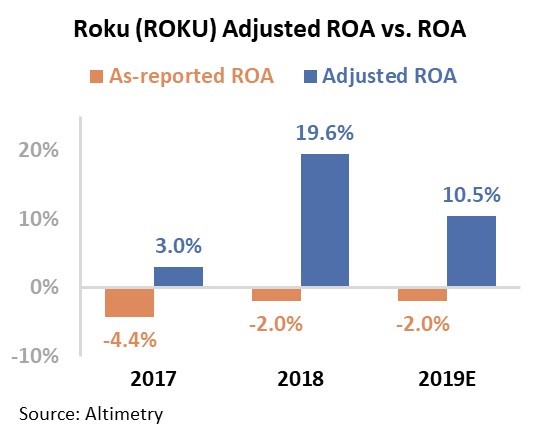 And the fact is, this is a much more valuable number for investors...

If you would have realized this discrepancy in December 2018 and added a ROKU position, you'd be up more than 400% today.

That's the power of Uniform Accounting.

Roku's rebound from its December lows makes no sense for a business that is supposedly losing money year after year. It only makes sense when you know the company's real numbers.

When we apply our Uniform Accounting metrics, the distortions from as-reported accounting statements are removed – including capitalization versus expensing leases and research and development ("R&D"), and stock option expense distortions – and we can immediately see that Roku has much stronger ROA than the market realizes.

Not only that, but Roku has been profitable for as long as it has been a public company...

The panel above explains the company's historical corporate performance levels, in terms of ROA (dark blue bars). Generally, the company has seen ROA grow from 4% in 2015 up to peak 20% levels in 2018.

Roku makes great products in a successful niche. It also benefits greatly from the growth in streaming services over the last several months.

You might wonder why a negative-ROA business would see its stock grow more than 400% in less than a year...

It all starts to make sense when you see the company's true profitability by using Uniform Accounting.

This is yet another example of why you can't rely on so-called standard accounting practices.