The market thinks a 'real' recession is on the horizon...

We've spent the past two weeks discussing how the Federal Reserve is now aggressively focused on raising interest rates. And on the flip side, many folks have been banging the drum about how we're technically in a recession right now.

Two weeks ago, it was announced that the U.S. had experienced its second consecutive quarter of negative gross domestic product ("GDP") growth. According to the simplest definition, that means we're in a recession.

Now, in our opinion, if you look at the data we've covered recently on several occasions, we know the reality. This is a recession in name only – not a real recession.

Many of the most important indicators that signal a recession – from credit standards and defaults to employment data – all point to a healthy economy. And one of those metrics is even still a little too hot.

At this point, most economists think that a recession will come in 2023. More than half say it will start in the first half of the year.

Whether in the first or second half of 2023, most experts seem to believe it's no longer a matter of if a recession is coming. It's a matter of when.

Recall that much like now, the Fed raised rates in 1947 in an attempt to rein in post-war inflation, which was caused by supply-chain issues and surging consumer spending.

It worked. Within six months, inflation had been cut in half. A year later, it was below 5%... down by more than two-thirds.

But a little more than 18 months later, the other impact of higher rates came home to roost. The Fed was so successful at cooling things off that in 1949, the economy tipped into a recession.

However, it wasn't the epic economic collapse you might be picturing...

The 1949 "recession" was nothing like the Great Depression... or the 2008 financial crisis.

This dip was much milder. GDP growth was negative in the first two quarters. It fell 1.4%, then another 0.3%.

Default rates rose, fueling the recession. But they didn't explode.

This was hardly a devastating economic mess. The Fed did its job. It engineered an economic cooldown so well that we even briefly saw a deflationary period. When the glut of pent-up savings washed away, prices actually fell from May 1949 to June 1950.

But based on recent history, you'd probably assume that the market tanked in that recession. As you can see in the chart below, that wasn't the case. The market was range-bound since inflation exploded in 1946. And it only retested the low of that range. 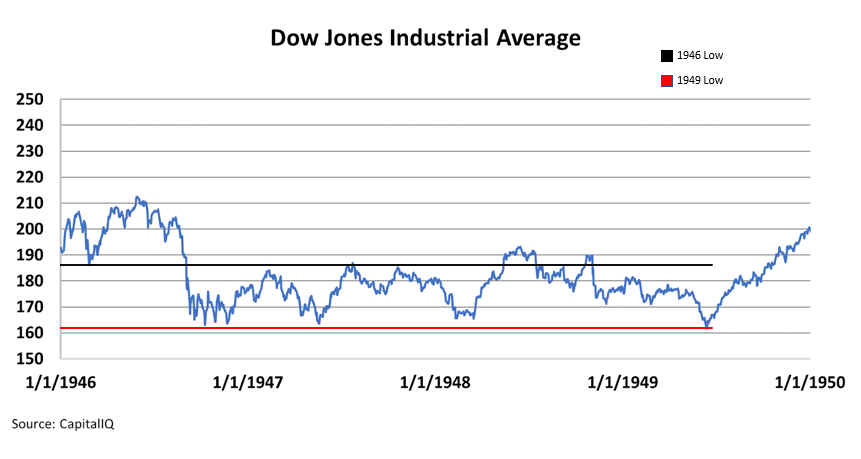 Once inflation spiked, the market immediately decided that a downturn was inevitable. Either the Fed would raise rates and force a recession to tame inflation... or inflation would run rampant.

Said another way, the market baked in the Fed's actions ahead of time – and then basically watched the data. When things started to look better, the market rallied between the low of 160 and the high of 190. When economic data got worse, the market sold off.

Strategic investors who stayed in the right industries fared the best. Transportation stocks got crushed, while utilities did well. So did industrials, thanks to investment in rebuilding factories to meet demand.

This was a market where themes mattered... and where tactical investing mattered as well.

Here's the takeaway for today's economy...

If we expect history to repeat – as opposed to just rhyming, which is generally the case – we'd be looking at a recession 18 months from the Fed's first rate hike. That would bring us to late third-quarter 2023.

The data backs that up. The debt load for companies is nothing to worry about now, but it could become a problem in early 2024. If interest rates remain stable through late 2023, when companies start looking to refinance, it could spell trouble.

Companies will need to pay twice as much in financing costs as they did in late 2019 and early 2020. For the most part, corporations have plenty of cash on hand and enough cash flow to handle these issues. But it might be enough to tip over the weakest borrowers.

Just like in 1949, the Fed is certainly focused on taming inflation this time around. It will engineer whatever kind of economic "landing" it needs to get inflation under control.

This means if the numbers don't come down in the next three to six months, the Fed will continue to raise rates until inflation starts to crack. And that points to a potential recession in late 2023 or early 2024.

And yet, much like in the late 1940s, that doesn't mean the market has to crash further from here. After the drop we've seen this year, investors may already be pricing in the potential for a recession.

They're just waiting to see what will really happen.

We know this because of how low their expectations for Uniform return on assets ("ROA") are going forward.

The chart below shows past ROA for U.S. public companies reached 12% in 2021. And in 2022, analysts forecast that number will be even higher.

However, with the Fed looking to slow the economy and inflation, ROA may not explode as much as analysts expect. But the market is not pricing that in.

So if history repeats, the market is already pricing that in.

Investors don't need to worry about the floor dropping out from under them. This next recession isn't going to be a world ender. We believe we'll see a milder Fed-engineered contraction.

If that happens, get ready for a sideways market for the next year and a half.

Investors will need to be tactical. You'll need to zero in on the few themes and industries that could buck this trend.

But that's only if history repeats. If history rhymes, there's another potential path the markets could take. Next week, we'll discuss what to expect if the recessionary clouds start to clear.

P.S. No matter which path the market takes next, one specific industry is set to benefit from massive investment. This sector has the potential to buck a sideways market for the next 18-plus months – or lead the way higher if the clouds clear sooner.

My team and I have put together a special presentation with all the details of this critical opportunity... including how a select few stocks could take off in the coming months. Learn more here.