Investors Aren't 'Irrationally Exuberant'... And That's Great for the Market

This election season has been unlike any other in recent history…

With the coronavirus pandemic forcing the major party candidates away from the usual volume of in-person campaigning, strategies have needed to change. Moreover, President Trump’s positive coronavirus test at the beginning of the month certainly made for a dramatic “October surprise.”

Analysts are scrambling to identify historical patterns to understand how to invest during what has proven to be a unique election year. Jefferies and Bloomberg both recently published charts showing past performance in election years since 1928.

Given the market’s aversion to uncertainty, this makes sense. Policies like corporate tax rates can have large effects on corporate profitability, so whoever controls the Oval Office can have a large impact on the stock market.

The expectation is that returns will begin to normalize after the election and the stock market will bounce back. Historically, stocks performed poorly in the month after an election – averaging a slight loss. Then, the markets begin to rise.

However, the results skew towards the positive side, with a median gain of 0.3%.

Looking to history is important, as it can provide insight into what may happen leading up to and after the presidential election.

However, looking at many of these data points means examining average performance streams…

That means any conclusion is largely “garbage in, garbage out” for looking at these data. A better understanding of the range of potential outcomes for market moves can come from looking at that catalyst in the right context.

In the short term, investor sentiment gives us the best signal for how the market will react to events…

Understanding sentiment can tell us whether the market will react severely to bad news or shrug off negative headlines and surge higher on good news.

One powerful way to quantify investor sentiment is through the Equity Allocation Survey, as we talked about last year.

The data come from the National Association of Active Investment Managers. Each week, this organization asks its member firms how much exposure they have to the equity markets.

The money managers’ report encompasses a range of values from negative 200% to positive 200% due to the possibility of leverage. The higher the value is, the greater the average investor’s exposure to equity markets. A higher value also implies a more bullish sentiment about the stock market.

The chart below shows investor sentiment since the beginning of 2019. Throughout last year, investors were relatively “neutral” about the market.

It wasn’t until this year when sentiment shifted. Even before the pandemic hit the U.S. in March, investors began to move out of equities. By late February, investor sentiment was heading toward two-year lows – near 20% equity market participation.

This hyper-pessimistic positioning meant that in late March, barring an economic collapse, there was no one left to sell stocks! This oversold sentiment helped contribute to the strong rebound in the market through April – as investors voted with their wallets and rushed back into the market.

The positive survey results continued to rise all the way until August. Investors were bullish because they were expecting the world to return to normal. Moreover, they thought that corporate earnings would continue to be strong after the pandemic.

It got to the point in late August where, in the span of five months, the market had gone from significantly oversold to levels that normally signal “overbought” conditions. There were no marginal buyers, because everyone was “all in.”

Unsurprisingly, with this lack of marginal buyers, the market took a breather, and sentiment moderated. Over the past few months, investors looked past the potential risks to the recovery… but in September and October, they started to pay more attention and moderate their confidence. 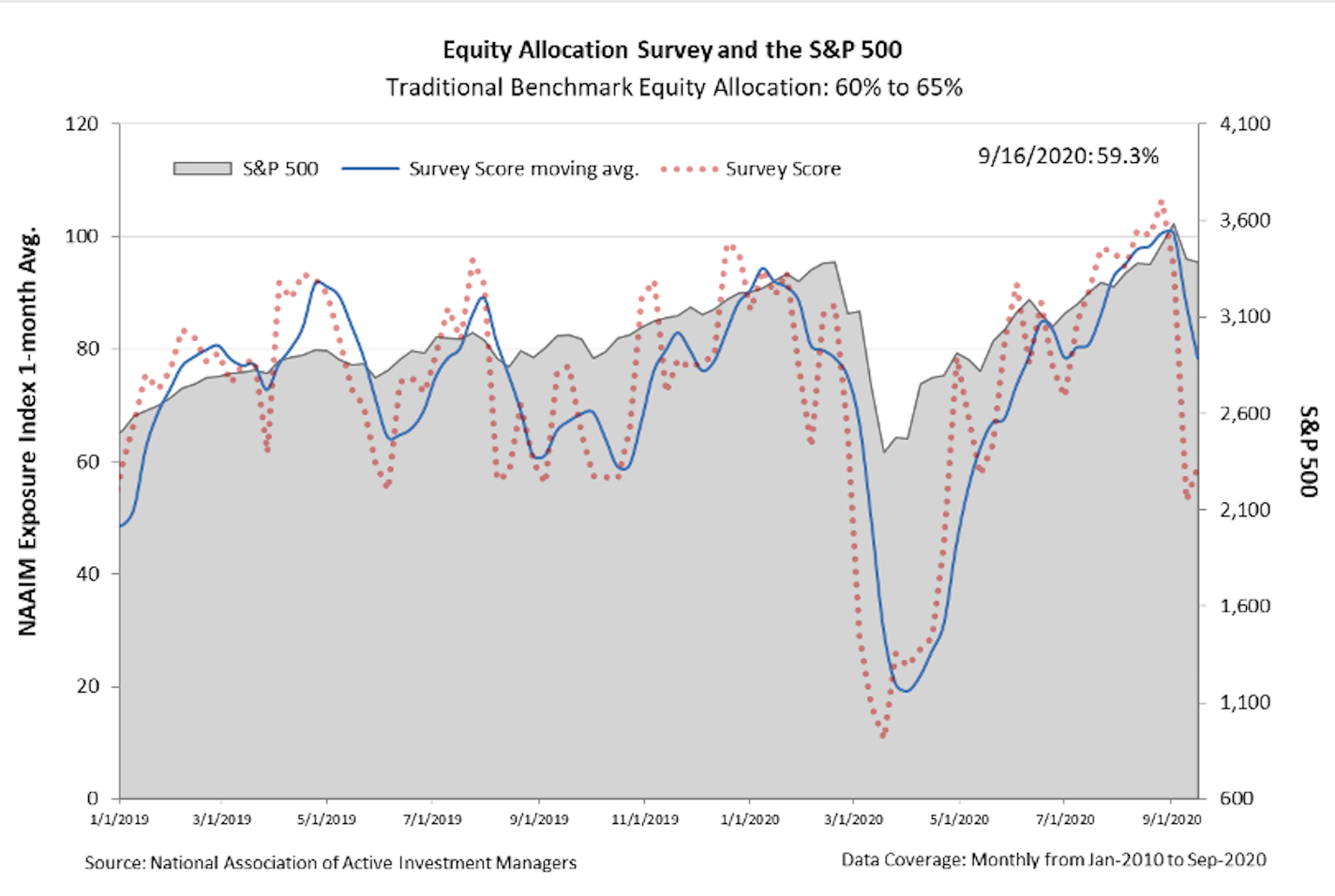 At first glance, this sharp drop in investor sentiment may seem bearish. However, this is like a “safety valve” for the market. The drop from “irrationally exuberant” levels helps wash out the market… and now that sentiment is more calm, it reduces the likelihood of a significant further drop. Since some people can be comfortable looking to value buy, investors overall still aren’t all-in.

The market isn’t ignoring the risks of negative events, and pricing is starting to reflect more uncertainty. If negative events do occur, the market may already be prepared. Furthermore, the risk of a further collapse is low when considering the credit signals we’ve been highlighting recently.

Given that companies have access to credit if something goes wrong, the possibility of a “black swan” event ballooning into a credit crunch is unlikely, so this healthy pause can be just that: a pause.

We live in uncertain times. Between the pandemic and the election, it’s hard to feel confident about any market stability. However, looking at relevant data points can give us clues about what may happen going forward… in a way that just looking at prior election cycles can’t.

With all of this in mind, investors should continue to remain confident in the overall market.