Joel’s note: Following Tuesday’s runoff election in Georgia, it appears the Democratic Party has taken a one-vote majority in the Senate. The Democrats have captured the weakest possible “Blue Wave” that pundits discussed.

This has folks wondering what that means for your wealth and the companies you invest in. Fortunately, we covered this topic last year ahead of the election: first on August 3, and again on November 2.

In both Altimetry Daily Authority issues, we discussed how it was highly unlikely that the worse-case scenario for the stock market would come to pass. Concerns about massively higher corporate and investor taxes would be unlikely to play out even with a Blue Wave.

Even if some tax legislation came to pass, it would likely be muted… and it would take some time to be clear what would pass – meaning the market wasn’t doomed to drop 30% because of Democrat-controlled Legislative and Executive branches.

As we said at the time, the Democrats would have a thin margin at best in the Senate, with moderates like West Virginia’s Joe Manchin as the deciding vote – thus limiting the most dramatic changes that might negatively affect investor portfolios.

On the other hand, in the short term, this Blue Wave may give investors more reason for optimism – as the rally in the market yesterday highlighted. Congress is more likely to pass more stimulus that can help the economy recover strongly from the pandemic in 2021 and beyond.

With an eye on the government, it’s an appropriate time to discuss some ways that it has affected different industries. So now, with that context for our market outlook, let’s return to our regular Altimetry Daily Authority…

In normal conditions, vaccines can take upwards of 10 years to progress from their beginning stages to distribution. For the coronavirus, the entire process took only nine months.

It shows the power of the world’s scientific prowess and knowledge. Additionally, it shows what the private and public sectors can accomplish when working together.

While the vaccine creation by private companies and institutions was inspirational, it also came with a lot of government assistance.

The U.S. government gave massive support to companies like Moderna (MRNA) through Operation Warp Speed. The vaccine was a testament to the power of combining free-market capitalism and government support.

In times of crisis like this – and with the kind of technological leap forward we’ve seen – it’s often the government’s job to be the “insurer of uncertainty” and power innovation in areas the market deems too risky for private investors to take all the risk on themselves.

For the coronavirus vaccine, the costs needed and the risk of no payout with an unsuccessful trial were high… so the government needed to bridge the gap.

Additionally, the government’s assistance didn’t just start with Operation Warp Speed. In previous decades, the government supported pure research and development (R&D) investments in messenger RNA (“mRNA”) and ribosomes. Research into both areas were instrumental in the construction of the coronavirus vaccine.

With a long research timeline on these products, the government was a necessary investor. Without the government, these ubiquitous technologies may have come to market later than they did.

We discussed two of the most prominent companies in the industry last year. We looked at Boeing (BA) and Airbus (AIR.PA) and how their respective national governments affect profitability and returns. There has been much debate about the direct and indirect support that both companies’ governments give them to succeed.

Today, let’s look solely at the U.S. aerospace industry with our Altimeter tool.

Aerospace is split into two subcategories: commercial and defense.

Boeing dominates the commercial part of the industry. It builds commercial aircrafts for most domestic airlines. The sector has a multiyear or decade-long R&D cycle. If Boeing wants to build a new aircraft, like the 737 MAX, it comes out of the company’s own pocket.

On the other hand, the U.S. military underwrites most of that type of investment on the defense side. While the R&D cycle is similarly long, there’s less risk due to government investments.

Using the screening tool on The Altimeter, we can see how investing in a company in the defense side of the industry is likely to be far more successful. This is true thanks to both superior profitability and valuation.

Companies like Lockheed Martin (LMT) and Northrop Grumman (NOC) rely heavily on the U.S. government and receive higher Altimeter grades. Seventy percent of Lockheed’s sales and 85% of Northrop’s sales come from the government – providing both companies with a consistent and high-spending customer. This means Lockheed and Northrop have both sustained above-average Uniform returns on assets (“ROAs”) for more than a decade.

Thanks to their positioning – and therefore high returns – these companies get high Altimeter grades for Performance. They’re “B”-graded names that signal high quality and flat-to-improving returns.

Companies with more exposure to the commercial side of the industry have lower grades. While Boeing and Raytheon Technologies (RTX) do business with the government, commercial sales make up a larger portion of sales than for Lockheed and Northrop. Raytheon in particular has grown its commercial business due to its merger with United Technologies last year.

Both companies make long-term investments with little public help, which pulls down returns due to increased volatility. Raytheon’s returns currently hover near corporate-average levels, while Boeing’s are often below average.

This means that these companies get low Altimeter grades for Performance. Both Boeing and Raytheon get failing “F” grades on returns and trend in returns.

Despite this implicit volatility, the market often places a premium on commercial companies, which means valuations are higher than defense aerospace companies. 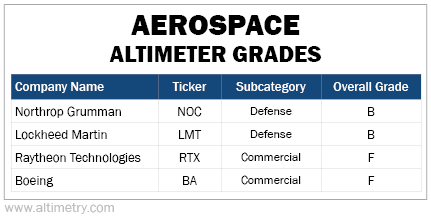 Perhaps investors who are uncomfortable investing side by side with the military are missing how high returns are for defense firms.

The Altimeter shows us that in aggregate, partnering with the government can create a higher-quality company that investors are missing right now. Betting on more commercially focused companies means taking on more risk… which may not pay off.

P.S. This type of analysis is available on the entire U.S. investable universe using The Altimeter. Through the power of Uniform Accounting and looking at the real numbers, you can get the right understanding of industries and companies in your own portfolio. Learn more about The Altimeter right here.

Here's the Company Primed to Prosper With New Year's Resolutions

Despite Big Demand, Rating Agencies Are Treating This Homebuilding Supplier Like It's 2008

Management's Outlook Gives Us a Secret View Into the Market's Direction