For Alan Kay, it was all about perspective...

Kay is best known for contributing the "windows" concept to personal computing. That's the idea that you could have multiple points of view open at the same time with a graphic user interface.

As one of the true pioneers of the computer industry, Kay worked at the famous Xerox Palo Alto Research Center ("PARC"). Many amazing discoveries and inventions took place there, from the Ethernet to laser printing.

We can thank Kay for not having to shut off one app every time we open another. And it's because of him that we can overlap multiple applications at the same time.

This ability provides each of us with multiple perspectives. It can lend a bigger context to whatever we're doing, be it shopping... stock-picking... or just playing games.

Kay understood the importance of looking at things a different way. One of his most famous quotes was that "point of view is worth 80 IQ points."

Said another way, the right perspective on a situation can give you a new and improved understanding of the world.

The average IQ score is 100. Only 2.2% of people score 130 or above. So adding 80 points to almost any IQ score gets you into genius territory.

That's the power of a superior point of view.

You may have noticed this in your everyday relationships. Think of the old adage, "Put yourself in another person's shoes."

Looking at the world through someone else's perspective – be it a friend, colleague, or even an entire country – can do wonders for your understanding of the world.

Kay's brilliance extends to the markets, too...

The wrong perspective can lead you to make poor investing decisions.

On the subject of bad investing advice, I have to bring up the mainstream media... and the celebrities chosen to create sensationalist headlines.

The media purposely finds poor perspectives for examining market movements. The "right" point of view isn't newsworthy most of the time. Listening to the financial news today, you'd think we were in the midst of one of the worst bear markets ever.

These networks roll out such bad perspectives as those from Robert Kiyosaki, author of financial-literacy book Rich Dad Poor Dad... and Mohamed El-Erian, an economist whose track record of making bad market calls rivals Kiyosaki's.

Now, it's important to note that much of the fault lies with the networks. The news programs are paid based on how many eyeballs watch them. And you get more viewers by taking strong stances – particularly stances that make people nervous.

El-Erian and Kiyosaki are both successful in their careers. They just clearly don't mind taking the "bear" case on air, no matter how the market is doing... 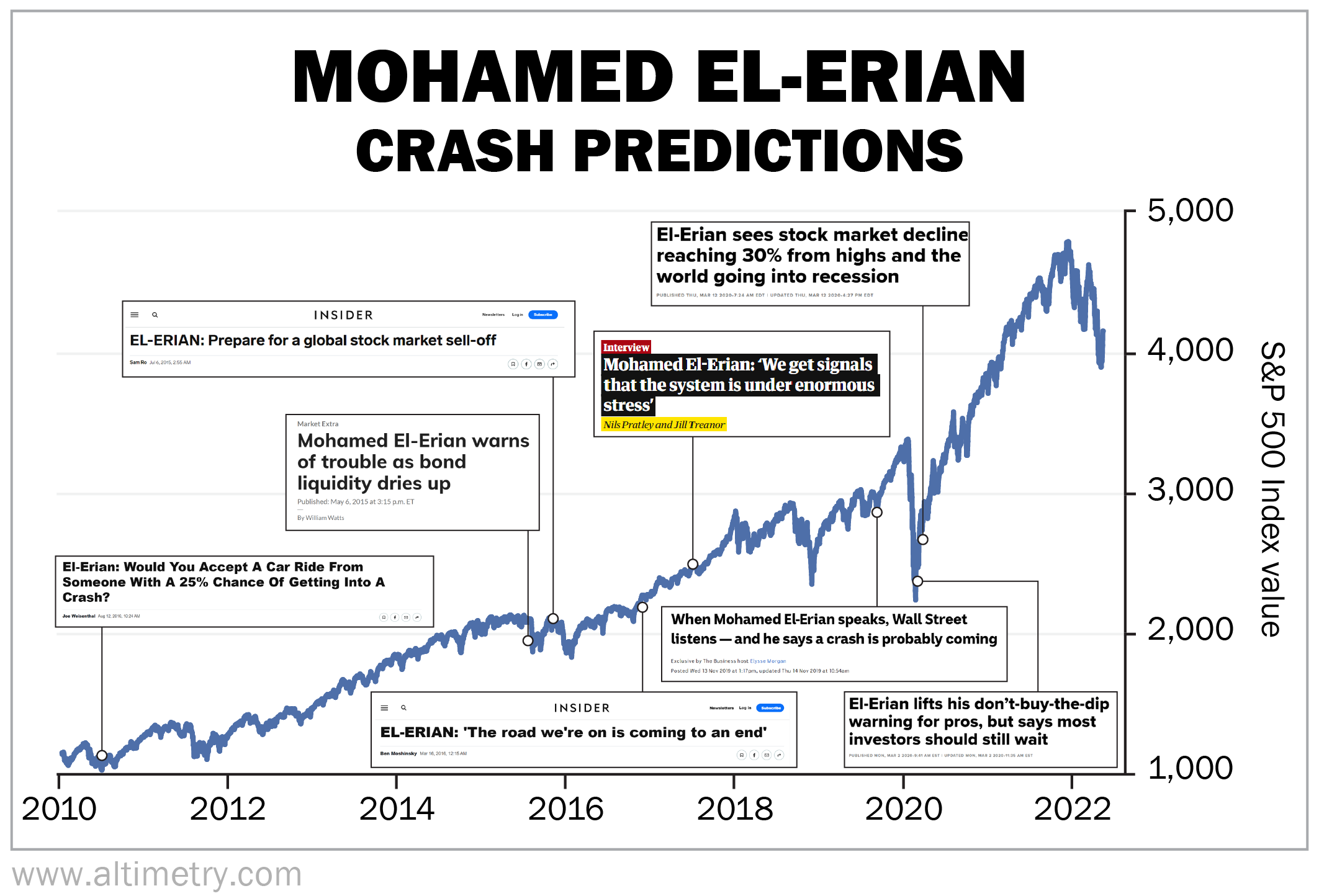 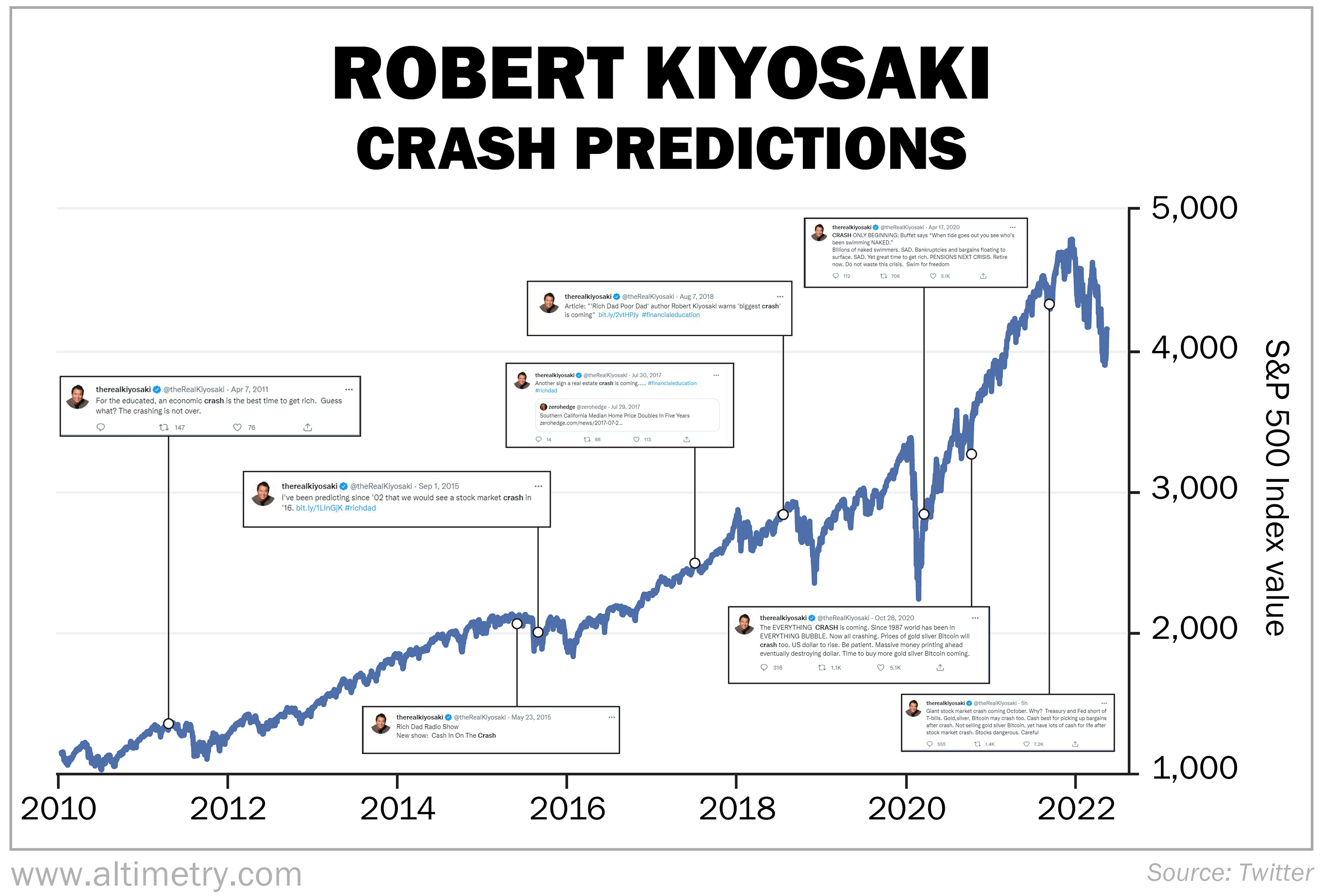 In both cases, they've been pretty consistently bearish for more than a decade. Their points of view haven't changed much... even as market conditions changed constantly.

This cheapens the commentary. Sure, they're right sometimes. A broken clock is also right twice a day.

This point of view sells. That's why it doesn't have to change as the data changes.

That's not what Alan Kay was talking about...

Bad decisions come from having preconceived points of view. Many folks are likely making bad calls because they're selecting data to back up their opinions, not the other way around. (This is called "confirmation bias.")

There's a lot of talk right now about the stock market's doom. The mainstream media would have you believe that things are already bad... and they're about to get horrible.

That's why you need to widen the viewing aperture.

The story changes over a slightly longer time frame. The index is still up more than 75% from its 2020 lows.

The talking heads are focused on today's depressed levels. They're not considering that the S&P 500 is still well above pre-pandemic highs.

That's not because the market is overvalued. It's because corporate earnings remain much higher today than they were at the highest levels before the pandemic.

They're also not factoring in credit... an oft-overlooked, yet impactful, component of valuations. As we explained in August, U.S. corporate balance sheets are holding strong.

That's nothing like what happened in 2008, when our research showed some terrifying default riskiness.

And as I explained on Monday, share buybacks were down more than 10% in the third quarter. That has been accompanied by increased capital investment. That's a good sign for the economy in 2023.

In short, don't let the headlines scare you into panic-selling...

As Alan Kay noted, you have to widen your point of view.

This hasn't been a fun year for most investors' portfolios. Even so, try to look at your brokerage statements from a new perspective.

Don't get caught up in the media's bias toward day-to-day market fluctuations. Instead, look at the bigger picture through a long-term lens. It will help you resist the big emotional swings the media tries to feed you.

Consult more sources over a longer time frame... and use all the tools at your disposal. That's how you gain the knowledge to get ahead of the market.

After all, you could add 80 IQ points' worth of perspective to your investing arsenal.

Wishing you love, joy, and peace,