What Investor Sentiment Can Tell Us About This Historic Bull Market

Can a fresh face solve an old problem?

On November 12, we wrote about how conglomerate General Electric (GE) still doesn't look cheap despite its shares falling from $31 to $11 over the past three years.

One of the reasons why GE still looks so expensive is because the company still has a significant amount of debt on its balance sheet. This has been an issue for GE since before the Great Recession.

As such, the company's decision to bring Carolina Dybeck Happe in as the new chief financial officer may be a good sign. During her time at shipping giant Maersk she significantly improved the company's credit profile while also helping to restructure the corporate portfolio. This is much like the effort she'll need to undertake at GE.

We wish her good luck... and patience. Even if she makes a lot of improvements, the stock may not move much as market expectations are still high.

Let's see what investor sentiment says about the future of the market...

A month ago, we wrote about the differences between investing in the S&P 500 and real estate. In that essay, we used the example of investing with margin to illustrate the risk inherent in real estate investing.

Today, let's talk about how investing with margin can be used to gauge the health of market sentiment.

Here at Altimetry, we've often talked about how corporate-credit trends can be used to measure market cycles – such as how every recession has begun with a credit crunch or how credit default swaps show credit risk. Corporate debt is the only credit datapoint that is relevant when understanding the markets. And individual investors can also borrow – this is known as "buying on margin."

To understand the relationship between margin investments and general market trends, it's important to understand what buying on margin is, and why investors do it.

Buying on margin, put simply, is using debt to finance the purchase of a security. The Federal Reserve Board has set a limit on margin purchasing of 50%, which means that an investor can borrow up to 50% of the purchase price of the security.

There are some types of margin structures that let investors exceed that level, but this is a good place to start the discussion.

As with any loan, such as a home or auto loan, the initial loan must be paid back to the brokerage house with interest. However, an investor does not owe the lender any of the gains or losses from his trade. Therefore, buying on margin allows an investor to magnify his returns in the stock market – much like how we discussed leverage amplifying the return in real estate investments.

For example, if an investor wanted to buy $50 of retail giant Walmart (WMT) on margin before Black Friday, he could borrow another $50 to double his investment. If Walmart sees strong Black Friday demand and its shares jumped 10% higher, this investor would make a 20% return, minus the cost to borrow – as he would sell his $110 position, return the $50 and any small interest expense, and keep $60.

However, if instead Walmart's payment system goes down and the company loses customers who end up buying their goods online on Amazon and WMT shares fell 10%, our hypothetical investor would lose 20%. He would be forced to sell at $90, but return the full $50 back to the brokerage... thus keeping only $40. Due to the impact of leverage, buying on margin carries risk only the most bullish of investors would take on.

So understanding how these investors' sentiment is trending is a valuable tool for understanding market conditions. As investor sentiment heats up, and more investors are willing to invest using margin to magnify their returns, the market accelerates.

But if the market runs up on a significant amount of margin debt, it can mean the rally has poor support. Those same bullish investors will be the first to rush for the exits on any sign of weakness. Their buying would drive up the market, and their selling would turn that rally into a rout.

Similarly, if the market rallies even without significant margin debt growth, it can be a sign that stronger hands are supporting the rally. The money flowing into the market is not from speculators... it's from investors.

To illustrate how this relationship generally works, the chart below tracks the amount of margin debt and the value of the S&P 500. As you can see, for the most part there is a very strong relationship between the trend of the market, and the debt being deployed in the market... 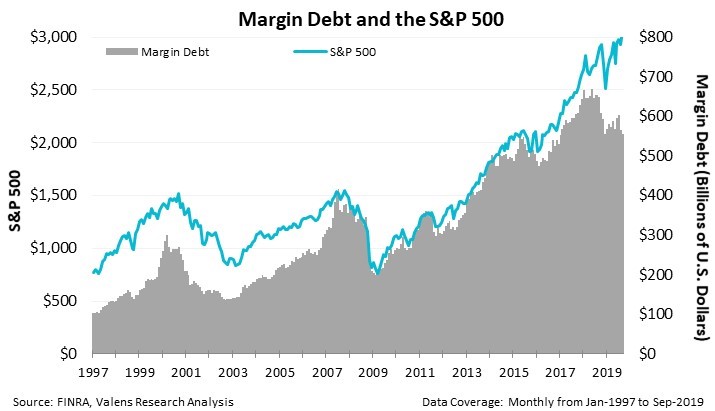 But there is autocorrelation here... This is when one variable is correlated to another because the first variable directly impacts the second variable.

By only looking at the absolute debt levels, this chart does not clearly demonstrate how margin illustrates the overall trend in investor sentiment. However, by comparing the S&P 500 to an index of margin debt, a clearer pattern emerges...

A higher level of margin indexed to the S&P 500 would signal investors were very bullish, and any pullback could be more severe. That's not the case right now.

In May 2018, margin debt reached its highest level ever achieved: nearly $670 billion. However, since then, debt used for investment has leveled off. By looking at the indexed margin debt levels, we can see how margin levels have been falling over the past year... 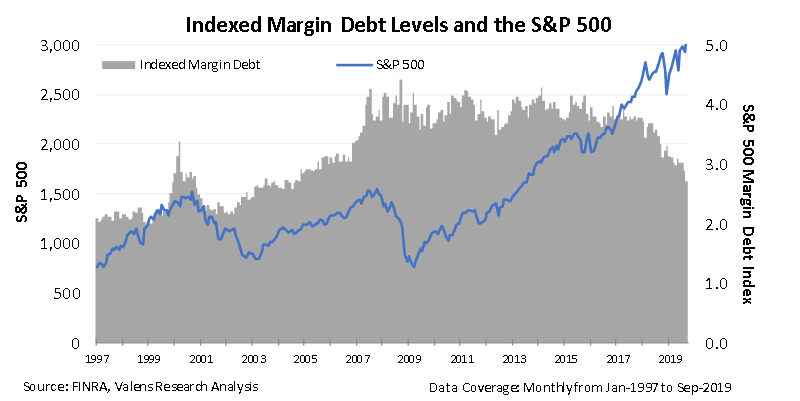 This decline in margin levels means that even as the S&P 500 has rallied, investors have grown more wary of the market. This reflects current fear about the trade war and the upcoming election, among other drivers.

Sentiment is now at levels approaching the doldrums of 2001 to 2003. While we shouldn't look at one metric on its own when looking at market sentiment, according to this metric, even as we sit at all-time highs, there is still ample room for investors to get more bullish and push this market higher.

We've talked about how a recession does not happen without a credit crunch. Investor credit can also create a sentiment driven sell-off, but without extended investor credit, that's also off the table. This is yet another reason why we think this bull market still has room to run before we need to worry about it getting too hot.