Tightening Credit Standards Can Indicate a Recession... But We're Not There Yet

We often write fondly about some of history’s greatest investors…

We can learn valuable lessons about stock picking and fundamental analysis from the careers and investing philosophies of legends like Warren Buffett, Shelby Davis, and Seth Klarman. In fact, much of what we’ve learned from their approaches to financial analysis has influenced the Uniform Accounting framework.

Today, rather than focus on a famous stock picker, we’re highlighting possibly the greatest stock trader of all time…

Jesse Livermore was a pioneer in what we would today call “day trading.” His career spanned the late 19th century through the Great Depression, which would have been a difficult time to invest for most people.

That said, through the market crash in 1929, Livermore was able to make a few savvy trades that led him to be one of the wealthiest people in America – amassing a $100 million fortune (more than $1.5 billion in today’s dollars).

His success during the Depression was far from a fluke – he made similar trades betting on railroads around the turn of the century, ahead of the 1906 San Francisco earthquake, and leading up to the Panic of 1907.

Livermore still remains one of the most studied traders, especially for his ideas around technical analysis and emotional investing.

In many ways, Livermore was ahead of his time. He understood some of the principles of investing that many investors today fail to consider.

You’ll notice the trades we listed above were mostly during times of market panic… and that’s no coincidence. Livermore understood the connection between credit and equity, and he was able to successfully short the stock market because of that understanding.

In the early 1900s, far fewer investors understood the connection between credit availability and market crashes… and it wasn’t possible to quickly monitor credit.

However, Livermore had a unique workaround to monitor credit availability…

After moving to New York and making a name for himself on Wall Street, he was able to call just about any bank in Manhattan for a loan. He would carefully analyze the answers he received – if banks were willing to give him a loan with little hesitation, that was a sign that markets were operating normally.

Sometimes, banks would ask him to put up some collateral in exchange for a loan. While that wasn’t inherently concerning, it signaled to Livermore that he had to proceed with caution and monitor the situation closely.

From time to time, he would start receiving truly concerning signals from his “bank survey.” The banks would either turn down his request, or require that he put up nearly the entire loan amount as collateral.

This signaled to Livermore that banks were not willing to lend anymore – a surefire signal that trouble was brewing for equity markets. This is when he would make his move.

We’ve written repeatedly in Altimetry Daily Authority about the importance of monitoring credit availability for corporations, investors, and households to understand economic and equity cycles.

In a source for a chart in one of our corporate credit articles, we sourced a tool developed by the Federal Reserve that’s meant to emulate Livermore’s bank survey – the Senior Loan Officer Opinion Survey (“SLOOS”).

The results from the survey are a good way to monitor credit availability and the impact it may have on equity markets. The chart below highlights quarterly SLOOS results of banks tightening credit standards compared with the S&P 500 Index since 1990. Take a look… 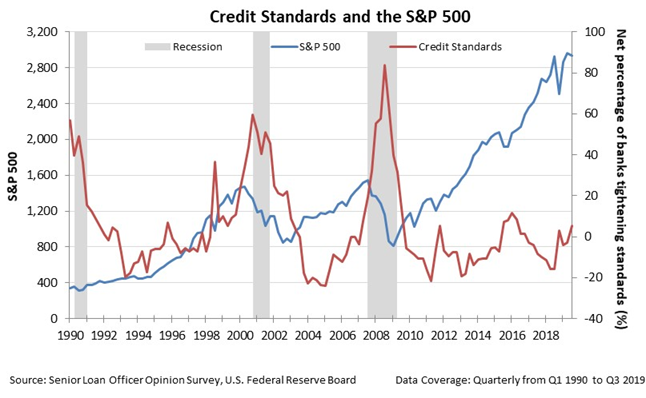 As you can see, there’s a strong relationship between high levels of tightening and a recession. Each of the three recessions covered in the chart were preceded by more than 50% of reporting banks tightening their credit standards.

Looking at today’s results, we can see that credit standards tightened slightly in the third quarter of 2019… but only by about 5%.

One might think that should give investors reason for pause. In reality, that just means that banks are starting to tighten.

We can learn a lot by thinking like Livermore. When he heard that banks were starting to tighten credit, that just meant the economy was hot… which was a good time for investing.

When it becomes tough to find access to credit at all is when we need to be concerned. Clearly, we’re far from that issue right now. This is yet another reason why we remain positive for the coming quarters.

I’m writing you from India, where I was also talking about credit’s importance last week…

While I spend a lot of time in East Asia, I don’t generally find myself in India. But speaking at the conference reinforced all the issues we often talk about here in Altimetry Daily Authority when we talk about macro topics.

The conference is equity-based, but the society asked me to give a presentation on credit and how it impacts the equity market. Since India has been navigating a challenging bank credit crisis over the past few years that has taken a toll on the economy, folks at the society were interested in what I had to say.

Across the globe, understanding the trends in credit explains a great deal about the broader trends in equity and economic cycles… beyond just here in the U.S.